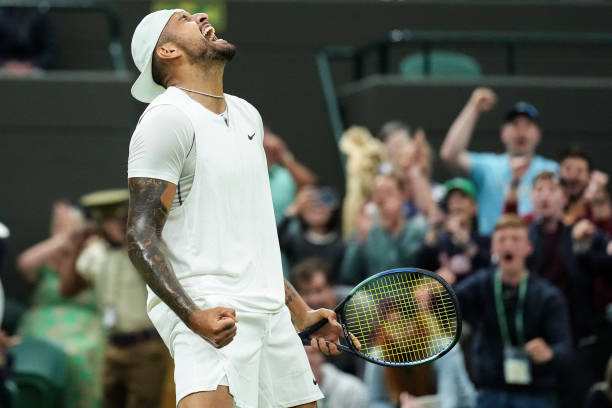 Nick Kyrgios recovered from a set down to beat fourth seed Stefanos Tsitsipas during an eagerly-anticipated clash not without controversy and multiple flashpoints. Elsewhere, there were morale-boosting victories for Rafael Nadal and his compatriot Paula Badosa, after Iga Swiatek’s 37-match winning streak was snapped by giantkiller Alize Cornet. Read on for more. 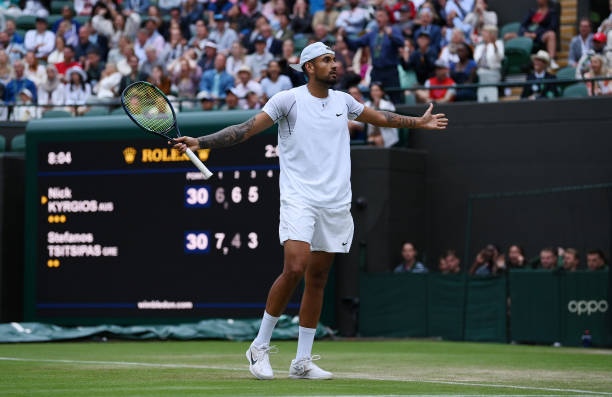 Saturday saw a fiery R3 clash between Kyrgios-Tsitsipas live up to the billing on Court 1, as expected

Ah, Nick Kyrgios. It certainly feels as though every time he’s in a marquee matchup or controversy surrounds his match even just a little, there’s an uneasy clamour of critics and some sections of fans alike quick to denounce his presence as one the sport shouldn’t be welcoming.

It’s tedious, often exaggerated and quite predictable when instead the focus should be on his tennis – peaking at the right time this year – which is also why he so openly says things like this:

"Everywhere I go, I'm seeing full stadiums. The media loves to write that I'm bad for the sport, but I'm clearly not." pic.twitter.com/K3u0fWIXv8

This was aptly billed as the match of the day and ultimately, there was always a chance Mallorca champ Stefanos Tsitsipas would be upset here. The manner in which it all unfolded visibly unsettled the fourth seed and Kyrgios’ tactics – like them or not – subsequently worked a treat.

It wasn’t difficult to tell Tsitsipas, for all his problem-solving capabilities, was clearly rattled and understandably so. Despite frequently being under pressure in set one, he buckled down to ultimately win it — though maintaining a cool head and not showing his hand wouldn’t last.

“It's constant bullying. He bullies his opponents. He was probably a bully in school, too. I don't like bullies. He has some qualities, but he has a very evil side to him."

As Kyrgios bayed for him to be defaulted, the 23-year-old was suddenly cast a villain, while the gentleman up the other end of the court had finally decided after two hours he wanted to play.

Those were his words to a very busy umpire Damien Dumusois, not mine. But play he certainly did, shredding break points on serve with numerous clutch shots and while threatening to implode as the finish line neared, Kyrgios kept drawing errors from the Tsitsipas backhand.

That proved decisive in the end, saving two set points en route to a hard-fought four-set win. You couldn’t help but feel the bullish Australian was on the verge of a considerable drop-off had they gone to a decider, though he held firm when it mattered most to ensure that wasn’t needed.

Up next? America’s promising 20-year-old Brandon Nakashima on Monday after he beat Colombia’s Daniel Elahi Galan Riveros 6-4, 6-4, 6-1: another matchup he’ll fancy his chances in.

Kyrgios’ compatriot Alex de Minaur [19] was made to work hard for it in a testing third set, but eventually dismissed British wildcard Liam Broady – who recovered from 2-1 down to oust Diego Schwartzman [12] in a five-set tussle during the previous round – prevailing 6-3, 6-4, 7-5. 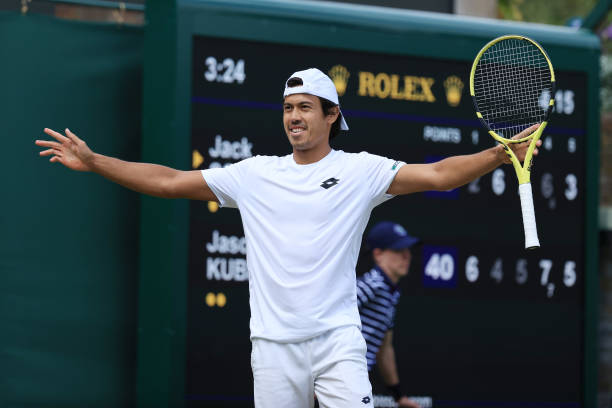 Kubler celebrates reaching round four, and is the last qualifier standing in the main draw

Speaking of Aussies, there’s another into R4, and his name is 29-year-old qualifier Jason Kubler.

Having only made the main draw here once before (2018), the former world number one junior has been plagued by a hereditary knee condition which has seen him undergo six surgeries and receive medical advice suggesting he shouldn’t continue competing on the pro circuit.

Nonetheless, he has defied those odds and is into the second week at a Major for the first time after recovering from two sets to one down, eventually overcoming a fellow qualifier in America’s Jack Sock – a former world no. 8 – with the final scoreline reading 6-2, 4-6, 5-7, 7-6, 6-3.

He’ll play Indian Wells champion and another American in Taylor Fritz [11] to start next week, after his straight-sets streak continued against Slovenia’s Alex Molcan (6-4, 6-1, 7-6). 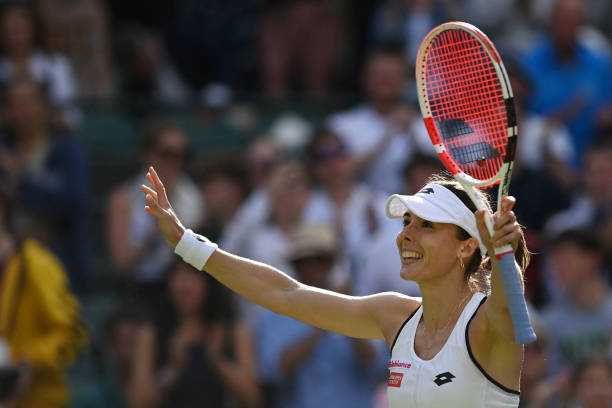 History repeating itself: The giantkiller does it again

If there was someone capable of ending Iga Swiatek’s winning run, on grass, in this section, Alize Cornet was handpicked to complete the task. Actually going through with it, executing points well and keeping the world no. 1 honest during rallies, was a whole different beast.

But she did it beautifully, and after hinting at retirement and is ageing like fine wine at 32 – something the Frenchwoman eluded to during her on-court interview afterwards.

Sure, Swiatek was spraying errors like they were going out of fashion. She’s still not super comfortable on grass, but that doesn’t diminish the weight of achievement here.

Swiatek: "I tried many things to feel better on court, on grass court, but it didn't really work out. That's why I'm not even hard on myself because, like, it's kind of logic that if I couldn't find it even on practices, I'm not going to find it on a match."#Wimbledon

She’ll play last year’s quarter-finalist Ajla Tomljanovic for a last-eight berth, after the Croatian- Australian importantly refused to dwell on a sluggish start and eventually recovered from a set down to outlast 2021 French Open champion Barbora Krecjikova [13] 2-6, 6-4, 6-3.

Having ended a surprising scoreline in its tracks down 6-4 against Britain’s Harriet Dart on Thursday, Australian Open quarter-finalist Jessica Pegula couldn’t recover from a set down in consecutive matches, as the eighth seed lost 6-2, 7-6 against Croatia’s Petra Martic.

Heavy-handed Kazakh Elena Rybakina awaits the 31-year-old on Monday, after coming through 7-6, 7-5 against China’s Qinwen Zheng.

In a clash of two talented American youngsters, Amanda Anisimova recovered from a set down to overwhelm French Open runner-up Coco Gauff. It was littered with unforced errors by both, multiple momentum swings and more, so here’s a quick summary in the form of three pictures:

Anisimova remained positive and recovered in style, as evidenced by these set two stats

Yesterday, I spoke about Rafael Nadal’s need to improve as the rounds went on after gritting through his first two matches. He certainly did that vs. an unpredictable quantity in Italy’s Lorenzo Sonego [27], winning 6-1, 6-2, 6-4 – though this wasn’t shy of heated contention either:

In further drama, Rafa Nadal is having a prolonged conversation with Lorenzo Sonego after beating him in straight sets.

Looks like they are going to discuss it afterwards…#Wimbledon

Rafael Nadal apologises to Lorenzo Sonego: "I was wrong. I should not call him on the net. I apologise for that. My mistake."

FEATURED MATCHES TO LOOK OUT FOR, ON DAY 7 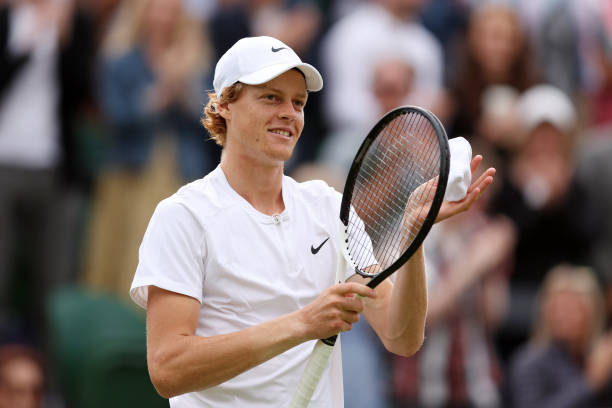 Having quietly made his way into the fourth round, can Sinner stun Alcaraz on Sunday afternoon?