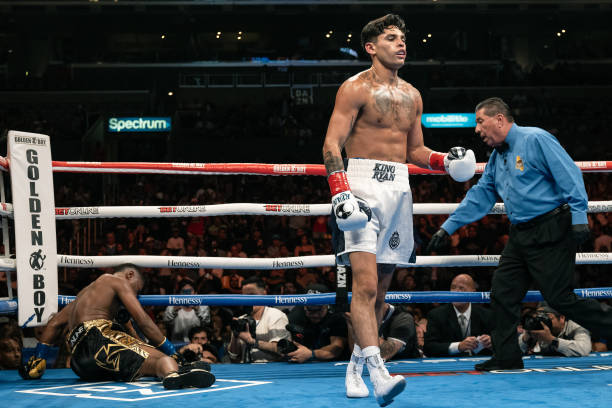 All during fight week, newly-converted super-lightweight contender Ryan Garcia spoke bullishly of having supreme confidence, both in his ability and mindset, to do what he had set out to against former WBA super-featherweight champion Javier Fortuna at the weekend. Afterwards, the 23-year-old called it a career-best win before again calling for a Gervonta Davis megafight. 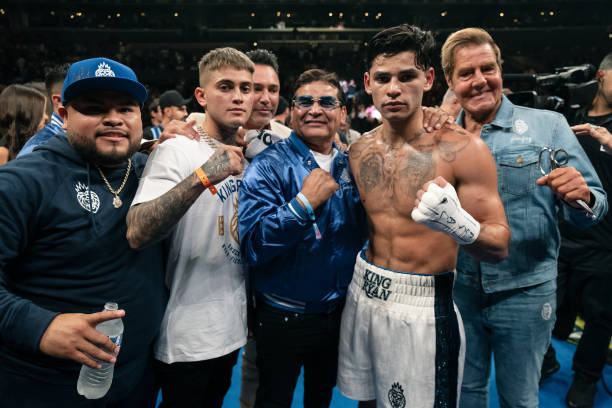 Buoyed by an ominous start where Fortuna found limited success and seemed overawed by the task at hand, Garcia scored knockdowns in three consecutive rounds en route to a sixth-round stoppage win over a 33-year-old with two defeats in a year, a first during his 13-year pro career.

A beautifully-placed body shot deep in R4 saw Fortuna fold, before the veteran’s sneaky tactics – and an unaware referee – gave him additional recovery time after spitting out his mouthguard. Undisputed lightweight titlist Devin Haney called the move crafty between rounds.

He survived that round and the next, where Garcia landed clean on his face with a whipping left hook which was met by an involuntary but telling reaction borne from raw pain and shock.

The Dominican kept swinging wildly and landed a few power punches of his own as the commentators questioned if he’d go out on his shield. They soon had their answer early in R6.

Garcia’s output was much higher, he landed more accurately and Fortuna underwhelmed in truth

Garcia stayed composed and knew if he picked his shots well, the knockout punch was on its way. A three-shot combo, finished with another lethal left-hander, saw Fortuna crumble to the canvas again. This time, mercifully proceedings were stopped.

Given the physical discrepancies between them and that Garcia holds naturally a much bigger frame, detractors will suggest this KO win wasn’t particularly special. All things considered, from mental health issues and an untimely wrist injury blow late last year, this level of activity is.

It’s easy to rubbish the achievement after the fact, but KingRy did nothing to dispel an ever-growing notion that he’s among boxing’s burgeoning stars. Plenty of celebrities were in attendance, as they often are whenever a select few others are in town. Now, he needs a foil.

That role has long been mooted as three-weight world champion Gervonta Davis’ territory.

However, the sport’s needless politics and network divide between them (Garcia on DAZN, Davis on PBC) meant a potential matchup has merely been deemed the stuff of dreams rather than a potential reality as they’ve separately maintained unblemish records with highlight reel KOs.

Garcia was seen exchanging pleasantries with Davis’ last opponent Rolando Romero during his ringwalk, and it’s easy to see the allure behind a potential Davis-Garcia matchup.

See y’all the end of the year..#TheONE

Although a genuine knockout threat (27-0, 25 KOs), the former has proven he’s a hittable target with a much smaller frame ala Fortuna, albeit more skilled and heavy-handed in comparison.

This fight was originally slated to take place at 135lbs, but Fortuna reportedly couldn’t make that weight so they agreed to a 140lb compromise. Garcia doubled down on his desire to remain at SLW moving forward, with everyone else of potential interest for him at 135lbs currently booked.

Haney owes George Kambosos Jr a rematch as per their two-fight contractual negotiations, while former unified champion Teofimo Lopez prepares to make his super-lightweight debut on Aug. 13 against Pedro Campa. It feels like a matter of time before they all move up in weight.

There’s gonna be riots if he [Davis] don’t want to do it. I know that I’m committed to it, I told everybody that’s where my heart’s positioned and I’m not going to waver for nobody.

That is gonna get me the respect I deserve, I’m never afraid. I have the spirit of competition in me, you’ll see that when I fight Tank and whoop his ass.”

The only man on the list twice is former SLW champion Regis Prograis, a disgruntled free agent

Haney owes George Kambosos Jr a rematch as per their two-fight contractual negotiations, while former unified champion Teofimo Lopez prepares to make his super-lightweight debut on Aug. 13 against Pedro Campa. It feels like a matter of time before they all move up in weight.

Ryan’s not the first to make the move, but judging by this display, there’s no reason he cannot be the example for others to follow as his young contemporaries assess their long-term options.