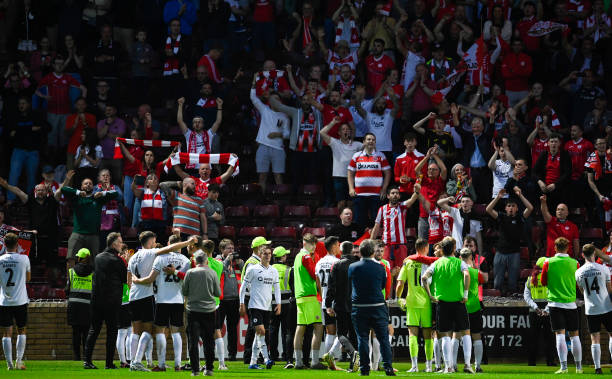 Sligo Rovers have a slender one-goal lead to protect against Scottish Premiership side Motherwell as they look to progress into the final round of this season’s Europa Conference League Qualifiers, with kick-off at the sold-out Showgrounds from 7pm tomorrow night. 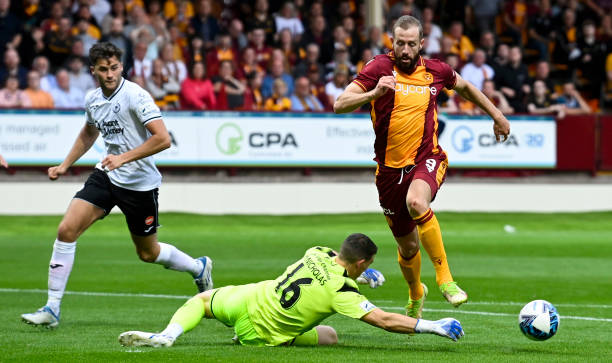 McNicholas (16, in green) was a reliable wall for Sligo players to rely on – they need more of the same

The winner of this tie will travel to play either Champions League regulars Sparta Prague or Norwegian side Viking on August 4 in the first leg of the competition’s final qualifying round, with their clash finely posed after a goalless draw in Prague last week.

On an evening punctuated by important saves and missed opportunities too, goalkeeper Luke McNicholas stepped into the breach with distinction and kept a hard-fought clean sheet after fan favourite Edward McGinty’s departure for Oxford United was confirmed hours before kick-off.

The club described his showing against Bala Town in the previous round as one of the best ever seen from a Rovers’ player, so McNicholas will need to replicate his safe hands under duress.

Showing anticipation to twice keep Josh Morris at bay, he also made sharp stops to deny Barry Maguire, Blair Spittal and Kevin van Veen as the latter charged at goal early in the second-half.

On another day, William Fitzgerald would’ve had a brace. Max Mata, who signed a contract extension on Tuesday, might’ve had one too with better composure in the final third during a lively cameo from the subs’ bench. The young Kiwi is again named in their matchday squad.

But as Motherwell fans vociferously booed their players at full-time, their coaching staff will take heart from the fact the deficit to overturn here is merely a goal. It could be much worse.

They too fashioned goalscoring opportunities aplenty, didn’t defend with much conviction when it mattered and still find themselves in a position to do significant damage on away soil.

With no away goal in UEFA competitions now, the match will go to extra-time if they lead by a one-goal margin after 90 minutes. Should it stay level on aggregate through that, penalties await.

This was their first competitive game of the 2022-23 campaign after all, whereas John Russell’s men have developed cohesion and consistency from a nearly full five-month fixture schedule.

Who will hold their nerve this time around?