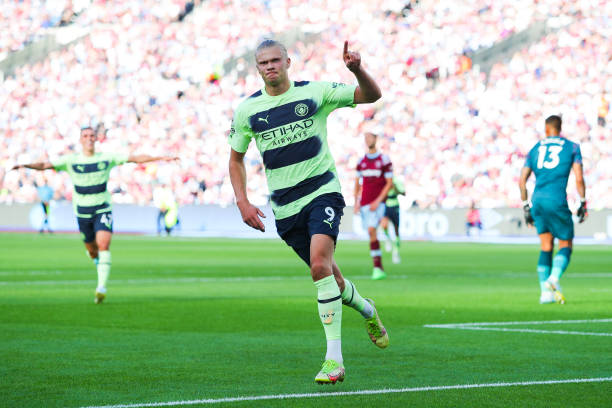 Erling Haaland became the second Manchester City player to score a brace on his Premier League debut, after now-retired legendary striker Sergio Aguero did so during a memorable substitute appearance against Swansea in 2011. The 22-year-old’s first foray in England’s top-tier was predictably devastating away at West Ham yesterday, but eyes will be on the encore. 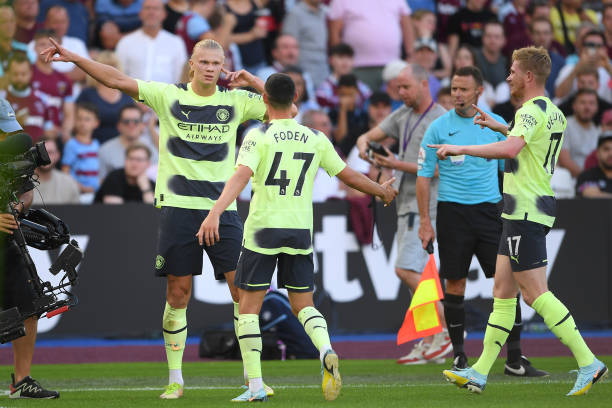 Potent trio: If they’re not careful, the rest of the league will soon get used to seeing this

On a weekend where their closest title rivals dropped points against newly-promoted opposition and their noisy neighbours were stunned by Graham Potter’s bullish Brighton side, Manchester City avoided a potential banana skin in east London themselves yesterday evening.

The last five H2H meetings before this one didn’t make for comfortable reading (W2, D2, L1) and even after being bamboozled by Jarrod Bowen in the first-half, last season’s title could’ve been wrapped up a week earlier had Riyad Mahrez converted an 86th-minute penalty. He didn’t.

No team won more games (29) or outscored (99) Pep Guardiola’s side in 2021-22, yet there has always been a defensive vulnerability about them that gave teams quiet confidence they could emerge with a result – Tottenham, Southampton and West Ham all good examples of that.

Rodri’s long been heralded as one of the world’s best defensive midfielders, yet doesn’t always have adequate protection alongside him, nor the big-game consistency, to justify that notion.

Yet it was Joao Cancelo’s careless crossfield pass in the City half gifting West Ham an early chance inside two minutes. Michail Antonio headed narrowly over the bar from Aaron Cresswell’s delivery, but the hosts ran out of steam in a first-half packed with defensive actions. 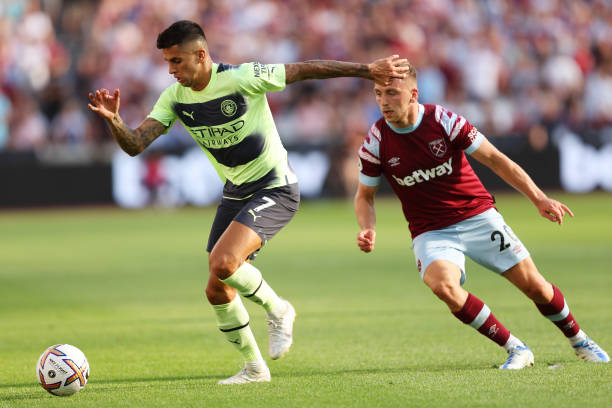 Haaland lurked dangerously in-and-around the area, giving Ben Johnson and Kurt Zouma a constant presence to concentrate their minds on, while Phil Foden’s cross for the 21-year-old after 20 minutes was mightily close to hitting its intended target and opening the scoring.

Haaland drops deep to receive possession as he spots Walker scanning for forward options… Cancelo does his best Mahrez impression – look how comfortable and far up the field he is in the following clip – feeding Foden, whose cross for the striker narrowly missed the Norwegian

After repeated clearances, the Citizens deviated from aerial balls and continued probing with precise passing to pull players out of position and create spaces.

Here… Grealish then de Bruyne floated promising crosses intended for Haaland but were repelled by an alert Ben Johnson. They opted to keep the ball on the floor and got their reward

de Bruyne had a goal disallowed after Gundogan strayed offside in the build-up, but this was precisely the sort of incisive play that gives opposition players cause for concern.

Alphonse Areola, on for an injured Lukasz Fabianski less than ten minutes earlier, gave away a spot-kick and City controlled their way to the finish line from there.

Immediately following a neatly-worked passing sequence, Ilkay Gundogan threaded through Haaland. His first touch baited the Frenchman into challenging for the loose ball, but he wasn’t able to catch it clean as the Olympic sprinter-style running had evaded his grasp in a flash. 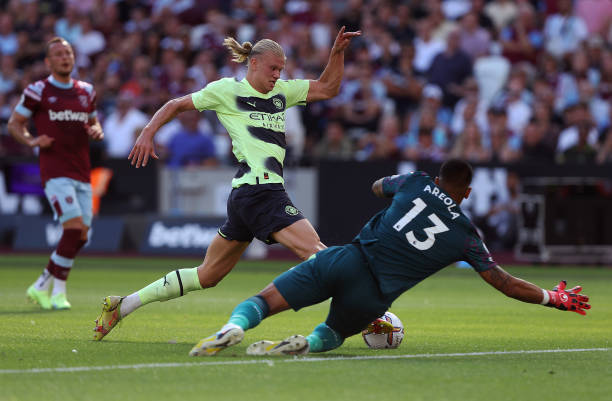 Don’t bite: Areola was convinced he could snatch the ball from Haaland’s grasp, and paid the price

Erling picked up the ball, sidefooted it into the bottom corner and 35 minutes in, City had their opener. Incidentally, Gundogan was the last player to score on his Manchester City debut (Bournemouth, 2016-17), but on another day, Haaland could’ve easily had four or five goals.

West Ham’s £30m signing Gianluca Scamacca looked threatening upon occasion after replacing a worse-for-wear Antonio near the hour mark, forcing Ederson into an acrobatic stop from his header – which would’ve been retrospectively disallowed via VAR through offside had he scored.

Besides that, the hosts were reduced to half-chances at best and the Brazilian international wasn’t busy as City soaked up pressure and hit them in transition to double their lead.

After a five-minute spell of West Ham fizzing balls into the box, Haaland again got on the scoresheet with precisely the sort of service many expected to see in last week’s Community Shield defeat by Liverpool: this time being set through by a defence-splitting de Bruyne pass.

The 22-year-old could’ve had two more goals within a ten-minute span – one before his second, before a close-range header he should’ve steered goalwards – over the crossbar it went.

He and Gundogan were replaced by Bernardo Silva and Julian Alvarez after 77 minutes, with a good evening’s work logged. As expected, his debut display has left everyone craving more.

In the Sky studios, footballer-turned-pundit Micah Richards couldn’t mask his post-match delight. It’s hard to begrudge him that excitement, as the two-time Premier League winner personally provided Aguero the pass for his first goal on English shores 11 years ago next week. 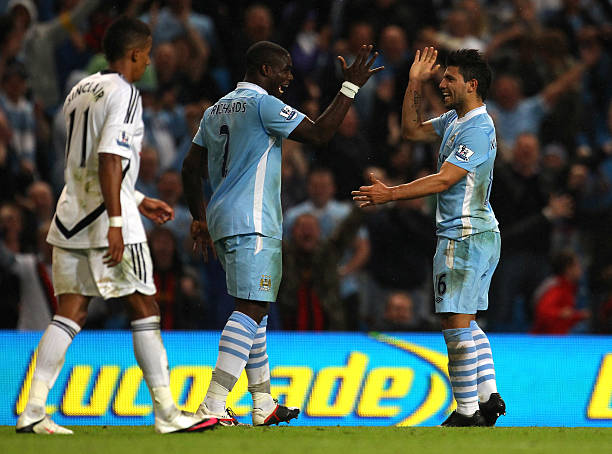 Pep Guardiola, as expected, was even-keeled when asked about the comparisons between his new star striker and Thierry Henry and Cristiano Ronaldo in Sky’s post-match interview:

“He has talent but one week ago when he missed that chance against Liverpool, he was a failure. People said he’s not going to adapt in the Premier League, everyone laughed at him.

Now he’s going to be the next Henry or Ronaldo. It takes time, it’s his first Premier League game – he’s 21 [turned 22 on July 21] – it’s a long career. So when he retires after hopefully staying many years at City, we will analyse what he has done. Be calm, we know the quality he has, what we have to do.

What he gives us is his qualities. We’re not going to change much, just adapt as now we have a threat there – an incredible runner and special finisher – he’s adapting perfectly to the way we play, we are going to find him more.”

While there will always be questions defensively, that last paragraph is a frightening prospect for opposition backlines to contend with, both in England and across Europe as a large portion of this City core are in their prime years and very determined to right the wrongs of seasons past.