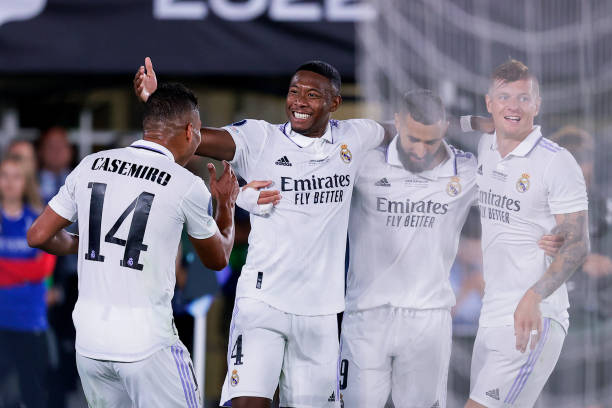 Goals from David Alaba and Karim Benzema in either half helped Champions League winners Real Madrid claim their first piece of silverware before their La Liga curtain-raiser on Sunday, beating Europa League champions Eintracht Frankfurt 2-0 in Helsinki to clinch this year’s UEFA Super Cup – now tied with Milan and rivals Barcelona for the most in competition history. 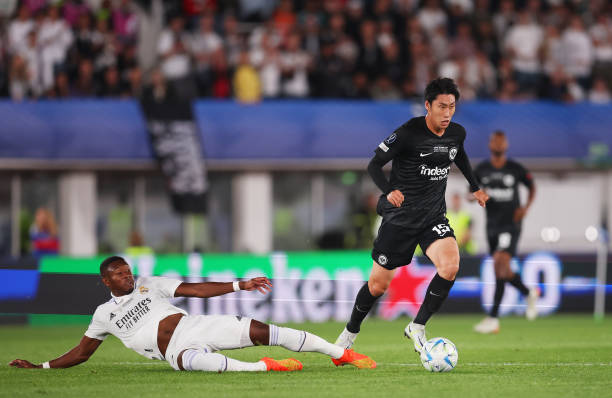 Fairly or not, the UEFA Super Cup has always been seen as a glamorous European friendly between two sides with a relative gulf in class – the Champions League holders against the same from the sister competition – and usually the stronger one prevails.

You have to go back to 2018, where Real were bested over 120 minutes by city rivals Atletico, for the last time the Europa League winners emerged victorious in this fixture. Diego Costa ran riot that evening in Estonia, while extra-time goals from Saul Niguez and Koke sealed their 4-2 win.

Frankfurt began proceedings in a similarly fearless vein here, and could’ve been a goal ahead had Thibaut Courtois – Real’s Man of the Match in the final against Liverpool – not denied the twinkle-toed Daichi Kamada from close-range after Rafael Santos Borre’s threaded through ball.

Moments beforehand, Jesper Lindstrom forced a strong stop by the Belgian but strayed offside in the build-up, creating an early warning sign for Los Blancos.

If they were tricked into thinking their mere presence would scare off lesser opposition, especially one who just conceded six against Bundesliga champions Bayern Munich on Saturday, the opening 15-minute spell showed they certainly were not going to cruise to victory.

Ansgar Knauff, on-loan from Borussia Dortmund, harrassed Ferland Mendy out of possession and created Kamada’s aforementioned chance. That was the first of many promising openings he either fashioned or folded on both sides of the pitch, making a team-high eight tackles. 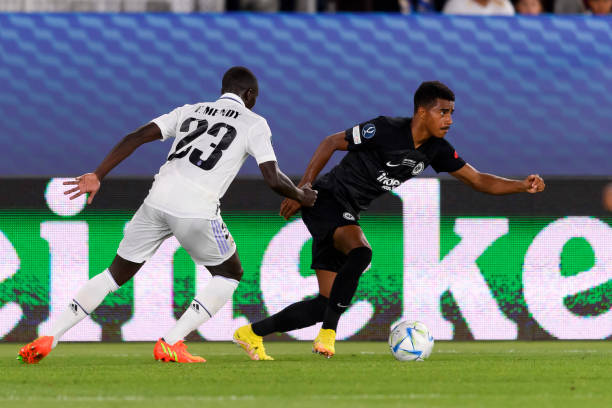 A minute later, Tuta made a key intervention on the goalline to keep the scores level as Vinicius Junior found himself denied what would’ve been a well-worked opener.

Madrid advanced in transition with intent, as Federico Valverde charged down the flank and scanned for options to aim at. His low ball found Benzema, who sharply slotted across for the Brazilian, watching as his effort beat Kevin Trapp but not his 23-year-old compatriot.

Buoyed by their encouraging start, Frankfurt manager Oliver Glasner must’ve been fuming on the touchline as he saw his side concede a preventable opener after 37 minutes.

Trapp tipped Vinicius Junior’s curling effort around the post, Toni Kroos whipped the resulting corner-kick into a dangerous area and moments later, the Frankfurt backline looked bemused, hoping an offside flag would bail them out of a forgettable sequence of aerial defending.

Benzema and Casemiro showed great reactions and awareness, winning battles they shouldn’t have theoretically had a chance to, leaving Alaba free to slot home a loose ball from close-range.

Four minutes later, it could’ve been two. Valverde fed Kroos, who showed great touch and composure by charging forward and teeing up Benzema. He took one touch to control, and lashed goalwards with his second on the half-volley – narrowly wide of the German’s far post. 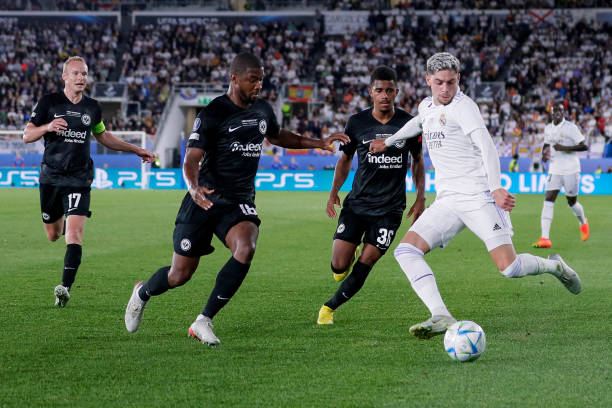 Despite resolute defending in parts by the Germans, there would be more close calls – including Casemiro hitting the crossbar – before the Ballon d’Or favourite finally got his goal for the evening after 65 minutes to double a lead that rarely looked in doubt after Alaba’s opener.

Vinicius beat the offside trap and latched onto Mendy’s ball, played a reverse pass into Benzema’s path just inside the box and the Frenchman’s first-time strike saw an unsighted Trapp flap at the effort as it flickered past him in a flash, blinded by Evan Ndicka on the way through.

Cruel perhaps, but ruthless – something they’ll need to be, if they’re going to be competitive in this season’s Champions League and build upon last season’s impressive European exploits.

Rodrygo replaced Luka Modric immediately afterwards, in the first of many changes – including £70m signing Aurelien Tchouameni’s competitive debut – as the match petered out and Real eventually got their hands on silverware once more ahead of their trip to Almeria on Sunday.

As for Frankfurt, they face Sandro Schwarz’s Hertha Berlin this Saturday afternoon with both sides searching for their first Bundesliga win of the campaign. They should take heart from a display like this, against a much stronger side, and learn lessons for the coming months ahead.