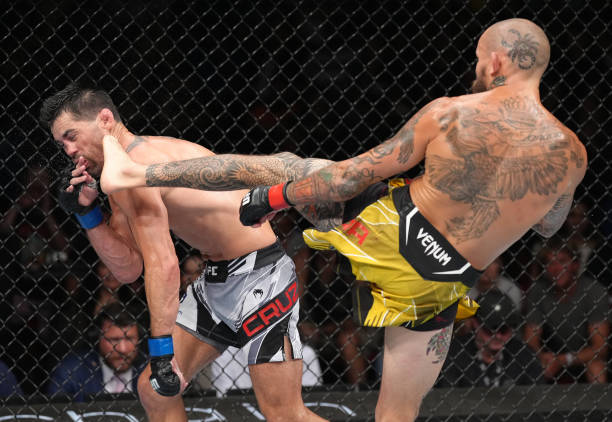 Marlon Vera (#5) started slowly but ended rather emphatically with a stoppage as promised – kicking Dominick Cruz’s two-time 135lb title aspirations to the curb in the championship rounds of their competitive headliner. The card overperformed expectations to send the 12,804-strong San Diego crowd home happy with big wins for Azamat Murzakanov, debutant Yazmin Jauregui and a Nate Landwehr vs. David Onama FOTY contender in the co-main event among others. 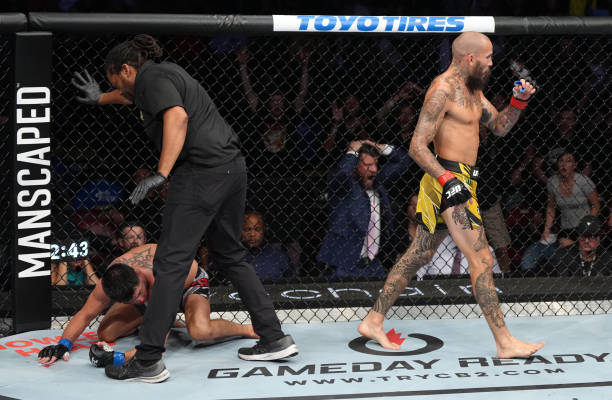 Chito walks away to celebrate his R4 KO win over Cruz, in a fight he was losing to that point

It was abrupt because, despite being dropped twice prior, both were flash knockdowns and Cruz immediately got up both times. He started aggressively, swarmed the Ecuadorian with heavy punch output early and often, stinging him with low kicks and a pair of R1 takedowns to boot.

Vera landed just 11 strikes in the first stanza, but a looping left hand crumbled Cruz momentarily and was a warning sign: for all of Dominick’s success, continuing to engage in close was perilous.

Cruz responded well and resumed blitzing punch combos, while peppering the legs with kicks early in R2. The gameplan was being executed well so far as Vera visibly struggled adjusting to his elusiveness and heavy feinting made it difficult to be busier in terms of overall output.

A heavy low leg kick opened up an opportunity for Cruz to complete another of his furious punch flurries, though Vera’s power proved problematic as the fight went long.

A double jab and right hand punch sequence briefly dropped Cruz for the second time, after a noticeably better round for Chito having displayed good takedown defence (stuffed five, three in R3) while importantly reducing the effectiveness of Cruz’s relentless striking volume too.

Then came a blistering finish, set up by a punch feint which saw Cruz shift to the right – where the 29-year-old’s high left kick landed flush against a future Hall of Famer who didn’t see it coming.

“It was hard to find the low kicks, coach told me throw a bomb after your punches and you will find him, props to Parillo, I love you,” Vera said in his post-fight speech Octagonside.

Despite doing well, this was a stark ending for Cruz and one reinforcing the belief he’s diminishing after falling short against Henry Cejudo in 2020. Unless he wants to be a gatekeeper with some fun three-round fights, there’s no shame in calling it a day at 37-years-old.

As I said during the week, it’ll be interesting to see what happens with other prospective matchups but the cream of the crop in the bantamweight division is heating up nicely again.

Rest of main card, featuring Landwehr-Onama and a big debut 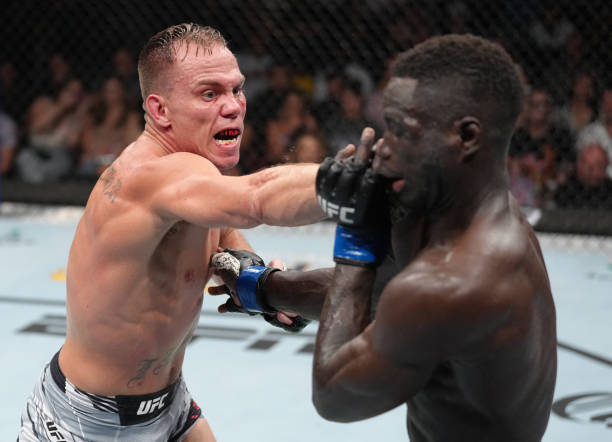 Landwehr and Onama combined for a rollercoaster co-main, leaving fans on the edge of their seats

In a featherweight co-main event that exceeded expectations, Nate Landwehr recovered from a slow first-round to wear on and eventually overwhelm David Onama – despite the hard-hitting Uganadan repeatedly stinging him even as his striking efficiency dwindled in an exhausting fight.

They threw just shy of 450 total strikes between them (162 significant strikes landed, 91-71 in Nate’s favour), Landwehr threatened choke submissions on multiple occasions – but the excess sweat caused by the California humidity on the evening helped Onama frequently slip out.

Landwehr could’ve finished it multiple times in R2, as evidenced by an assertive 10-8 scorecard by all three judges, but understandably got caught up in the moment and rather than land hammer blows to finish whenever David was on his back, he kept urging Onama back to his feet.

Fight of the Night honours – $50,000 each – for a back-and-forth battle that has quickly entered into consideration for Fight of the Year shortlist, it’s hard to argue against the notion, though how Onama managed to survive while severely exhausted after an excellent R1, I will never know. 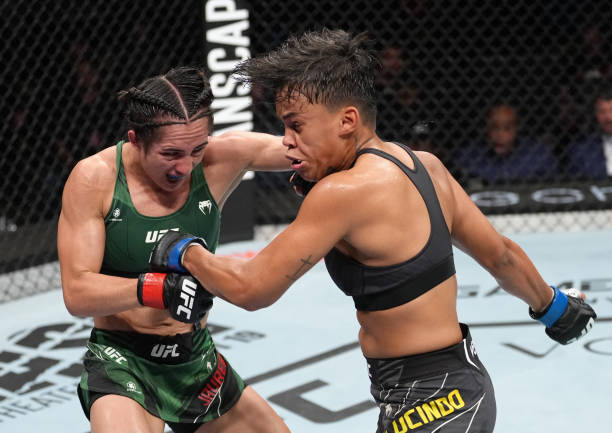 Lucindo (right) had the heavier hands, but Jauregui was busier with output in a fun debut for both

With reigning strawweight champion Carla Esparza pictured among the fighters in attendance, the 34-year-old would’ve been more interested than most seeing two youngsters in her division quickly win the crowd over with an entertaining tussle at 115lbs – on their UFC debuts no less.

Jauregui had the Brandon Moreno seal of approval from their many years’ time training together in Tijuana’s Entram Gym, with the interim flyweight champ tipping her to one day capture gold down the line. After a bullish display like this, it’s difficult not to agree with him.

She landed early and often against a heavy-handed Lucindo, who started promisingly but was unable to match the Mexican’s striking variety nor succeed with two takedown attempts in R2 as it became increasingly obvious despite their competitive exchanges, she was now second best.

Still only 20 herself, Lucindo should be encouraged by her display and will do well to review the film before making future adjustments. Meanwhile, Jauregui stressed in her post-fight interview she’ll go back to the gym and work on her defence after being hit a little too much for comfort. 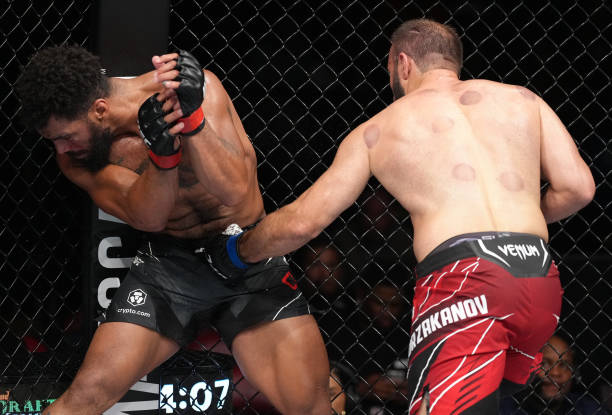 Russian light-heavyweight Azamat Murzakanov improved to 12-0 and sealed his second third-round finish of 2022, as the Contender Series graduate’s power proved too hot for Devin Clark to handle, repeatedly stinging him en route to a ground-and-pound finish against the fence.

Clark, who was in a main event matchup against Anthony Smith less than two years ago, has now lost three of his last four and the body language he expressed when hit hard by punches were discouraging for a light-heavyweight whose chin has been checked by multiple big men. 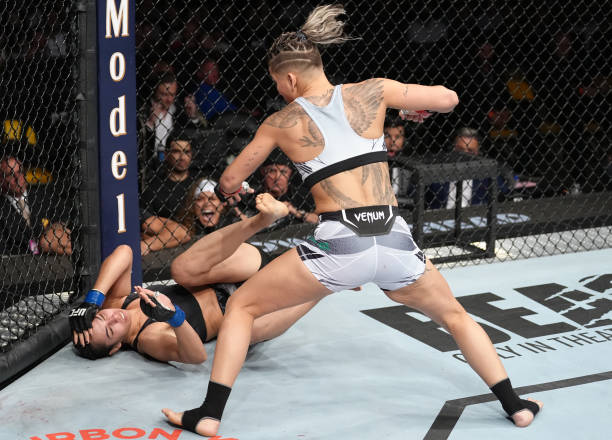 Cachoeira made quick work of Lipski, whose decision to exchange with her proved costly

Twice rescheduled and moved up a weight class from flyweight after Lipski missed the 126lb limit last week, Cachoeira added another name to a list of opponents she has finished inside a round (4 in her career, 2 in UFC). As such, it’ll be interesting to see how she’s matched up next. 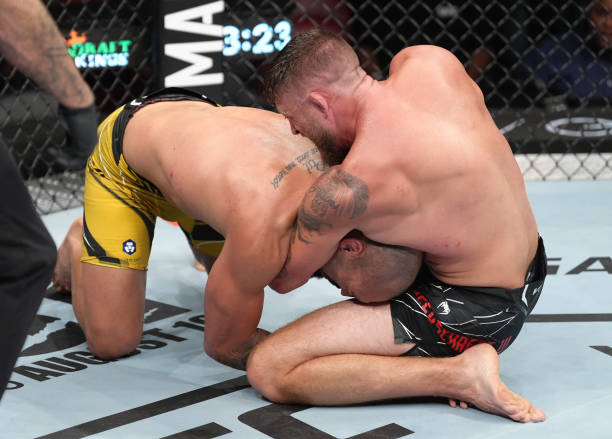 It wouldn’t be a Gerald Meerschaert fight without some form of adversity, but the 34-year-old relished the challenge against a tough test in Bruno Silva and came out with another submission win (27 of 35 victories) after a competitive first round that saw the Brazilian keep him honest.

His takedown proficiency proved decisive though, as he broke him down over time and scored a third-round knockdown to set up the guillotine choke finish GM3 was patiently searching for.