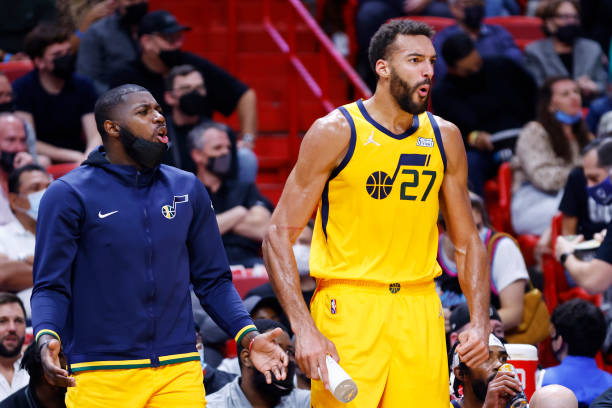 As the dust has settled since the blockbuster Rudy Gobert trade to Minnesota, the Timberwolves have added a familar face for the three-time Defensive Player of the Year to feature alongside next season as their offseason moves continue after a preventable R1 playoff exit in late April. 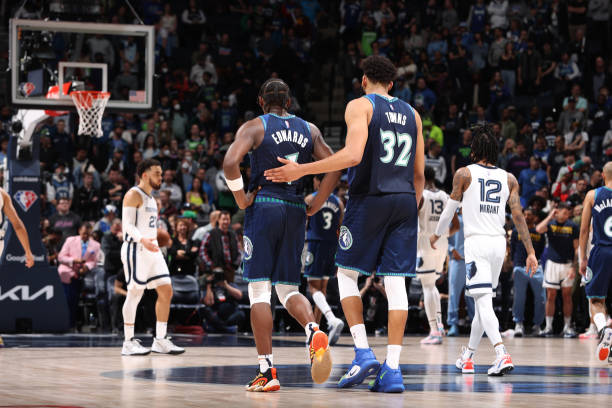 Edwards and Karl-Anthony Towns during their Game 6 defeat by the Memphis Grizzlies on Apr. 29

It was a fun, back-and-forth series which either side could’ve won.

In the end, Minnesota’s glaring weaknesses were laid bare for all to see as the Memphis Grizzlies pounced on the Timberwolves’ timid nature in crunch time snatching more than one game (3 and 5) they should’ve lost. Game 6, they were up seven with 9:00 remaining and lost by eight.

Questions came quickly and like daggers to the chest: could the front office rely on KAT to lead by example when things were at their toughest? Is this Anthony Edwards’ team? After all that play-in celebration, where was Patrick Beverley? Who was their Desmond Bane in this series?

Beverley, as it stands, will begin the season in Utah. KAT signed a new contract extension but it’s clearly a three-pronged attack now, D’Angelo Russell’s long-term future remains unclear and well, everyone would love to have a Bane in their rotation. Trading away Vanderbilt doesn’t help.

Jaden McDaniels could become that, but the jury’s still out as far as the 21-year-old power forward showcasing season-long consistency with his shooting splits.

For all the justified criticism about their porous defence, they’ve plugged a hole and lessened Towns’ off-the-ball load by going big for Gobert.

“It means the world they [Minnesota] believe in me, their masterplan, it’s a privilege and honour. I was in London working out, phone was off, when I walked back to the hotel room, my girl was like did you hear the news? Rudy, I didn’t know what she was talking about…

I thought we signed Rudy Gay… she said Gobert! I was excited, saw the vision of us both, twin towers out there – what he can do defensively, me offensively – the NBA hasn’t seen something like this, it’s gonna be unique and scary.

I’m versatile, I’ll play the 4 and 5 sometimes. Anderson with his size, we’re gonna be a really big team, especially with McDaniels too.

The sky is the limit for him, people question his jumper but he picked it up so much last year and just getting better, to his spots, expecting the double and triple-teams now, there’s no ceiling for him.”

It means they obviously hope for Anthony Edwards to take a superstar leap, ala Ja Morant in – you guessed it – Memphis. Judging by the way he finished his debut postseason, it’s difficult not to be excited: averaging 25.2 points (45.5% FG, 40.4% from 3PT) and three assists per game.

It’s unclear whether the Russell rumours are just that, given how much teams have to give up for assets now, but they have a solid ten-man rotation without factoring in free agent signings.

They’ve got a three-point specialist in Forbes, Rivers is a decent backup PG and Paschall will be determined to earn more minutes and prove his rookie season with Golden State wasn’t an anomaly (14 pts, 4.6 rebs, 2.1 ast in 27.6 MPG). Elsewhere, this is a helpful bonus to consider: 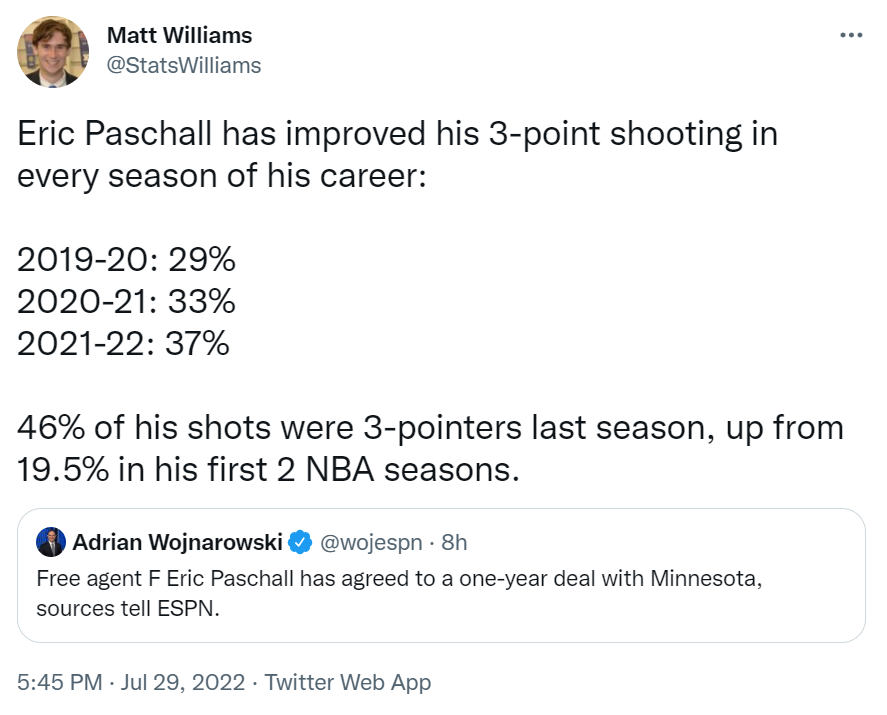 The biased Clippers view: View from an NBA expert 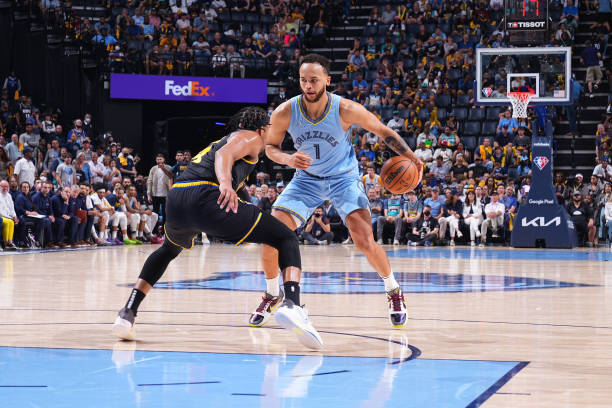 I had to ask Jack for his opinion with a few brief questions and naturally, he didn’t disappoint.

Mosope: What was your first reaction to the Gobert trade? What changed from the floundering franchise 18-24 months ago?

Jack: My first reaction? The fit is very strange.

Historically, due to the recent changes in how the game is played, two bigs in a lineup aren’t very efficient – especially when one (Gobert) has very limited shooting range.

Anthony Davis and Andre Drummond is a good comparison, one outside shooting big and one threat in the paint, which didn’t work too well.

Defensively they needed a boost with Pat Bev departing in that trade though. As for what changed, they embraced the idea of playing in Minnesota while the coaching improved. I just mentioned him, Pat Bev helped change the culture.

Anthony Edwards’ improvement helped but probably the biggest thing? They were healthier and just had more playing time together to improve chemistry.

MO: What about the KAT extension? The rest of their offseason business? Do you anticipate Edwards taking a Morant-esque leap this coming year?

JB: KAT’s deal is deserved and a good deal for both sides. Kyle Anderson is an underrated move, one of the unappreciated players I really rate – very good defensively, adds a much-needed aspect to them. If they could play good defensive on a consistent basis, they’d be really good.

Forbes and Rivers add experience and continuity, they struggled with basketball IQ and all three I’ve just mentioned are smart players! It’s now a good mixture between experience and the future of their franchise.

Eric Paschall is a wild card: good size, can create his own shot and I think he could be a very useful regular season piece maybe being a spark during a comeback.

If by Morant-esque jump you mean a second seed out West then no, but we’ll see more consistency and perhaps he takes that number one option firmly as their face of the franchise.

He’s still a little inconsistent, especially his jumper… if he can bring it every night they could be a serious team.

As always, a big thanks to Jack (@CFCJack2712) for his time with this piece! If you’ve got this far down, you’ll probably know I take pleasure in doing these types of features – offseason or not!

It’s not the first time Jack’s views have appeared and won’t be the last, as we’re likely to discuss some topics as the new campaign nears – even with his uncanny penchant for jinxing half the league. Make sure you stay tuned for more coverage from me across this sport and more besides.