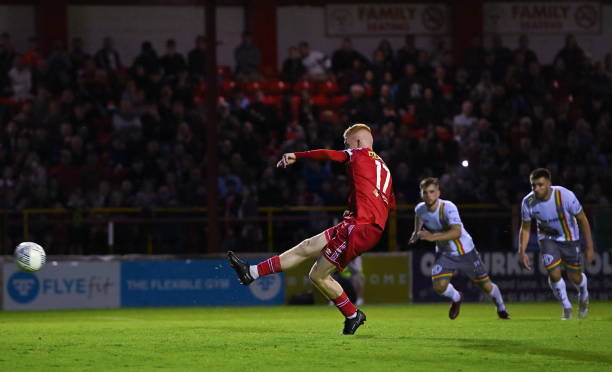 Shane Farrell’s second-half penalty ensured a share of the spoils from an ill-tempered Dublin Derby for Damien Duff’s side, as ten-man Shelbourne recovered to stifle Bohemians and earn a gritty point at Tolka Park. Tyreke Wilson’s early free-kick finish and two defensive injuries in the first 20 minutes suggested it’d be a long night ahead, but they rallied against the odds to draw. 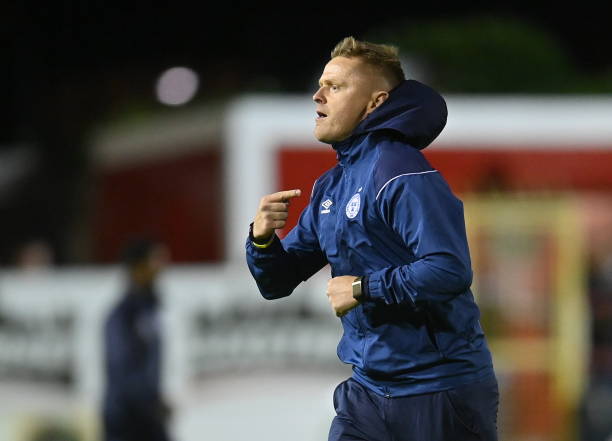 Hard night: Duff acknowledges the fans’ support as he jogs down the tunnel at the full-time whistle

“If you can’t get up for this, you might as well go home.”

Shels manager Damien Duff spoke beforehand about how his players had prepared well for this fixture and that motivation wouldn’t be a problem.

They were behind almost immediately, after Aaron O’Driscoll’s clumsy challenge on the edge of the box was duly punished by a dangerous defender in Tyreke Wilson, adept from set-pieces.

Gavin Molloy’s super recovery run and tackle protected O’Driscoll as the visitors looked to exploit him in transition, before disaster struck for the 23-year-old forcing him to be stretchered off.

Ethon Varian’s needless push into his back saw him clatter into his goalkeeper, and he was knocked unconscious as a result.

After a lengthy stoppage to ensure he was okay, Shels were forced into a double defensive change as both he and captain Luke Byrne came off injured.

In fairness to the hosts, they responded well to that setback and created multiple chances to equalise before the half-hour mark.

Ciaran Kelly’s last-ditch sliding intervention denied Shane Farell as he advanced into the area, looking to shoot. Someone who did let fly was Matty Smith: leaving one defender in his wake, cutting past another and watching his effort trickle narrowly wide.

A minute later, he forced Jon McCracken into an acrobatic stop from distance, before Farell fired wide from long-range himself after his lofted free-kick delivery went unrewarded.

Shels’ top goalscorer Sean Boyd (nine goals in 16 league starts) was given every chance to pass a late fitness test, but missed out with a groin injury. His absence was particularly obvious in those moments, where cooler heads and more composure would’ve seen them pull back level.

Things got more difficult still on the stroke of half-time, as John Ross Wilson was shown a straight red card after a high, reckless challenge through Declan McDaid. 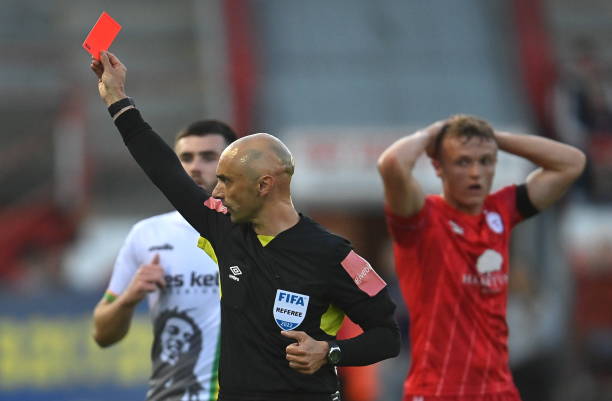 McDaid could’ve compounded their woes in first-half stoppage-time, but flashed a first-time effort wide of the post with the goal gaping after good work from Kris Twardek on the flank.

Ten minutes after the restart, they got an equaliser without warning.

Despite Kelly’s vehement protests, the referee didn’t hesitate to point to the spot after he hauled down an overlapping Jack Moylan in the box. Farrell fired home with an excellent spot-kick, a worthy scorer for a player who worked tirelessly both with and without possession.

McCracken was forced into another big stop, this time tipping sub JJ Lunney’s powerful effort over the crossbar, as you wouldn’t know Shels were the team battling a numerical disadvantage.

Farrell made a goal-saving interception late on, overextending himself to deny sub Jonathan Afolabi as he bore down on goal in the box. Between him and Shane Griffin’s defensive efforts, it was a dogged display by Duff’s men to emerge with a hard-fought point given the circumstances.

Bohemians were downbeat at full-time, but had more than enough time and chances to put the hosts to the sword. A draw keeps both in the Premier Division’s bottom half, though 5th-placed Sligo dropped points elsewhere this evening.