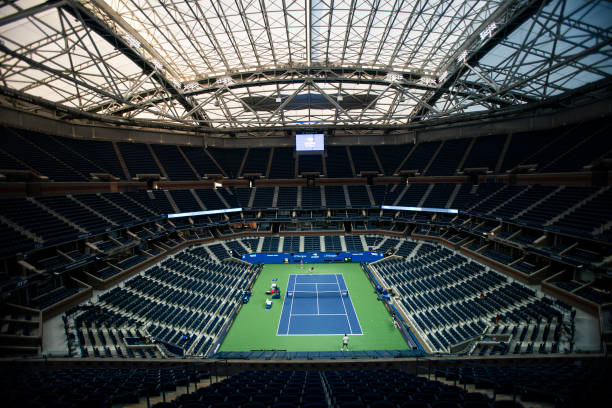 With this year’s final Major tennis tournament set to start on Monday in New York, here’s a round-up of news related to the big occasion that awaits at Flushing Meadows – from player withdrawals, injury scares, making marginal improvements and draw analysis on both tours. 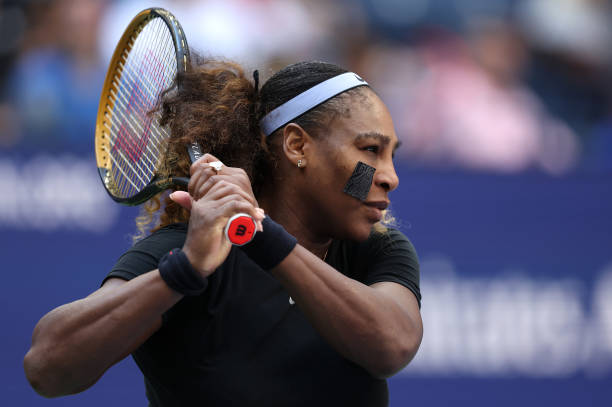 Serena Williams’ final farewell awaits this fortnight. Ahead of her final event on tour, capping an unforgettable 27-year pro career, two former world no. 1’s have publicly expressed their desire to see her depart with the massive celebration she deserves after an iconic run in the sport.

Three-time Major winner and double Olympic gold medallist Andy Murray, who himself fended off what looked to be a hip injury-enforced retirement three years ago, told the Guardian:

“She has hardly played in the last few years, expectations on her run should be very low. The celebrations of her career should be really, really high.

When I first found out, I was sad but at the same time, she will probably want this week to be about everything she has achieved, having a really nice send-off – more of a celebration than being really upset it’s the end.”

She’ll play world no. 85, Montenegro’s Danka Kovinic – who ousted Emma Raducanu in three sets at this year’s Australian Open – on Day 1’s evening session on her US Open return.

Roddick, who retired in 2012, echoed Murray’s sentiment about what’s to come and said she should enjoy what will undoubtedly be an emotional final few moments in tennis.

“Having done it on a much smaller scale, it was one of my favourite weeks of my career when I retired at the US Open. I’m a blip on the radar compared to this celebration Serena has ahead of her.

As a friend, I hope she takes in the innocent moments, interactions with people she won’t know the frequency with which she will see them.

I hope she pays attention to that part, takes a look around innocently at the stadium, it’s packed and people cheering for her, soak that in.

If it’s first or fourth round, it is largely irrelevant as long as we can properly celebrate her place in the game – tough to put in the proper superlatives.”

Serena will also partner older sister Venus for the first time since Roland Garros four years ago, after it was confirmed they were granted a wildcard into the WTA doubles competition. 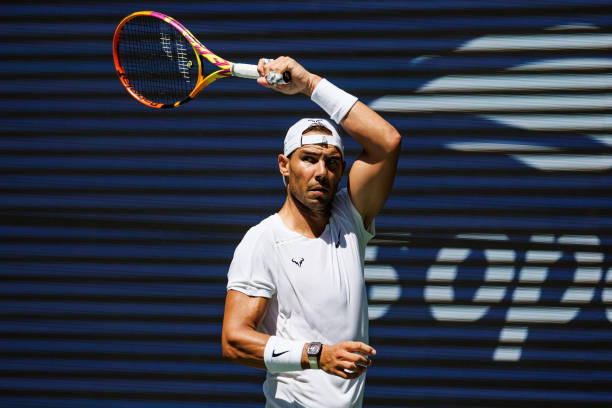 Although he has only played one match on the US swing, and withdrew from his Wimbledon semi-final against Nick Kyrgios with an ab injury, former ATP world no. 2-turned analyst Alex Corretja believes 22-time Grand Slam champion Rafael Nadal can find his best form in New York.

He lost to eventual Cincinnati titlist Borna Coric in three sets, opted against competing in the Winston-Salem tournament and has instead travelled to Flushing Meadows for multiple practice sessions with his team. In a Eurosport discussion, Corretja said this about his compatriot:

“I don’t think we should be concerned.

Of course, it would have been great for him to play maybe three matches before the US Open and that would have been enough. But he could get that at the beginning of the tournament, with some of the matches he’ll play.

Last week he lost to Coric, but it was okay; when you finish the tournament and the guy you lost to, won [the title] – you are so much more relaxed.

I think he will be pretty much comfortable thinking he’s not that far away from the top players. He’s going to be very dangerous, got the comfort of knowing he won the Australian Open from a similar position, which was unbelievable.”

Nadal, seeded second here, is one of five players in contention to be ranked world no. 1 – including last year’s champion Daniil Medvedev [1] and the Norwegian who grew up idolising him in Casper Ruud, who he beat to clinch a historic 14th Roland Garros title two months ago.

injury fears and bad session aside, Raducanu ready to roll 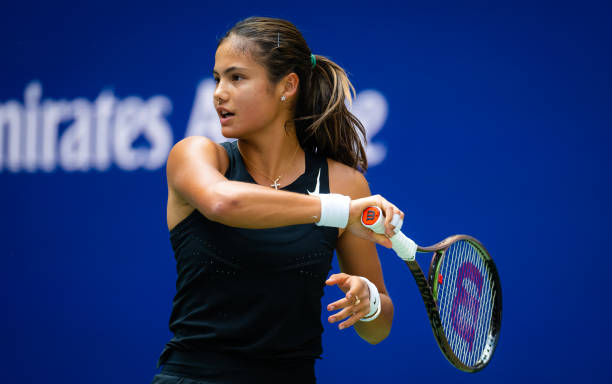 Kim Clijsters’ observation that defending US Open champion Emma Raducanu has matured as a tennis player since last year’s whirlwind triumph is echoed by critics aplenty, though her spotty record this season as well as a history of niggling injuries leaves a lot to be desired.

She sparked fears over her fitness once more, after pictures showed her in discomfort and reports later emerged she had to stop due to pain at one stage of a practice session on Friday.

Emma Raducanu due into the media room fairly soon but some cause for concern from her practice. She had her right wrist taped and twice stopped the session, once in tears. She did play on so hopefully nothing serious. pic.twitter.com/C3keoQgmny

The British teenager has been handed the uneviable task of kicking off her title defence against France’s giantkilling veteran Alize Cornet in Tuesday’s night session, undoubtedly keen to get off to a straightforward start back on the scene where her spotlight grew exponentially last year.

On the aforementioned title defence, and reflecting on the last twelve months, she said:

“I think defending a title is just something the press makes up. I’m just taking it one match at a time, every single player is very capable in this draw, I just focus on what I’m doing, my own trajectory.

As I said last year, going to do things my way. It’s really nice to be back in New York, great for me to come here having done a year on the tour, played most of the tournaments. I’m really happy with what I’ve done this year, how I’ve come out of certain situations. I’ve obviously got amazing memories.”

Can she make some new ones this fortnight? We’ll have to wait and see.

Ruud sad, but not crying about Djokovic’s withdrawal 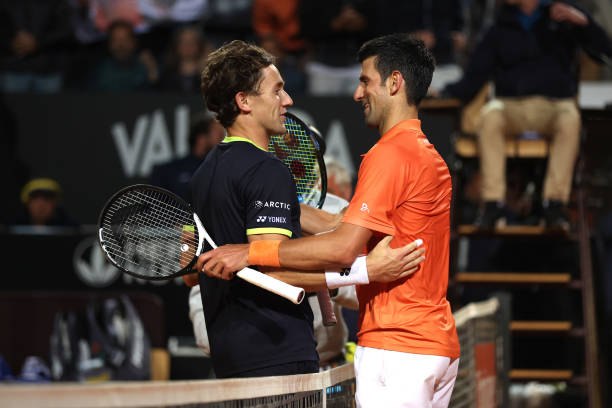 Pictured here during their Rome SF in May, the pair are friendly and practiced together previously

“It’s an individual sport so all the players with think about themselves firstly, I think it’s sad that politics – or these rules – will get in his way.

He’s chasing Rafa with one more ahead of him in the Grand Slam count, it could be in the country’s best interest, he’s won there many times before and brought great crowds to the stadium, is a big superstar.

Having him and Rafa in the final would be so epic – everyone knows what’s on the line. It’s very sad but I’m not crying about it, as a colleague I’m sad.

This is a special case because of politics, I don’t think you should mix politics and sport because it makes [for] a bad outcome. He won Wimbledon but didn’t win points for it.”

Having initially held out hope for a last-minute change in policy, the 35-year-old Serbian confirmed on social media Thursday that he withdrew.

In an Eurosport interview, fifth seed Ruud admitted all players feel the need to look out for themselves given tennis’ individualistic nature and won’t be too upset by the news, but feels it would’ve been in the US’ best interest to allow Djokovic to feature, an opinion shared by many.

Read his quotes above.

US Open draw analysis: the men’s side 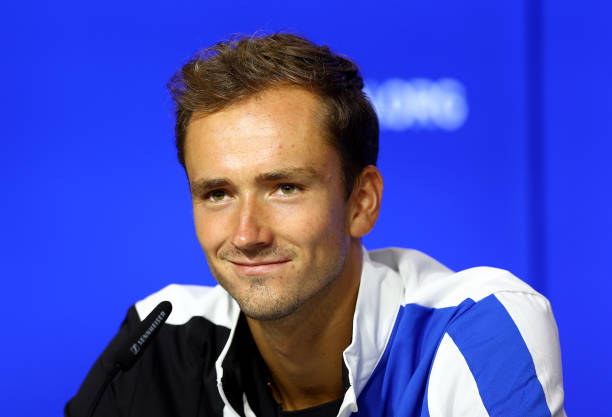 Medvedev finds himself in a section with Kyrgios, Bautista Agut and faces an American in R1

British no. 1 and Wimbledon semi-finalist Cameron Norrie [7] is projected to meet Rafael Nadal at the quarter-final stage, should both come through their respective tests as planned.

Andy Murray, the 2012 champion, has an easier first few rounds – on paper – but could meet last year’s Wimbledon finalist Matteo Berrettini in R3.

It’ll be interesting to see how he fares physically, after revealing this week he’d undergone sweat testing to try and understand why he’s continued to have worrying cramping problems of late.

In a rematch of their Queen’s matchup, Jack Draper faces Finland’s Emil Ruusuvuori, with Felix Auger-Aliassime – a semi-finalist at last year’s tournament – likely to await the victor in R2.

Dan Evans, the country’s no. 2 ranked player, faces an unpredictable prospect in the form of big-serving Jiri Vesely. Carlos Alcaraz, one of the favourites to go all the way, could meet him in R4.

Kyle Edmund, a former Australian Open semi-finalist, has the toughest first-round assignment of all his compatriots in the form of French Open runner-up Ruud.

He only just returned to competitive singles action this month, using his protected ranking to get into the main draw, while fellow Brits Liam Broady and Paul Jubb – who acquitted themselves well at SW19 – both suffered defeat in the qualifying competition earlier this week.

Medvedev’s section, a look at Alcaraz, Tsitsipas and Nadal

Defending champion Daniil Medvedev and Wimbledon finalist Nick Kyrgios are projected to meet in round four next month, after landing in the same section of the draw.

Kyrgios, who beat the Russian in Canada a fortnight ago, has a tricky path to navigate – including the opener against close friend and doubles partner Thanasi Kokkinakis.

Alcaraz has a difficult draw, with 2014 champion Marin Cilic [15], the aforementioned Evans [20] and Cilic’s in-form compatriot in Cincinnati winner Coric [25] all among his section.

The victor could face either Hubert Hurkacz [8] or Jannik Sinner [11] in the quarter-finals, though we know how quickly projections can go out the window.

Tsitsipas, seeded fourth, faces a qualifier in R1 but features in the same section as… Berrettini and Murray. Those potential matchups make for compelling tennis.

US Open draw analysis: The women’s side 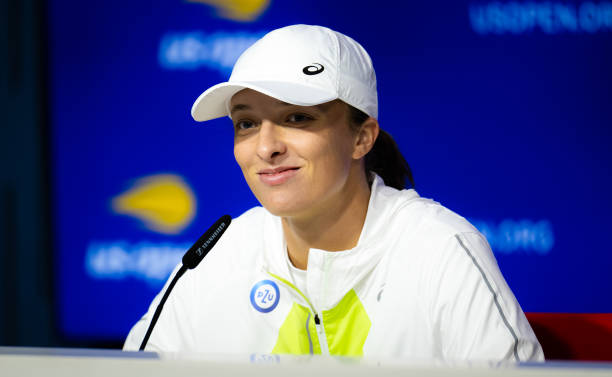 Tough task: Swiatek has Anisimova, Ostapenko and Stephens among others in her section

Raducanu has a mammoth task ahead of her if she’s to embark on a deep run this fortnight, with four-time Slam champion Naomi Osaka and Wimbledon titlist Elena Rybakina potential R3 opponents, should her title defence last that long after a maiden meeting with Cornet first up.

Aryna Sabalenka, seeded sixth, could await the victor in the Round-of-16, from a section featuring wildcard Venus Williams and another giantslayer in Kaia Kanepi.

Swiatek has three fellow Major winners in her section – Sloane Stephens, Jelena Ostapenko and Sofia Kenin – while the latter, an injury-plagued wildcard this time around, could’ve had a kinder draw: facing Wimbledon quarterfinalist Jule Niemeier.

Simona Halep and Coco Gauff headline section five, with Jill Teichmann and Madison Keys among those who’ll quietly fancy their chances of ruffling a few feathers.

Last year’s semi-finalist Maria Sakkari has a rough route to the title from her section alone: Beatriz Haddad-Maia, Cincinnati champion Caroline Garcia and 2019 US Open champion Bianca Andreescu all feature from a 16-player stage where only one can progress into the quarter-finals.

Harriet Dart faces Russia’s Daria Kasatkina in R1, from a section led by Wimbledon runner-up Ons Jabeur. Clearly though, A few surprises could be in store.