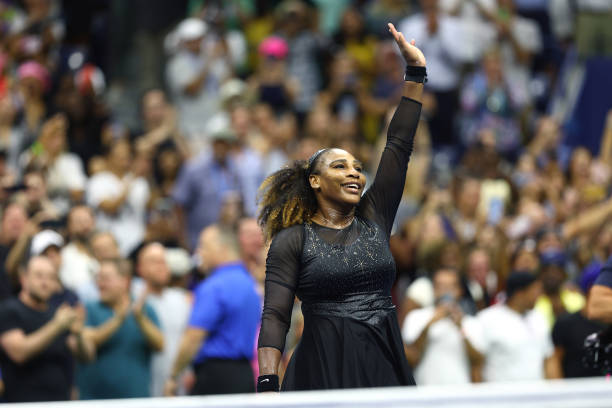 Serena Williams’ last US Open campaign got underway with a hard-fought 6-3, 6-3 win over Danka Kovinic, before a celebratory ceremony for the 23-time Major champion as her illustrious career enters its final days. Casper Ruud and defending titlist Daniil Medvedev eased through in the day session, while Simona Halep and Stefanos Tsitsipas were among the Day 1 casualties…

Headlines from an eventful opening day 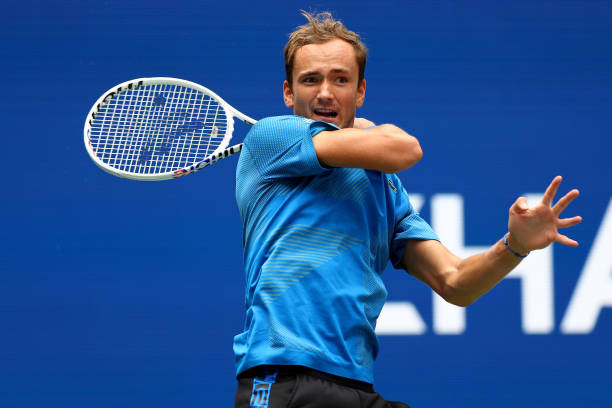 Medvedev was safely through, exacting revenge vs. Kozlov – who beat him heavily at under-14 level

Serena show surges into second round 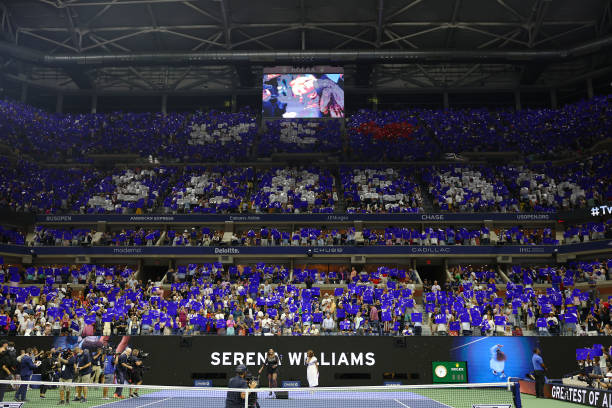 In terms of performance level, it wasn’t the best tennis but things intensified, the longer they went. Between them, 11 double-faults in the match’s first eight games.

Kovinic, who described it as a privilege and honour to play her when the draw was announced, initially didn’t seem awed by the occasion.

That all changed, when she had an opportunity to consolidate a break at 4-2 in set one. A requested review of Hawkeye Live showed Serena had reeled off a backhand winner on the line and from that point forward, the 23-time Major champion created separation and found her groove.

A horror service game gifted Williams a 5-3 lead and despite being made to work for it, with a few fantastic rallies being contested and one forceful return ace, she saved five break points with timely aces and improved first serving to eventually take a set advantage after 55 minutes.

Kovinic kicked off set two authoritatively, saving two break points. A quick hold down the other end of the court immediately placed scoreboard pressure back on the Montenegrin, and soon she would fold again as an electric crowd rose, helping to propel Williams into R2.

Grinding rallies helped Serena play her way into form, racing away to a triumphant victory in 100 minutes. Williams had five more winners (23-18), while Kovinic was forced into 28 errors.

The task ahead doesn’t get any easier as she’ll play second seed Anett Kontaveit next on Wednesday, after the Estonian dropped just three games against Romania’s Jacqueline Cristian.

“Feel so comfortable on this court, just want to do my best and that’s all I can do, the crowd was crazy! Really helped pull me through, I was really pumped.

It’s been such a hard decision because when you’re passionate about something, it’s hard to walk away and that’s been the case for me. I have a family, want to be a good mum to her [Olympia] there’s other chapters in life – my VC company, spending time on my spiritual life – but I’ll still be around!

Gonna be so fun playing doubles with her, haven’t done it for so long. Keep supporting me for as long as I’m here, love you all.” 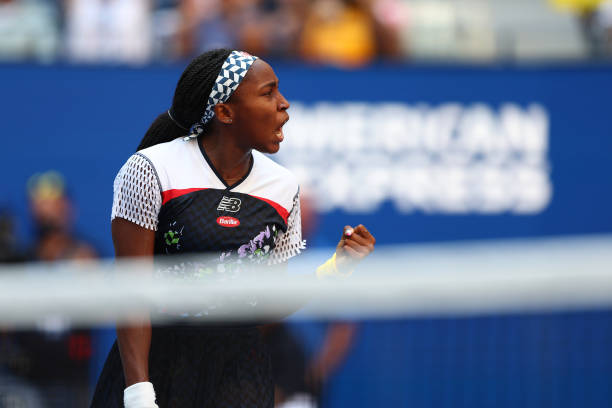 Gauff served brilliantly against Jeanjean, and will hope that continues throughout the tournament

French Open runner-up Coco Gauff said this week she’s previously leaned too much on her ability to chase down rally balls, wanting to show greater control and cutting edge in future.

While she was nervous as usual with opening round matches, the 18-year-old served brilliantly en route to a comfortable 6-3, 6-3 win over French qualifier Leolia Jeanjean.

Take it in, Daria Snigur!

Madison Keys, a runner-up at this tournament five years ago, came through 7-6, 6-3 against Snihur’s compatriot and former world no. 21 Dayana Yastremska.

She could face the 18-year-old in an intriguing all-American R3 clash, provided they win their respective R2 ties against Italy’s Camila Giorgi and Elena-Gabriela Ruse of Romania Wednesday.

2019 champion Bianca Andreescu and last year’s semi-finalist Maria Sakkari both had to withstand second set fightbacks, but eventually held firm to grit their way through tough opening round matches against two of Wimbledon’s surprise packages this summer.

Andreescu raced away to a bagel set against France’s Harmony Tan, lost the second 3-6, then refocused after a comfort break to dismantle the 26-year-old 6-1 in the finale.

As for Sakkari, she avenged her third-round defeat in south London by Tatjana Maria and would’ve gained confidence after being made to do so the hard way here (6-4, 3-6, 6-0).

Victories for the underdogs 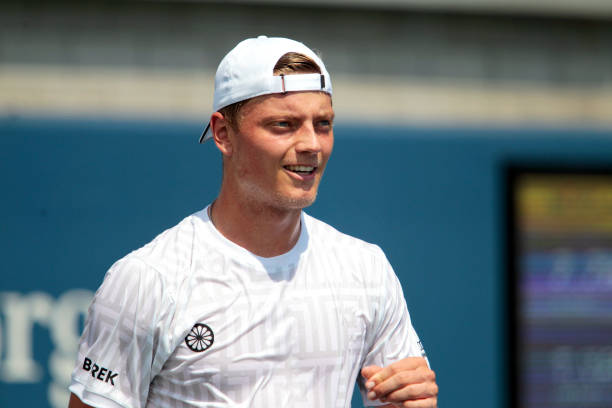 Making her first competitive appearance since losing to Jabeur at Eastbourne 2019 – you read that right – Russia’s 33-year-old Evgeniya Rodina scored her first victory with aplomb, recovering from an early break down to swarm beyond Italian 27th seed Martina Trevisan 7-5, 6-1.

While the Serena show unfolded on Arthur Ashe, 24-year-old American qualifier Brandon Holt, with mum – former world no. 1 and two-time US Open champion Tracy Austin – watching on, quietly made a comeback against his compatriot and Indian Wells champion Taylor Fritz.

Despite losing the first set and exchanging breaks of serve early in the second, Holt held firm and saved three set points at 5-6 down to take it to a tiebreak. There, he won it 7-1 and the wheels were firmly in motion as he utilised that momentum to seize upon an out-of-sorts Fritz showing.

Chinese 22-year-old Wu Yibing, who won the junior slam title here in 2017, came through an unenviable qualifying path (Ricardas Berankis, Stefano Travaglia and Corentin Moutet) and has become the first male Chinese player to win a US Open match in the Open era.

He blitzed beyond Georgian 31st seed Nikoloz Basilashvili in just over 90 minutes – recording nine aces, 31 winners (Basilashvili had that many UEs) and crucially just 15 unforced errors.

His compatriot, 25-year-old Zhang Zhizhen, will have trouble sleeping tonight. Buoyed by a partisan crowd in his favour on one of the outside courts, he began brilliantly and raced into a two-set lead over another Wimbledon standout in Hertogenbosch champion Tim Van Rijthoven.

He had seven match points in set three – three at 6-5 and four more in the ensuing tiebreak – but the Dutchman held on to force a forth. An early break helped him cruise ahead and well, the Dutchman’s defiance proved decisive: winning 3-6, 6-7, 7-6, 6-1, 6-4 in just under four hours.

Up next in midweek they face two names already mentioned in this section: Fritz’s conqueror Holt and lucky loser Moutet, who led 6-4, 7-6 before Stan Wawrinka retired with an injury.

Brit watch as murray, dart and draper all through 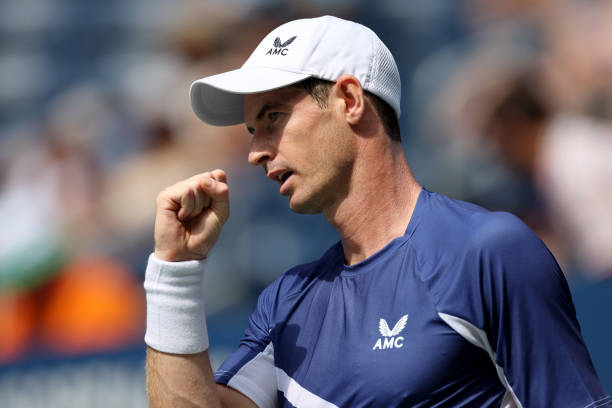 Murray was thoroughly tested by Cerundolo, who started well but faded as the match wore on

After losing a five-set thriller to Tsitsipas in R1 this time twelve months ago, Murray’s improved form and subsequent ranking bump would’ve helped him get a more favourable draw this time.

Still facing a seed in Argentina’s Francisco Cerundolo [24] – Bastad champion – it was imperative the 35-year-old won set one while keeping the 24-year-old honest during their rally exchanges.

It wasn’t without difficulty, but buoyed by a 4-1 first set lead, he eventually wore on the younger man with persistent shot-making and solid rally defence as Cerundolo got increasingly agitated at how he kept managing to fumble promising points with unforced errors (50, to Murray’s 32).

You can’t afford to do that against Murray, even at 35 and with his injury concerns, as he’ll punish you. Into R2 with a straight-sets win for the first time since 2016, he plays home hopeful and wildcard Emilio Nava next, who emerged in five sets vs. Australia’s John Millman elsewhere. 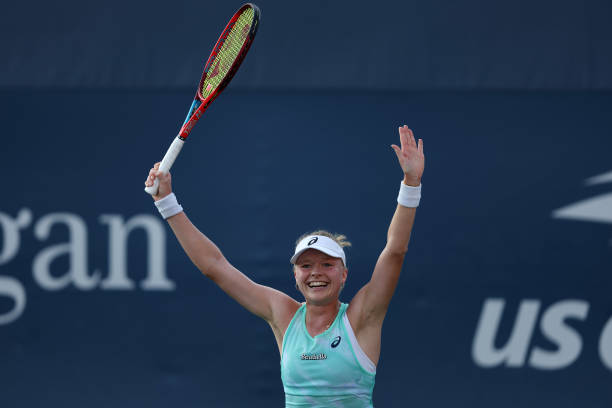 British no. 2 Harriet Dart scored the biggest win of her career to date, knocking off San Jose champion and 10th seed Daria Kasatkina 7-6, 1-6, 6-3 despite looking wearily resigned to another valiant defeat early in the deciding set.

She chuntered to herself after losing a rally, lamenting a perceived lack of fitness, appeared to be visibly struggling with a hamstring issue and had limited movement for a time. However, Dart defiantly channelled that negative energy into a resilient showing to overwhelm the Russian.

She did well to hold serve following that brief outburst, no doubt helped by a sympathetic crowd on one of the outside courts concerned this back-and-forth battle would be over rather quickly.

Keeping Kasatkina guessing with her shot selection, Harriet ultimately displayed a relentlessness that belied the 26-year-old’s world no. 88 ranking against a slow-starter punished for what commentators hinted might’ve been a sense of overconfidence given her slow service speeds.

Up next? Hungary’s 24-year-old Dalma Galfi – a Junior US Open champion in 2015 – who prevailed in much cleaner fashion by comparison against Spain’s Nuria Parrizas Diaz 6-4, 6-3.

All things considered, Kyle Edmund acquitted himself well during a 6-3, 7-5, 6-2 defeat by fifth seed and French Open runner-up Casper Ruud in the afternoon humidity.

No-one would’ve expected him to prevail, not least in his first best-of-five matchup since early 2020, but he kept things competitive against a top-10 player and this showing should provide him with confidence as his gradual comeback from troublesome knee injury continues.

Jack Draper avenged his Queen’s defeat by Finland’s Emil Ruusuvuori, needing little over two hours to secure passage into R2 with 10 aces, 20 winners and half the 23-year-old’s unforced error count (36-18), all while saving three first set break points to set the tone for a welcome win.

Featured matches to watch on Day 2 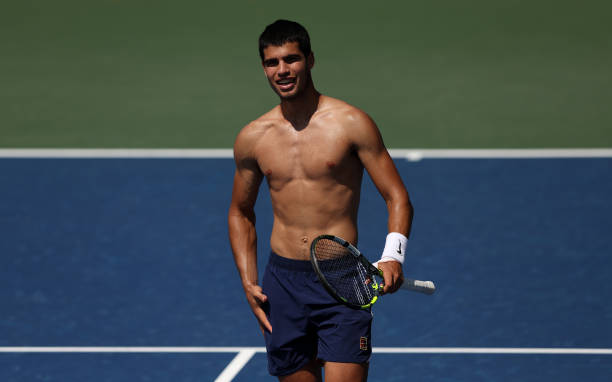 Alcaraz, one of the pre-tournament favourites, gets underway against Baez on Tuesday