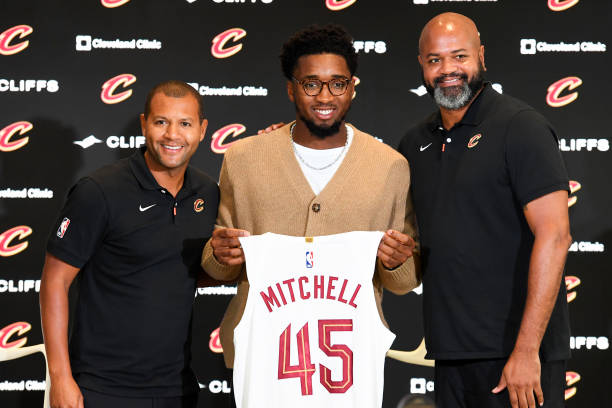 Three-time All-Star guard Donovan Mitchell was honest in his introductory press conference as a Cleveland Cavalier, on the allure of being closer to family at home as a possible New York Knicks trade loomed large over the summer. Instead he’ll play for one of their cross-conference rivals out East and talked up what the future holds for them as part of an excellent young core. 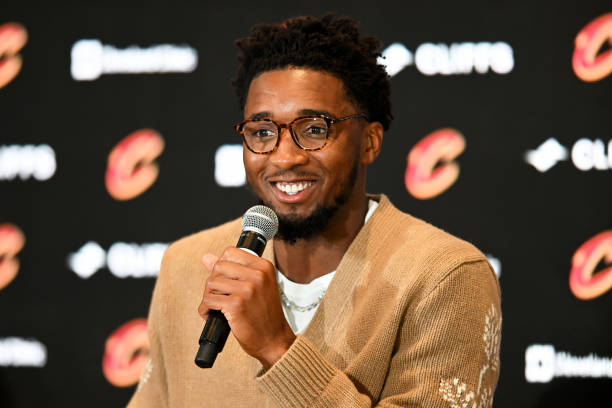 All smiles: Mitchell answers reporters’ questions in his introductory press conference on Wednesday

The obvious headline, and one already incurring the wrath of many in the last few hours, is to highlight the Cavaliers’ dwindling timeline as far as Mitchell’s long-term future is concerned. He didn’t shy away when questioned, so obviously he probably still wants to be in New York, right?

While The Athletic’s Cleveland-based senior NBA writer Joe Vardon threw the equivalent of a ticking time bomb most weren’t expecting to read upon the highly-regarded guard’s unveiling, there’s cause for long-term optimism – not just from Mitchell’s encouraging words midweek.

Honestly, as a Jazz fan, I already feel bad that Cleveland fans have to speculate about Mitchell leaving for New York, having spent 5 years doing that myself. I will say he is an incredible offensive talent as well as a stalwart role model/member of the community, Cleveland will enjoy whatever time they have with him.

I love watching this man play basketball, he is dynamic and creative. I would have loved seeing him if he’d come to my team. I’ll look for these guys on League Pass. I do see the concern with his defense, hopefully he turns that up a notch. But he is an A list talent, and a warm and engaging personality from all I’ve read.

Mitchell was golfing with friends in Miami Beach a fortnight ago when his agent, Austin Brown, called to tell him he was being traded to Cleveland.

Upon learning his new team didn’t have to trade All-Star duo Darius Garland and Jarrett Allen, nor Rookie of the Year runner-up Evan Mobley, he was said to be running around on the course like “wow, we have a really talented group.”

Ask any Utah Jazz fan and they’ll tell you the same, about the big-market bias and how their best players always seem primed for a big trade or offseason move elsewhere, especially if their existing team have underperformed expectations more than one or two consecutive seasons.

The Cavs took a calculated gamble on a rising star, 26 last week, and while the league’s storylines often centre around the latest disgruntled star who wants out, there’s also something to be said about continuity and building upon core young players with exponential growth.

“It’s not about market size for me. Honestly, it’s about winning basketball. All the other off-the-court stuff will take care of itself when you win games, no matter where you are.”

Cavs president Koby Altman described Mitchell as one of the best basketball players in the world, and the three-time All-Star’s presence alone will shake up the East in ways we’ll only find out deep into the upcoming regular season and beyond.

Armed with 39 playoff games and experience on a championship-contending team, the belief is he’ll help this Cavaliers side progress much quicker. Without LeBron James, Cleveland’s closest route to the postseason since 1998 has been the play-in tournament – not for much longer.

An excerpt from Vardon’s piece

Clevelanders learned the hard way not to take it too seriously when a star athlete talks about wanting to be a Cavalier long term. LeBron James didn’t just say he wanted to finish his career here, numerous times, but Nike drafted an entire marketing campaign on the idea of him returning home to rule, for good. So anything Mitchell says that’s warm and fuzzy about Cleveland, now, won’t necessarily hold come the summer of 2025, when he can be a free agent.

Can Spida be the Cavs’ missing jigsaw piece? 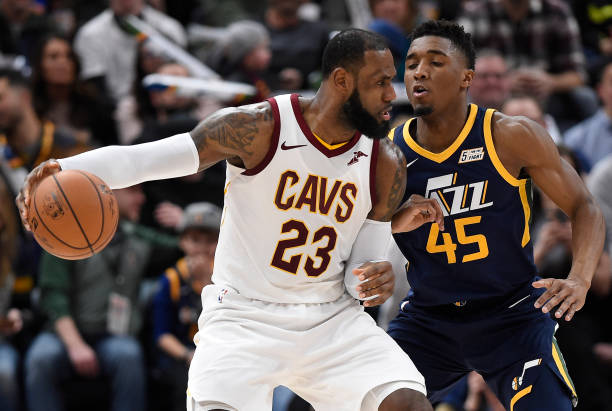 Mitchell was a huge Cavs fan growing up because of Lakers star forward LeBron, and reflected on how life has come full circle for him – just six years after celebrating one particular achievement.

“I remember seeing the reaction when he came back (to the Cavs, from the Miami Heat) and whatnot.

Going up and winning that championship (in 2016), that was a special moment. I was in Louisville in my dorm room screaming, making fun of my friends who bet against them.”

Assuming everyone remains relatively injury-free, will he be the missing jigsaw piece and help power the Cavaliers to the playoffs before subsequently making them a title contender?

Considering his five-year Utah stint where they overachieved expectations before falling short when it mattered most – in three different seasons – it won’t be any easier in a new, equally competitive conference but there’s no reason why they can’t start believing going forward.