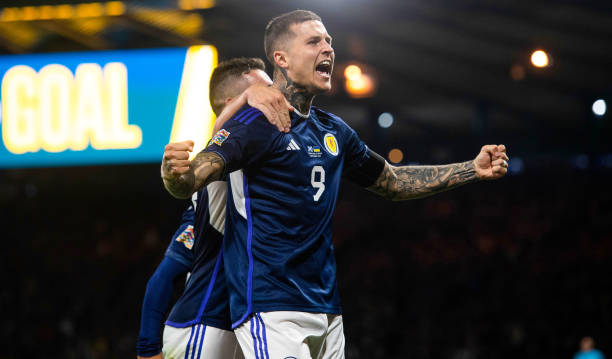 After a 3-0 midweek win over Ukraine, Scotland sit atop Nations League Group B1 and host the Republic of Ireland at Hampden Park in tomorrow’s 7.45pm kick-off, aware they can’t rest on their laurels. Can they build on that victory by avenging another summer defeat here, or will Ireland get their own international break off to a winning start against familiar opposition?

Can Scots use Ukraine win as momentum boost for more revenge? 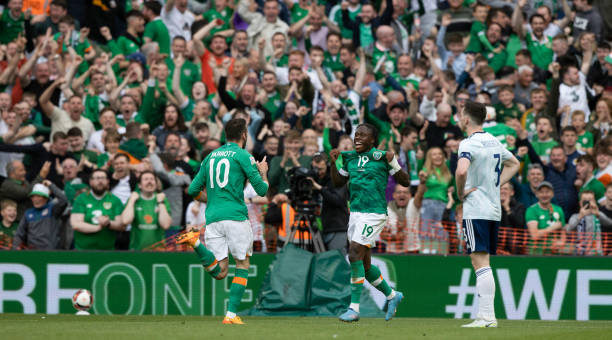 Parrott and Obafemi celebrate after combining for the latter’s goal to make it 3-0 vs. Scotland in June

Scotland vs Republic of Ireland
UEFA Nations League Group B1 — Kick-off at 7.45pm, Saturday
Follow the live action as it unfolds with my coverage here

The Tartan Army avenged their 3-1 World Cup qualification defeat by Ukraine over the summer with a second-half barrage on Wednesday, as goals from John McGinn and a seven-minute Lyndon Dykes brace off the bench saw them eventually overwhelm Oleksandr Petrakov’s side.

They’ll want to exact more of the same clinical vengeance against Ireland, who were 3-0 winners over them in Nations League action ten days after their 2022 World Cup aspirations were dashed.

Young forwards Troy Parrott and Michael Obafemi assisted one another, after Alan Browne netted a rare international goal to break the deadlock that day in Dublin. 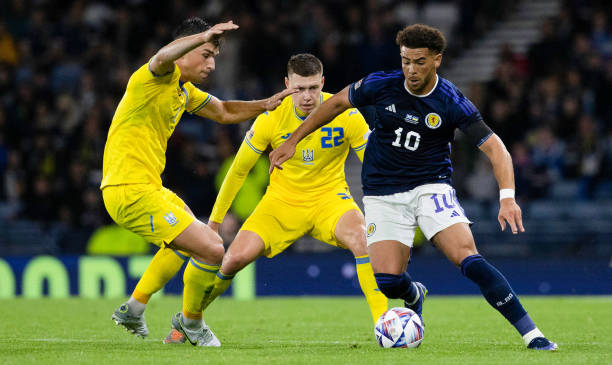 Adams feels their display vs. Ukraine sets them up nicely for this weekend’s latest UNL fixture

Southampton forward Che Adams has spoken about how the Scots “owe them one,” aiming to prove that was merely a one-off defeat.

Now they’ve earned a motivating result to start this international break, it’s likely they continue in that vein especially with home support on their side here. He said:

“We will be full of confidence now and looking forward to it. We all know what we are capable of doing – shown that to everyone – especially Ireland.

Played so well [against Ukraine], it’s just about building momentum, showed so much belief.”

Adams, who has four goals in seven appearances for the Saints this term, hit the woodwork and also forced two saves from Anatolii Trubin before being replaced late on.

QPR target man Dykes, his agemate, ended up sealing victory in his place while Ireland and Armenia both had midweek off.

That could help or hinder tonight’s visitors, though Scotland head coach Steve Clarke will be without two players in Celtic midfielder David Turnbull (ankle) and Everton defender Nathan Patterson (knee), the latter being stretchered off after a collision midweek.

Brentford’s Aaron Hickey should deputise as he did Wednesday, while Dykes’ impact might give him the nod to start ahead of Adams.

Billy Gilmour and Ryan Jack are among the options who didn’t feature last time out, while Newcastle winger Ryan Fraser could start after an impactful cameo too.

Despite their ability, Obafemi and Parrott have struggled for consistency in Championship fixtures so far this term – it’s entirely reasonable to suggest Birmingham City’s Scott Hogan will start alongside one of the attacking duo, with the other dropping into an option off the bench. 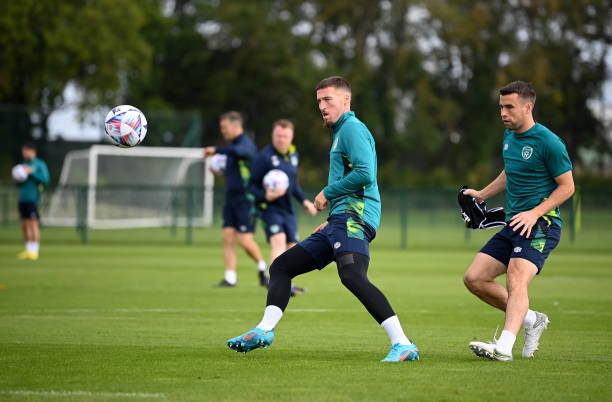 Besides them and whether Tottenham right-back Matt Doherty returns to the fold despite limited minutes under Antonio Conte lately, the rest of Ireland’s core team picks itself.

Having started Group 1 with successive 1-0 defeats, nothing but victory will do for Ireland here as they look to maintain their slender hopes of League A promotion in the Nations League.

Whether that is still the case at 10pm tomorrow night, remains to be seen.