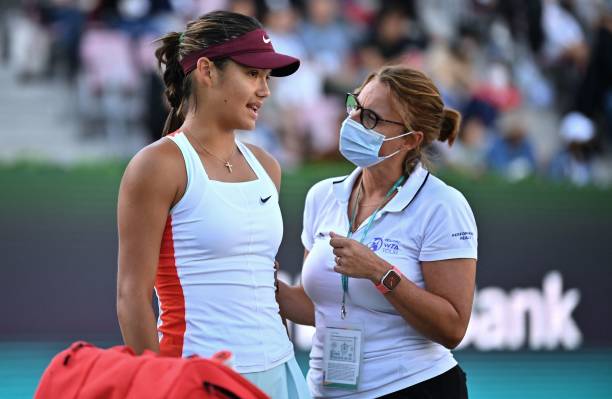 As Jelena Ostapenko prepares to play her third WTA singles final of the season against Russia’s Ekaterina Alexandrova in South Korea this morning (start time from 7am BST), there will be an overwhelming sense of what could’ve been for another Grand Slam champion whose injury struggles cruelly returned at precisely the worst moment in Saturday’s semi-final encounter. 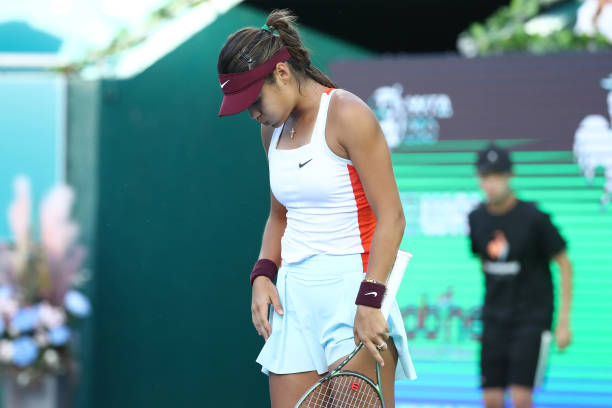 Raducanu started well, but faded physically once more as Ostapenko is into today’s final

It’s a cliched statement but sometimes the story writes itself, and this opening I had written yesterday morning in anticipation of a landmark result proved simply too good not to share.

The dust had barely settled hours after Roger Federer’s emotional ending to his illustrious career, playing doubles with long-time rival Rafael Nadal and finding themselves engrossed in pulsating Laver Cup action that spilled past midnight local time from The 02 Arena in London.

British no. 2 Dan Evans had won two matches in less than 24 hours to punch his ticket into the San Diego semi-finals, while Raducanu’s contemporaries Jodie Burrage, Katie Boulter and Heather Watson were all in Estonia attempting to qualify for Tallinn tournament early next week.

All three of them have spoken about being inspired by the teenager’s whirlwind success over the past year, in different ways, and playing without pressure at the crack of dawn – at least on European time – seemed to suit Emma having quietly gone about her business so far this week.

Wins over Moyuka Uchijima, Yanina Wickmayer and Chennai runner-up Magda Linette set her up perfectly for a maiden battle against a fellow Slam titlist – one who similarly divides opinion.

She recovered from an early break down – 2-0 in set one – to take the opening set against Jelena Ostapenko and rather than writing this piece, I would now be drafting up pre-match notes before covering her opportunity to clinch a second WTA singles title – even if this one is at 250 level.

Raducanu was at one point just four games – 16 points – away from securing victory before things took a drastic turn and after a medical timeout off-court, more treatment on it as well as a significant peformance drop-off, she eventually retired down 6-4, 3-6, 0-3 in the deciding set. 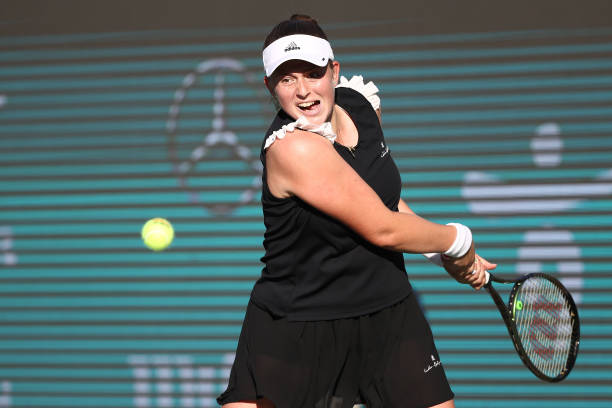 Ostapenko’s serving let her down, but consistently powerful groundstrokes kept her firing

After a shaky start by both with inconsistent serving, it quickly became clear Ostapenko was in a mood. Not the sort of stroppy, demonstrative one that easily incurs wrath and ridicule from those on social media, but an inspired one – to crush the ball and blitz Raducanu off the court.

Naturally, as is the case with those who adopt such tactics, it’s high-risk and high-reward.

You’ll get a mix of winners and erratic errors, which the 25-year-old Latvian experienced, wooing the crowd with some line-kissing winners while also drawing gasps after some makeable missing and multiple double-faults during big moments in the match.

Raducanu, for all her shot defence and court coverage, frequently found herself backed behind the baseline and fighting precarious situations – like a 0-30 deficit to hold at 4-4 in set one, or having to mentally reset after watching Ostapenko save two set points with consecutive winners.

She did precisely that, producing an unreturnable serve and timely second serve to clinch the opener after 53 minutes.

A graphic shortly afterwards showed there was very little between them – 42-38 in points won – which said it all. Ostapenko’s serving stayed shaky and Raducanu took advantage of weak second serves by producing a two-handed backhand winner up the line to lead 2-1 in set two.

The break evaporated quickly though, another line-kissing winner restoring parity at 2-2. Then, the wheels started to turn furiously and it became clear Raducanu was struggling physically.

The lower back, and her left gluteal muscle were the cause according to the commentator, as her movement was limited and she kept applying attention to those areas between points. Down 3-2 and about to serve to level it once more, then came the medical assessment and timeout.

She tried to soldier on afterwards, but won just ten points over the next seven games before retiring with the match swiftly turned on its head.

Raducanu was pictured with some heavy strapping to her left thigh area while practicing on Tuesday, and the 19-year-old’s injury tendencies have been well-documented. That won’t make this defeat less painful – no pun intended – after an encouraging week’s worth of tennis in Asia.

Given she had already entered into multiple WTA events between now and November, it’ll be interesting to see whether withdrawing is the right decision for her after this latest setback.