Conor Gallagher’s start to the Premier League season has been a forgettable one for the Chelsea midfielder, yet the 22-year-old talent – already capped by England’s senior side – certainly picked the right moment to produce his best performance of 2022 thus far in Sheffield overnight against Germany under-21s ahead of a big month under new boss Graham Potter.

Gallagher must build on Germany showing

Gallagher against Germany: deployed on the right-hand side of a 4-3-3 formation
Three tackles, two clearances, one interception, 93.5% pass accuracy, one goal in 69 minutes

With the exception of former Fulham wonderkid Ryan Sessegnon, Conor Gallagher sticks out like a sore thumb in England’s under-21 setup at present. He’ll be quietly hoping it’s not for long.

After Morgan Gibbs-White stayed put at Nottingham Forest with an unspecified injury knock, only Norwich fullback Max Aarons is older than him in Lee Carsley’s squad. Meanwhile, he and Liverpool’s Harvey Elliott appear the only players poised to breakthrough in top sides this term.

Given his sluggish start to the campaign upon returning to Chelsea after a successful loan spell at Crystal Palace, it would’ve been welcoming for him to perform the way he did here, a mere 24 hours after the senior side toiled but eventually salvaged a 3-3 draw with Germany at Wembley.

ALSO READ: Gallagher and the task of emulating talented academy products before him

Radio talk shows and social media were just two platforms where buzz was ablaze about Borussia Dortmund teenager Jude Bellingham – again instrumental – stressing an under-pressure Gareth Southgate must build around the 19-year-old with the World Cup just two months away.

England’s gung-ho approach to going 2-0 down on Monday saw them at their attacking best, and while a handful can produce individual moments of creative brilliance, Gallagher is one of those infectious players who caught the attention of senior national team staff previously.

There are other young midfield talents at weaker clubs currently playing their trade in the Premier League on a weekly basis, who appear to have leapfrogged – or at least made their case known – that they too are knocking on the door as far as senior consideration is concerned.

Aston Villa’s 21-year-old Jacob Ramsey is one, while the other created Gallagher’s goal with some intricate play at the byline – not the first time he’s done so already this season.

Everton winger Anthony Gordon released a cutback which, at close-range, the Chelsea midfielder couldn’t miss to give them a 2-1 lead less than 90 seconds after the restart. 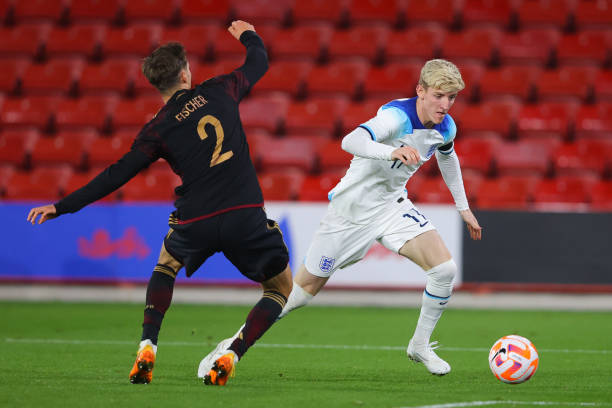 But truthfully, it was his incisive running which paid dividends – having narrowly missed out in the build-up to Folarin Bolagun’s equaliser, the 22-year-old’s tenacious attitude saw him continue showing for the ball and make it difficult for teammates to ignore him whenever near.

That desire to receive possession, the want to pull Germany defenders out of position while linking up well with Gordon and Elliott in particular, was a nuisance Antonio di Salvo’s youngsters couldn’t contend with. You marshal one, then two others break free in transition.

The onus is on him to replicate his Palace form under Patrick Vieira, liberating him with a free-roam midfield role. Merely having the chance to do so again with higher expectations and more responsibility at Chelsea is virtually unheard of – Ethan Ampadu and Billy Gilmour can attest.

With that in mind, it’ll be interesting to see how Thomas Tuchel’s successor approaches the current crop of ambitious youngsters at his disposal keen for regular minutes. In the early days under the German, there were brief glimpses of breakthrough opportunities but not enough.

As the inevitability of injuries and squad rotation are concerned, there will be plenty of opportunity to do that over the next month, with nine games across all competitions between Oct. 1 away at Crystal Palace and Oct. 29 away to – you guessed it – Potter’s old club Brighton.

With so many fixtures in such little time, it’ll be intriguing to see how both he and Armando Broja – both linked with permanent departures away – fare when they get a chance at regular minutes.