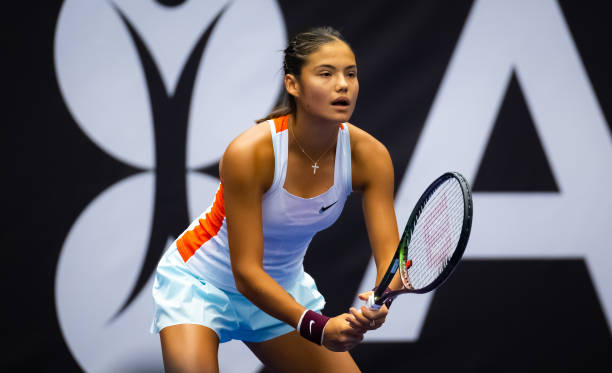 On a day where two of the world’s top male players both crashed out in the first-round of their respective tournaments, Emma Raducanu acquitted herself well but costly errors late in both sets saw her ultimately lose a competitive clash to Daria Kasatkina. Daniil Medvedev dropped just four games, while Wimbledon runner-up Nick Kyrgios excelled on his return to action too.

Alcaraz, Ruud crash out in Astana and Tokyo 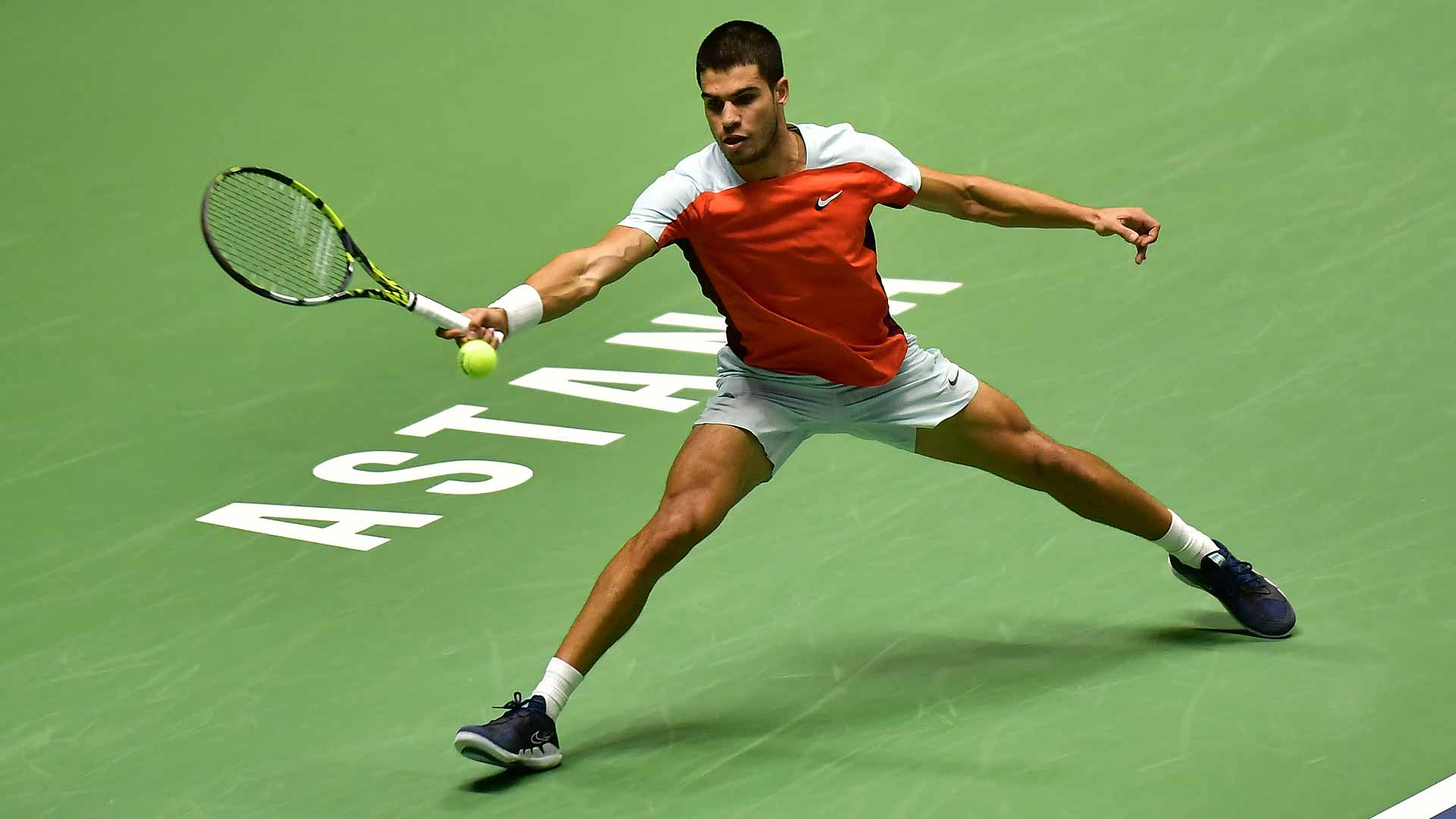 Alcaraz bowed out in the first round at Astana against a determined Goffin (Picture: ATP Tour)

It was always a possibility when the draw came out, but Carlos Alcaraz’s first singles event as the world no. 1 came to a premature end, losing in straight-sets against lucky loser David Goffin.

The teenager, who made history by becoming the youngest US Open champion at Flushing Meadows last month, revealed afterwards that he has lessons to learn after succumbing to the Belgian’s pressure and aggressiveness – one he couldn’t match without spilling errors aplenty.

Goffin’s counterpunching ability and nimble footwork helped assert himself quickly, while refusing to waver under duress as set two could’ve seen the momentum shift rather drastically.

Instead, he saved two break points to go 3-0 up and despite Alcaraz keeping him honest, the 31-year-old held firm – easier said than done – recording a memorable victory.

3 – David #Goffin has won his third career match against the number 1 opponent – in Nur Sultan v Carlos Alcaraz – after the ATP Finals in 2017 and the ATP Cup 2020, each versus Rafael Nadal. Wall.

Goffin, who lost to Alcaraz’s Italian agemate Luca Nardi in qualifying, now faces Stan Wawrinka’s conqueror Adrian Mannarino next up with an ATP 500 quarter-final berth there for the taking. 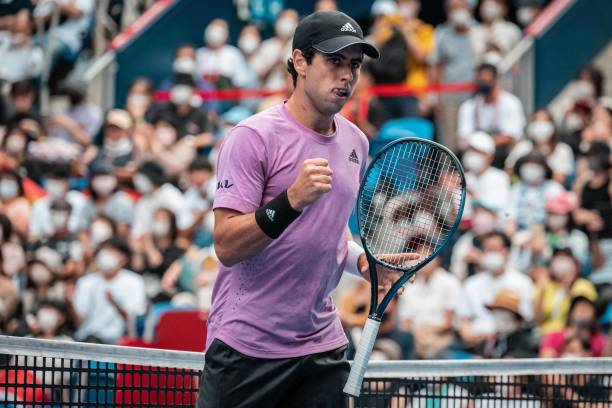 Munar proved too much for Ruud, who has lost early in successive tournaments now

There will be a Spanish player in this year’s Japan Open quarter-finals, as Jaume Munar stunned world no. 3 Casper Ruud in straight-sets earlier today – ending a 0-3 H2H record against the Norwegian, inflicting his second surprise defeat in less than a week after losing early in Seoul.

He plays compatriot Pedro Martínez next for that spot in the last-eight, after his 25-year-old agemate was made to work for it during a 7-5, 6-4 victory over Australia’s Alexei Popyrin.

Elsewhere in Tokyo, it was a mixed day for Popyrin’s Australian compatriots. Alex de Minaur won just five games against South Korea’s Soonwoo Kwon (6-3, 6-2), Thanasi Kokkinakis pushed Borna Coric to a second set tiebreak but ultimately lost from 2-0 up in the breaker (6-4, 7-6).

Meanwhile, his doubles partner and Wimbledon runner-up Nick Kyrgios was successful on his return against Taiwan’s Chun Hsin Tseng — emerging with a 6-3, 6-1 victory in little over an hour.

Although Cam Norrie is sidelined after testing positive for COVID, British no. 2 Dan Evans rallied from a set down to overwhelm Moldova’s Radu Albot 6-7, 6-1, 6-4 before Mackenzie McDonald and Japanese qualifier Rio Noguchi both showed character to win three-set matches elsewhere. 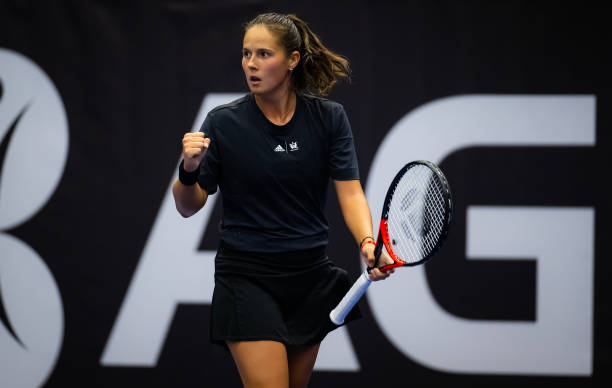 Kasatkina’s first serve was limping late on, but she made Raducanu pay for poor decision-making

Even though her first serve was struggling down the stretch, in what contributed to a tense finish during this competitive clash, Daria Kasatkina gritted her way through beyond last year’s US Open champion Emma Raducanu in another maiden H2H matchup for the British teenager.

After the sad sight of her retirement in Seoul last month, having made her first tour-level semi-final since the aforementioned triumph in 2021, you could understand a little hesitancy against a player firmly in the race for this season’s year-end championships in Fort Worth later this month.

Simply put, you can’t afford to make too many errors against Kasatkina if you want to have a chance of real success. She recorded 28 unforced, another 20-odd forced and the Russian – who lost to Raducanu’s compatriot Harriet Dart at the US Open – didn’t need a second invitation.

You have to make her move, whether that’s side-to-side, back behind the baseline or generally keep her guessing with shot placement. Raducanu was too casual with her forward forays, duly punished for doing so, and the forehand flagged during decisive moments – proving costly.

Kasatkina next faces Seoul champion Ekaterina Alexandrova in R2, after the Russian responded well after dropping set two — eventually winning 6-4, 4-6, 6-2 against the former world no. 1.