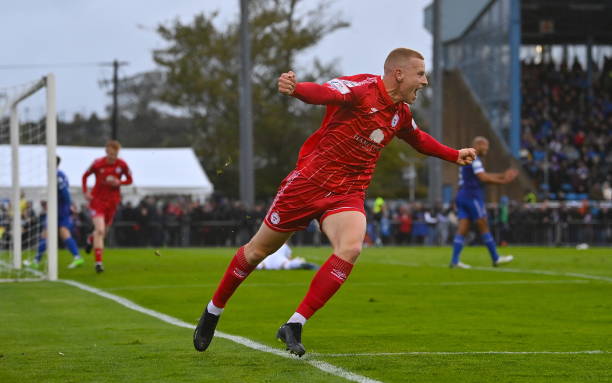 Gavin Molloy’s first-time finish after 15 minutes helped Shelbourne secure their FAI Cup Final berth with a 1-0 victory against a blunt Waterford display at a wet and windy RSC. It was far from a vintage performance, but the visitors were good value for their semi-final victory and now face league rivals Derry City in next month’s final after they won against Treaty United.

Boyd was an ever-present threat in attack for Shelbourne, despite drawing blank in-front of goal

The result means Damien Duff’s side will play Premier Division rivals Derry City on November 13 in the showpiece event at the Aviva Stadium, with an automatic UEFA Europa Conference League qualification berth available for the winner.

Despite a promising start with Darragh Power, Phoenix Patterson and Roland Idowu all earning dangerous positions in the Shelbourne box, Waterford soon found themselves a goal behind.

Matty Smith’s defence-splitting pass into the area still needed finishing, and Molloy wheeled away to celebrate after watching his strike arrow into the bottom corner.

Idowu limped off injured midway through the first-half and his Waterford teammates could’ve easily been two or three goals behind at the break.

Instead, it was just one as Luke Byrne headed onto the woodwork from close-range while Sean Boyd was an ever-threatening figure in and around the box.

The second-half was a frustrating, stop-start affair with plenty of stoppages for fouls, bookings and changes as Shels retained their slender advantage without much in the way of real quality.

Mark Coyle tried his luck from distance just before the hour mark but goalkeeper Paul Martin was equal to the effort, while the energetic Patterson forced Brendan Clarke into tipping his free-kick over the crossbar, only to produce an underwhelming delivery from the subsequent corner.

Patterson in possession but under pressure from Mark Coyle, a much-needed cog in Shels midfield

Coyle was shrewd but composed with his game-management tactics, advancing the ball forward through midfield to relieve pressure on his teammates – who Duff described as leggy post-match.

This was far from a vintage display, but the most important thing about cup semi-finals is to win them. We were a dubious officiating decision away from an additional 30 minutes though.

As the clock ticked into stoppage-time, Tunmise Sobowale headed across goal and the home fans shouted for a penalty for handball in unison, though those appeals were rightly ignored.

Despite a promising start, they didn’t create enough nor deserve to take this tie into extra-time.

For all the talk of their five-match winning streak – a step-up in competition or not – they were poor. Back into the Final for the first time since 2011, winning ugly along the way while maintaining their perfect defensive record in the competition, Shels are underdogs vs. Derry.

They won’t care. Duff said afterwards this achievement blows away anything he’s ever done in his near 20-year professional career, which feels like hyperbole but the sentiment remains.

Win the big one next month and perhaps that might change. Before then, they’ve got three games in seven days: starting with Derry themselves on Friday night.