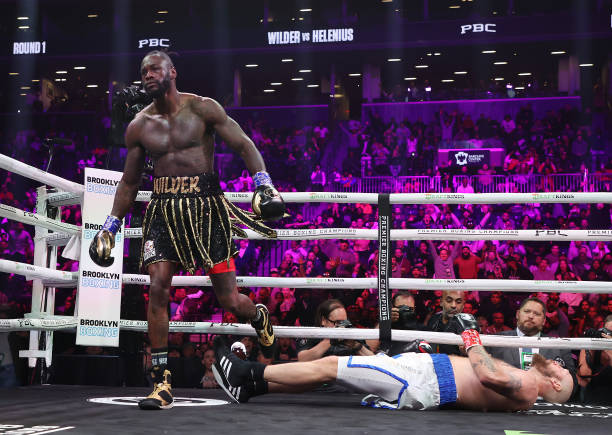 Blink and you’ll miss it 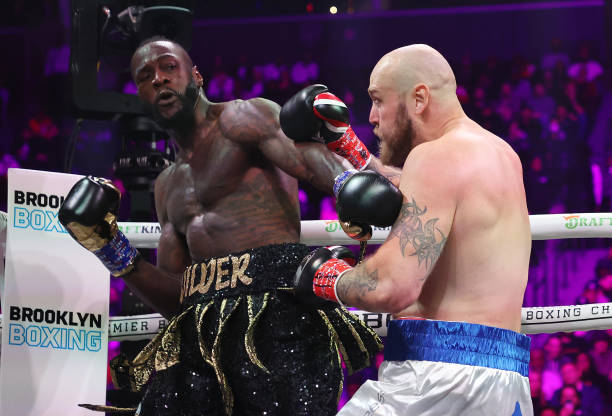 Helenius charged forward as Wilder backed into a corner, but before the 38-year-old knew what had happened, he was flat on his back laying motionless as the Brooklyn crowd erupted.

With the stoppage officially coming at 2:57 of the first round, it again reinforced what the Bronze Bomber has said in the past about the danger he poses to prospective opponents.

He only has to land one fight-ending punch, while the opponent needs to be perfect for 36 minutes – avoiding his devastating power shots in the process – to earn a decision victory.

Former title challenger Luis Ortiz has twice come close, but was viciously knocked out on both occasions in the span of 19 months. Helenius becomes Wilder’s 42nd KO victory, something the 36-year-old achieved with his third punch landed of the evening, per CompuBox’s statistics.

“Robert has the heart of a champion, I knew what he was capable of. I didn’t take him lightly at all, know he really wanted this.

When you fight Deontay, you have to have your A-plus-plus game… I set him up, allowed him to reach and I attacked. It was a great fight.”

Speaking of great fights, critics can’t help but salivate at the prospect of three opponents for Wilder in 2023: three-belt champ Oleksandr Usyk, as well as the man he dethroned in Anthony Joshua and a familiar face in a rebuilding Andy Ruiz Jr – another former world champion.

Wilder, who said his training camp was finally fun again for this fight – armed with 700 rounds of sparring – called out Usyk’s no-show after the Ukrainian previously stated he’d be ringside to watch and likened it to false promises from another world champion previously.

“When guys see these knockouts they turn the corner away from me, I’m ready for whatever. Whether it’s Andy Ruiz Jr or Usyk, Deontay and the excitement in the heavyweight division is back. I think it’s gonna be very difficult, I’ll be very surprised if he sticks to his word. The last champion that came to a fight that said he would give me a fight went the other way after a devastating knockout.

We talkin’ about Joseph Parker. We’ll see what happens and I’m gonna keep Usyk to his word. We’ll be calling his team and whoever his handler is, we’re gonna see what’s up. If he a man of his word, what a hell of a fight it would be.”

Usyk hasn’t got long left in the fight game and while it would make better business sense to take an easier opponent than Wilder, ala Fury and his reported Dereck Chisora trilogy on Dec. 3, it’s unlikely he’d be motivated to engage with fights that don’t excite him at this stage of his career.

Perhaps hastily, Fury and his team tried pressuring Usyk into accepting a quick turnaround between bouts for a chance to become the sport’s first undisputed heavyweight champion of the four-belt era after besting Joshua during their rematch in Saudi Arabia on August 20.

However, the 35-year-old won’t return until the first quarter of 2023 at the earliest as he rests and recovers from niggling injuries. Although Ruiz-Wilder is easier to make given they’re on the same network, fighting Usyk for versions of the world title would take precedence if it could be made.

While there are big fights to be made and movement atop the heavyweight division usually goes quite slowly, it’ll be interesting to see what’s next – especially when you add into the equation Joe Joyce’s knockout win over Parker last month too. Options aplenty await the elite.