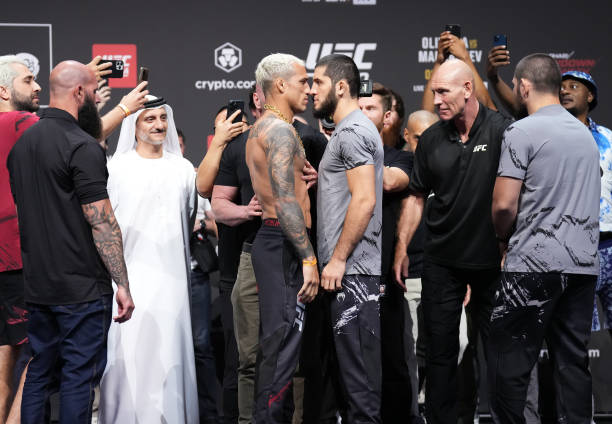 Tonight’s UFC 280 PPV card is packed with multiple fights that could headline their own events. Two championship clashes, one intriguing bantamweight scrap, a of contrasting lightweights and a flyweight title eliminator all on the main card. That’s ignoring Belal Muhammad vs. Sean Brady, while Volkan Oezdemir and Muhammad Mokaev are among those also on the prelims.

No better time than the present 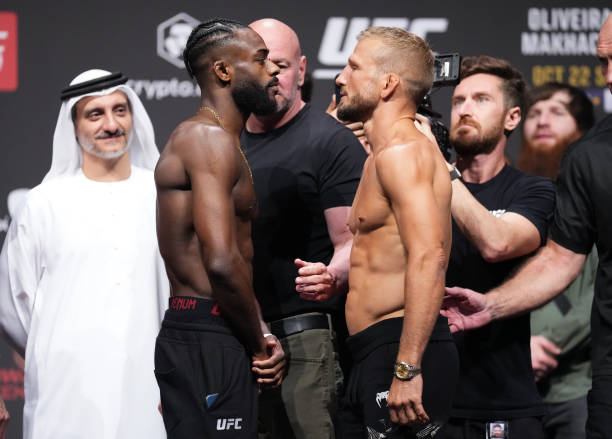 UFC 280 is finally upon us and after months of anticipation, tonight’s PPV event – the first in Abu Dhabi for a year – could easily exceed sky-high expectations with intrigue and storylines aplenty.

Last time the promotion went there, Petr Yan outclassed Cory Sandhagen to win the interim 135lb belt and set up an important rematch vs. Aljamain Sterling after their initial championship duel ended controversially with a DQ loss and title changing hands eight months prior. 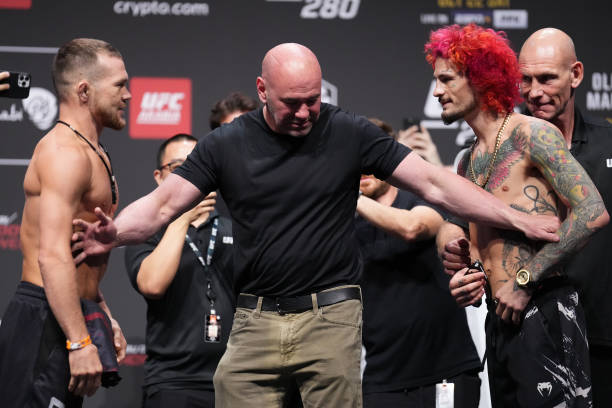 Ready to go: Yan (left) and O’Malley (right) face-off at the UFC 280 ceremonial weigh-ins on Friday

Now, he faces a burgeoning star in Sean O’Malley – yet to be tested among the true elites. A heavy underdog for a reason, the rising contender [11] believes the UFC forced the Russian into taking that fight after reportedly turning down a challenge against the in-form Marlon Vera.

“Sean is a UFC project and Conor [McGregor] wannabe, but the result of this matchup [as opposed to McGregor-Aldo] will be different. You saw my fight with Aldo already. No doubt he has good striking skills and a very unorthodox style, but if we consider the mental part of things, I believe I’m stronger.”

TJ Dillashaw thinks he’s the greatest bantamweight in history, and will cement that claim by becoming a three-time champion in the division against a motivated Sterling here – although the lingering sense of his drugs suspension for EPO means he’ll always be regarded as a cheat.

“For him to go out and say he’s the greatest of all-time right now just shows his arrogance, which is exactly what I talk about. I can’t wait to just bring him a little bit of humble pie.” – Sterling on Dillashaw’s claim

Both lightweight title challengers have revealed their openness to fighting Alexander Volkanovski in 2023 after the featherweight champion was announced as a back-up option for this eagerly-anticipated clash, successfully made weight and has immersed himself at 155lbs.

“I think Islam deserves all the respect in the world, but he should’ve fought somebody maybe in the top-five like I did, not just surf on someone else’s wave and skip the line. It’s for the history and for everything [Khabib has] done. The reason why this fight is happening is because of him,” Oliveira on Islam

Speaking of Volkanovski – the next lightweight title challenger regardless of the result – Beneil Dariush would’ve been initially annoyed, but has put his title fight snub behind him and is focused on the task at hand against a dangerous up-and-coming contender in Mateusz Gamrot.

Katlyn Chookagian again defends her no. 1 ranking at flyweight, though has sacrificed 20% of her fight purse after coming in overweight – the first time in the 33-year-old’s career – far from an encouraging sign as a bullish Frenchwoman awaits her in an in-form Manon Fiorot next.

Elsewhere on the card, Belal Muhammad defends his top-5 ranking at 170lbs against highly-rated prospect Sean Brady – who impressively blitzed past Michael Chiesa in his last outing.

I’ll have post-fight coverage and a review in the early hours on Sunday BST, so be sure to stay tuned to the site this weekend. A new champion will be crowned at lightweight with Volkanovski watching on Octagonside, while questions need answering at bantamweight too.