After lifting a third consecutive Premier Division title on Sunday, Shamrock Rovers play for pride in Thursday’s 5.45pm KO from the Tele2 Arena against Group F winners Djurgardens – their final UEFA Europa Conference League fixture. Will they leave Sweden with a morale-boosting victory among European competition, or do the hosts have a surprise in store for tomorrow’s guests?

Top vs. bottom as Hoops hope to end their euro winless streak 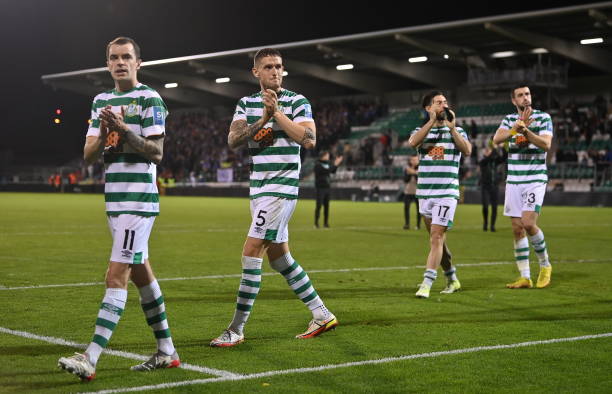 (L-R): Kavanagh, Grace, Towell and Farrugia applaud their fans after a 1-1 draw vs. Gent last week

The Hoops were in a celebratory mood to finish their eventful weekend, after Rory Gaffney’s 10th league goal of the season secured a 1-0 win over Derry City in their final home game.

His rebounded finish helped end Derry’s 16-match unbeaten run and it could’ve been a heavier scoreline too, Richie Towell and Andy Lyons both coming close with other opportunities.

By contrast, Haris Radetinac marked his 199th Allsvenskan appearance for tonight’s hosts with a stoppage-time winner to sting Norrkoping late during their own 1-0 victory on Monday evening. 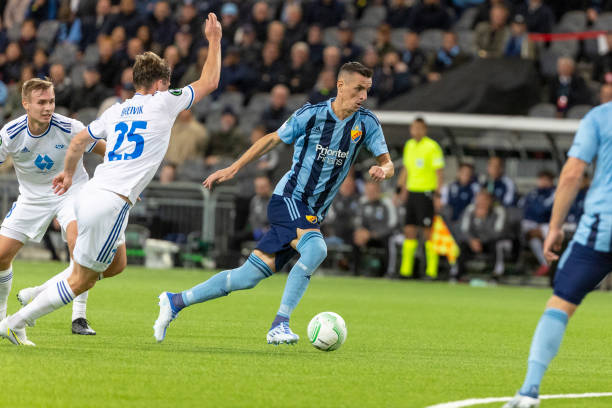 Radetinac (centre), here against Molde, was their last-gasp matchwinner on Monday night

That last-gasp strike confirmed they’ll finish as runners-up behind Hacken with one domestic fixture still to play, their best season since clinching the title in 2019.

While their place in the knockout rounds after Christmas is already confirmed, they won’t take this fixture lightly. As said themselves on the club website, glory, points and money are all at stake here.

This is their first foray into UEFA group stage football but you wouldn’t know it, still armed with an unbeaten run (W4, D1) after recovering from a two-goal deficit to beat Molde 3-2 on MD5.

Rovers, by contrast, scored first after just three minutes but had a second-half goal disallowed, were down to ten men and conceded an equaliser during a forgettable 1-1 draw with Gent.

Dylan Watts and Chris McCann were forced off through first-half injuries, while substitute Justin Ferizaj was sent off after two yellow cards – one for a shirt grab, the second after a late tackle.

Moments later, an unwelcome equaliser arrived to turn the tables in a match they were controlling.

€166,000 richer after their second point of the group, Rovers have underwhelmed among better opposition in Europe – one goal from five games is the lowest tally of all UECL group stage teams.

The two sides played out a goalless draw at Tallaght in the reverse fixture on MD1, but plenty has happened for both during the two months since. Will this be a positive end to a poor group campaign for the visitors?