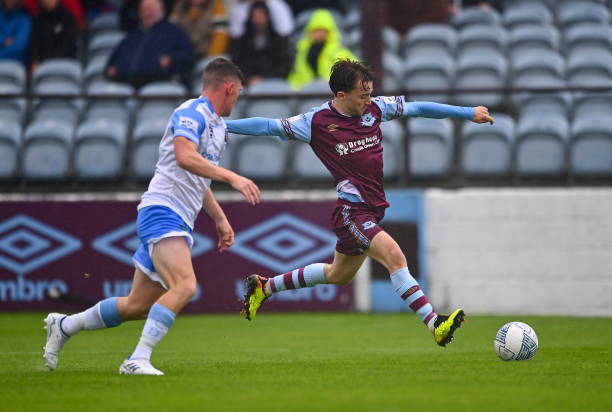 Goals from Darragh Markey and Dayle Rooney saw Drogheda United finish the Premier Division campaign victorious with a 2-0 home win over already-relegated Finn Harps tonight. While they were comfortable early on and created chances aplenty during a busy second-half showing, this morale-boosting result doesn’t mask the fact there’s much to improve before 2023. 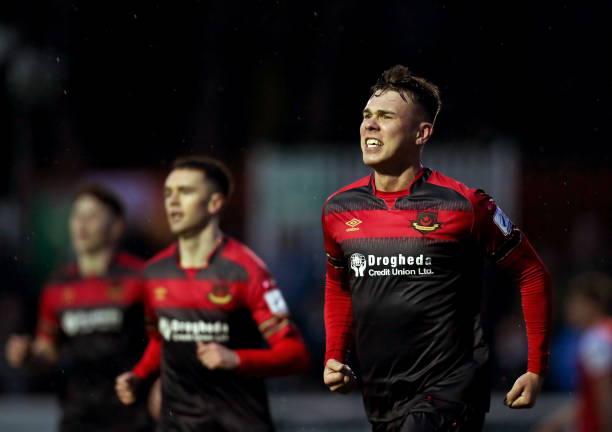 Dayle Rooney, pictured here celebrating against St. Pats in April, eventually got a goal himself

On a night where their manager Kevin Doherty spoke about a side decimated by injuries, the Drogs finished on a high in-front of their home crowd – sealing their first home win since mid-August against FAI Cup finalists Shelbourne.

It was an uneventful first-half with few clear goalscoring opportunities, unsurprising given there was nothing for either to play for besides pride.

That didn’t stop Darragh Noone floating a brilliant cross into the box, the visitors failed to clear their lines and the ball dropped to Markey – patient before nestling home a sidefooted effort.

It could’ve been 2-0 shortly afterwards, as Dylan Grimes and Ryan Brennan combined from Lee Steacy’s long searching ball forward, but lacked execution with time and space in abundance.

Brennan’s cross flew wide of the far post, but Grimes – who took a brilliant initial touch – should’ve tested a shaky James McKeown in the Harps goal.

Ethan Boyle could’ve equalised but for a lacklustre connection on his snapshot in the area, before Luke Rudden took aim near the halfway line after spotting Steacy in no man’s land.

Noone had his blushes spared after an underhit backpass to a teammate was almost punished, while Gary Boylan curled a free-kick narrowly wide from distance too. 17-year-old midfielder Emre Topcu, on as a first-half substitute, almost doubled the lead in stoppage-time.

His strike wasn’t hard enough, but gave Harps another warning sign they didn’t heed because after the break, Drogheda dominated and created chances aplenty to add further goals.

Filip Mihaljevic headed Keith Cowan’s diving header to safety near the goalline two minutes after the restart, while Topcu, Markey, Rooney and Dane Massey all probed as they searched for more.

Markey hit the woodwork at the end of a beautiful passing move which had Drogs fans purring in their seats, 15 minutes before Darragh Nugent hit the far post after Noone’s incisive pass.

Highly-rated goalkeeper Fiachra Pagel made his senior debut off the bench in the second-half, while teenage fullback Dylan Molloy and Nigerian forward Victor Arong came on late as fans will be eager to see genuine minutes granted to more of their academy talents in the new year.

Topcu and Nugent both came close with individual efforts, before Rooney put the game to bed in the 90th minute as Topcu assisted him on what was a memorable end-of-season appearance.

Drogheda’s main priority next season should be about bridging the gap to their rivals and becoming the best of the rest.

While their defence naturally needs strengthening, they won’t achieve their targets without a more clinical edge in the final third. They could’ve easily scored six or seven here.

Finn Harps manager Ollie Horgan angrily remonstrated with the match officials after full-time in what quickly became a frustrating evening, but you can’t help wondering what might have been had his players displayed the same fight to avoid departing the division with a whimper.

There were said to be around 20-25 travelling Finn Harps fans who braved the elements and a difficult Sunday schedule with the 7pm KO to witness their side limp into the country’s second-tier, and you can’t help but empathise after what was another disappointing away display.

They’ve been hovering near the bottom since securing promotion in 2018 and cliche or not, sometimes you have to go back to move forwards.

There’s likely to be a lot of soul-searching and player movement between now and 2023, so results might not be immediate – but it can be done.