After his Oct. 8 showdown with Conor Benn was cancelled, Chris Eubank Jr’s world title pursuit resumes against former super-welterweight world champion Liam Smith. Both are in the back half of their respective careers and after contrasting routes back to top contention, they collide in Manchester on January 21. So, who said what at the first official press conference yesterday? 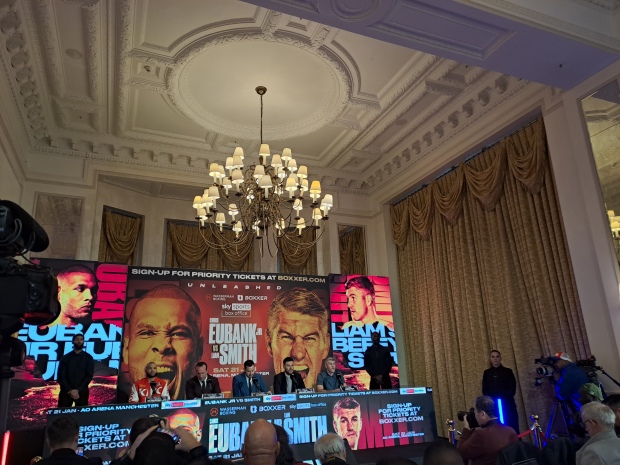 The two fighters, their promoters and Sky’s Adam Scott at Tuesday’s press conference in London

It feels like yesterday and yet, it’s almost been two years. I vividly remember writing this story in January 2021 about Chris Eubank Jr’s new promotional deal and the stakes that came with it.

That’s why, aged 33 and heading into the new year, 2023 must be about world-class activity and righting the wrongs of previous years for a man who still divides public opinion.

He began the press conference addressing himself as the bad guy, an interesting observation given the goodwill and plaudits that came his way after the Conor Benn cancellation fallout.

Saunders had eight 12-round fights, including wins over then-unbeaten trio Gary O’Sullivan, John Ryder and Emmanuele Blandamura (RD8 KO) before the Eubank win. Food for thought?

Even as eyes were transfixed on Eubank Jr’s KFC jacket, he later stated a Saunders rematch is one he welcomes as the divisive southpaw prepares for his own in-ring return. More on that later.

Although domestic matchups are often compelling, interest would naturally dwindle with a loss here. Back on that matchup and Chris, who said this was one for the fans, said fun will be had:

“An awesome fight, I think [it’s going to be] the most fun I’ve had for quite some time, the styles are gonna gel excellently and fans are in for a treat. It can’t be boring, just from how we fight, makes sense, two guys at the top of the UK scene – and world – gonna have fun.”

Given the Eubank name, a ridiculed nextgen nickname and superstar persona for someone whose career is at a crossroads, perhaps too much fun has been had.

What did liam Smith say? 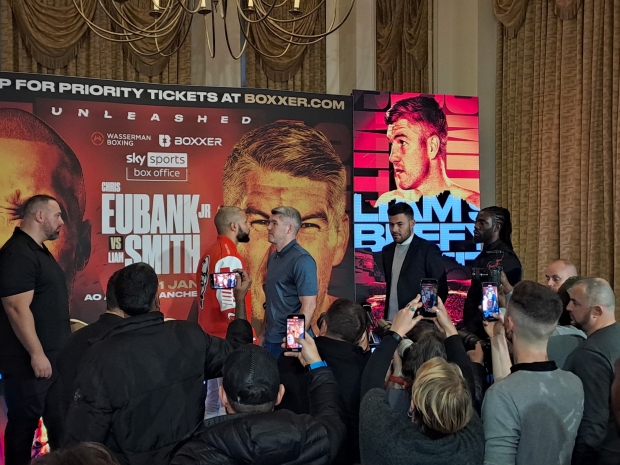 When Chris spoke about wanting to end every fight inside the distance, swatted away suggestions it’ll be a 50-50 fight – many said the same before he fought Williams – and said he deserves more respect than to be classed as someone on Smith’s level, the retort was inevitable.

“You got a proper leg-up because of your name, dad was a superstar.

You’ve just said you look to finish every opponent, go back to Marcus Morrison you wanted to carry him because of Roy… how many times did you put Liam Williams down, four was it? He got to points, made it seem like a close fight…”

Although he fired back with reasons why he didn’t finish either opponent, citing injury against Williams and a desire to bank rounds against Morrison, the damage was already done.

Therein lies the problem. Eubank Jr, for all his flashy speed and punch power, the patented left hand, his durability and more, critics will point out that he’s not the most skilled boxer.

George Groves exposed that weakness with a masterclass performance to retain his WBA super-middleweight title back in February 2018, and as you age, it doesn’t get easier to hone.

Perhaps that’s why his promoter, Kalle Sauerland, paused before continuing to list the traits and abilities they feel he has over Smith: “experience, youth, speed… skillset and size. Sorry, Liam.”

The change in pitch towards the end sounded like he was questioning himself, does Eubank Jr truly have the better skillset? Smith doesn’t seem to think so, and spoke about the weight too.

“Chris is having a laugh saying he’s sponsored by KFC, don’t. If he wants to keep doing that… he doesn’t make the weight as great as he makes out, it’ll be tested if it does.

His chin and body will be tested, he’s not stupid. I know his whole team are aware [of how tough this fight is], Kalle made the Conor fight too but with no clause… this is just the game he likes to play.”

BOXXER chief Ben Shalom co-signed that sentiment throughout, stressing it was a fight Sky have long been pushing for and Eubank will be fighting the best version of Smith, whose improved after world title defeats by Canelo Álvarez (2016) and Jaime Munguia two years later.

“I’m not sure Kalle was as keen on this but it’s the best fighting the best, Junior has stepped up twice to world level and fallen short. Smith comes forward, one of the best on the inside, could’ve had it in December but wants it in January – this isn’t a payday, he wants to win.

A tough fight for both, truly 50-50 and splits opinion, British boxing wanted and needed, perfect for both. Chris would have preferred Benn or Felix Cash and there’s a reason for the rematch clause.”

Guess we’ll have to wait and see. 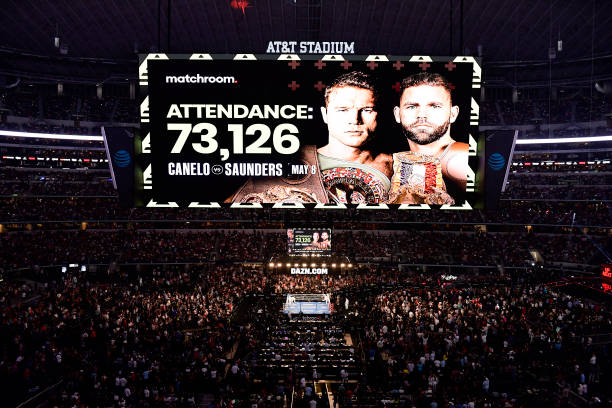 Although he lost, Saunders wants more big-money nights like his Canelo clash last May

Retirement speculation has lingered since Canelo snatched the WBO title and broke the orbital bone of Saunders (30-1, 14 KOs), who gained weight and had been relatively quiet on social media during the months immediately after suffering his first professional defeat in May 2021.

However, the 33-year-old confirmed in September that he’s back training twice a day now and enjoying it, while his trainer Ben Davison confirmed the same – he’s lost a lot of weight – while keeping an eye on the Eubank-Smith matchup early next year, should he decide to return.

It seems inevitable he will at some stage, perhaps with a warmup bout before moving onto bigger names, given he’s repeatedly spoken this year about the desire for a Eubank Jr rematch.

Elsewhere, here’s some news I uncovered myself at the press conference…

Pictures captured by me, unless expressly stated otherwise