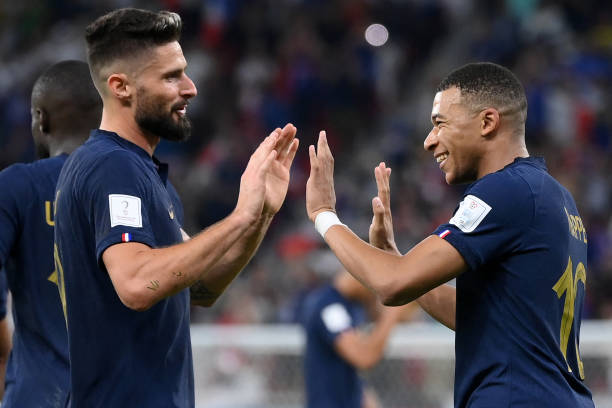 Les Bleus prevail, but not without Polish pressure 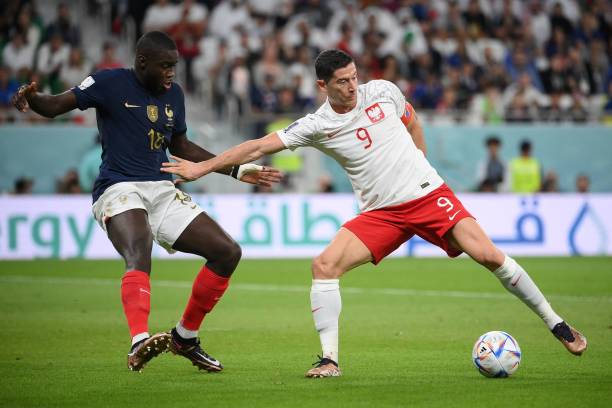 Lewandowski in possession, with former Bayern teammate Dayot Upamecano closing him down

However for their supposed creative deficiencies, they began with renewed energy and impetus, taking the game to the world champions – much like Australia managed in the group – but whether they could provide service into Robert Lewandowski would prove a decisive factor.

The 34-year-old has scored 18 goals in 19 appearances since his €45m (£38.6m) Barcelona move, but translating that formidable form on the international scene has proven historically difficult.

While the game was still finely poised, he didn’t have a true sight of goal. Besides firing a hopeful long-range effort narrowly wide of Hugo Lloris’ far post midway through the first-half, it was his opposite number nine who had the best chances and soon converted one to open the scoring.

Przemyslaw Frankowski’s heavy touch near the touchline was compounded by panic, giftwrapping France the ball back in transition.

Antoine Griezmann fed Ousmane Dembele, who in turn fizzed a low ball across the area for Olivier Giroud. All he had to do was slide across and finish, but convert he did not.

French fans were in disbelief as they saw replays on the big screen, but Giroud would soon redeem himself: Upamecano into Mbappe, a nutmeg pass into the Milan man, who took a touch to control before wedging the ball – almost like a golf swing on the turn – into the far corner.

Juventus goalkeeper Wojciech Szczesny, who played over 6,000 minutes over three seasons alongside Giroud at Arsenal, was helpless to save that effort. The 32-year-old produced at least five saves for the third consecutive tournament game, but had no answers for that deft effort.

After his continous duels against Aston Villa’s Matty Cash and co, Kylian Mbappe added a well-taken brace with razor-sharp finishes, 15 minutes apart in the second-half, just as Poland were surging again and gaining encouragement from France’s seeming inability to double their lead.

They soon did to settle their quarter-final berth, but this was far from straightforward.

A word on Lloris 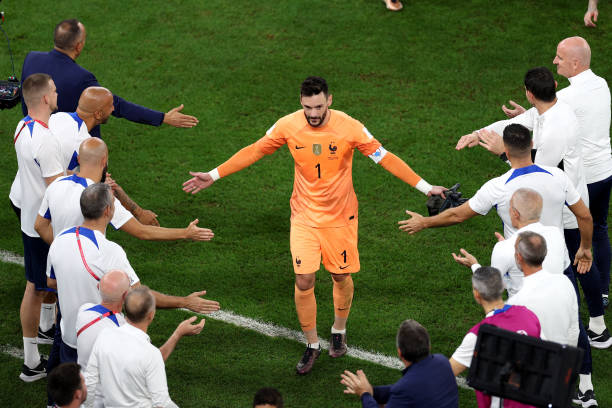 Lloris gets a guard of honour, celebrating with teammates and staff after their 3-1 last-16 victory

For context, he kept three (Peru, Uruguay and Belgium) en route to their triumph in Russia four years ago but given his high standards, will be disappointed that run wasn’t ended tonight.

Despite his excellent shot-stopping ability, Lloris remains a divisive figure whenever the conversation about the world’s best goalkeepers are concerned. His decision-making is often scrambled and in moments where you need to exude composure, he conveys the opposite.

The same could be said on a few occasions against Poland, whose forward pressure and aerial balls caused Lloris to flap at loose balls, hesitate with distribution and this could’ve been a completely different story, had Varane not hooked Kaminski’s first-half effort off-the-line.