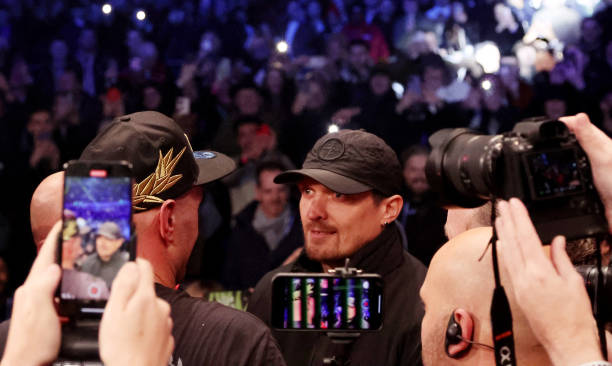 During his post-fight press conference, WBC heavyweight champion Tyson Fury answered a range of questions while vowing to give fight fans the big bouts “they really crave,” insisting a unification bout against Oleksandr Usyk can happen in the first quarter of 2023, before a domestic duel against Joe Joyce later on in the year – with Wembley a mooted destination.

Fury: Joyce a bigger challenger to me than slick southpaw usyk 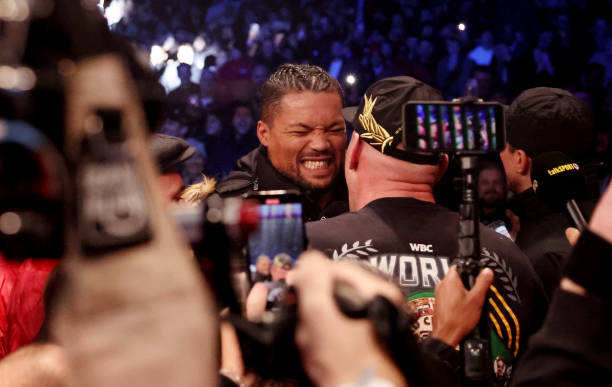 Fury interacts with Joyce after his R10 TKO win over Chisora, a future foe he has a lot of respect for

Tyson Fury declared 2023 would be the biggest year of his career yet, and after an opening address beckoned journalists to ask their questions in the post-fight press conference. “First of all, let’s talk about Usyk because I can now. Chisora is no easy pushover,” the 34-year-old said.

Even the most faithful Del Boy supporters would’ve winced upon hearing that, especially having seen the action unfold from a chilly Tottenham Hotspur Stadium in a trilogy no-one asked for.

But, as Top Rank boss Bob Arum later reiterated, boxing is as much show business as it is sport.

Other boxing coverage to also read:
Eubank Jr vs. Smith: Given their world title ambitions, neither can afford to lose on Jan. 21
Denzel Bentley vs. Hamzah Sheeraz: Both boxers open to possible future showdown
Adam Azim’s avalanche rains down on helpless Charlton, as Lawal and Gilley both win big

after more failed talks, joshua treated as an afterthought 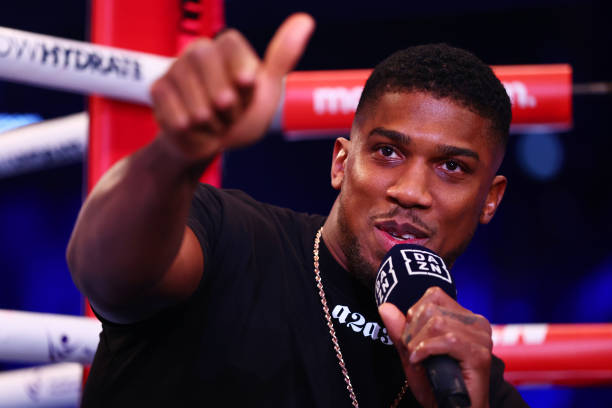 Fury’s team were perhaps more hasty than truly hopeful they could prove successful in enticing Anthony Joshua into that primetime slot, just three months after losing a competitive Usyk rematch, knowing full well how drawn out the supposed negotiations were in 2020.

The last time Joshua boxed twice in three months was all the way back in 2016 – a second-round world title KO win over Charles Martin on April 9 was followed by a R7 TKO stoppage against Dominic Breazeale as both undefeated Americans left empty-handed at the O2 Arena.

It’s fair to say a domestic duel between those two superstars has again been thrust on the backburner, especially considering Joshua’s reported road map back atop the division features matchups against the likes of former foe Dillian Whyte and unbeaten Croatian Filip Hrgovic.

“Usyk’s very good, undisputed cruiserweight champion and unified heavyweight champ but I do a job on him. I wanna prove it, not just say it, let’s get that one on.

Everyone asks who is tougher, my biggest challenge is Joe Joyce: He got ripped off in the Olympic final, beat world-class fighters – Jennings, Dubois, Parker – is mandatory ready and we’ll do Juggernaut next if Usyk can’t be made.”

As for the blown up middleweight jibes he’s repeatedly thrown the Ukrainian’s way, he touched on Usyk’s amateur career – where he boxed at 75kg (165lbs) and famously lost a four-round decision against Shawn Porter in 2006, saying there’s merit to Fury’s tongue-in-cheek comments.

When asked to rank the division’s top guys, he also briefly played matchmaker:

“I think it’s a toss-up between him, Wilder and Joyce for the world’s #2 [heavyweight], but I don’t think anyone takes Deontay’s power. Who wouldn’t wanna see Wilder vs. Joyce?”

When quizzed about how his footwork compares to Usyk, he pointed to the unified champion being older – with considerably more amateur experience – and revealed he doesn’t believe his speed or ringcraft deserves the plaudits for being the division’s best until they face off.

He gave examples of the two-fight series with Joshua, while Derek “put it to him” and Chazz Witherspoon landed some big shots too during his heavyweight debut three years ago.

“He’s not the hardest man to hit. My long-range speed and feints will do the job, wanna have a boxing match, think I’m faster, why not?”

We’ll wait and see, as Fury’s fearsome frame should theoretically prove too big and strong for a long-reigning cruiserweight who has since bulked up – but write off Usyk at your peril.