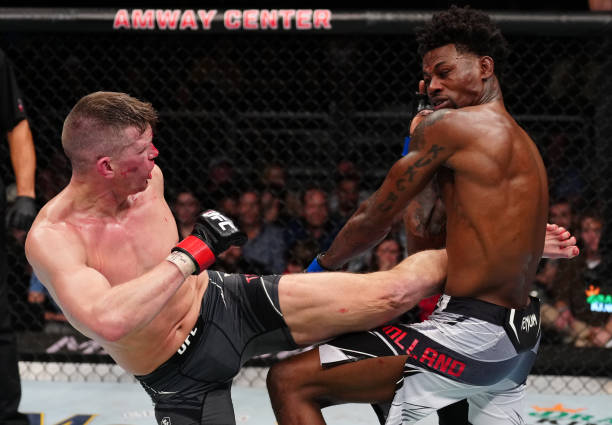 Stephen ‘Wonderboy’ Thompson danced with some first-round danger before rolling back the years en route to a R4 TKO victory during a fun battle against Kevin Holland in last weekend’s UFC Orlando main event, while there were big main card stoppage wins for Rafael dos Anjos, Matheus Nicolau and Roman Dolidze – a newcomer in the middleweight rankings this week.

Wonderboy back to winning ways after fun firefight 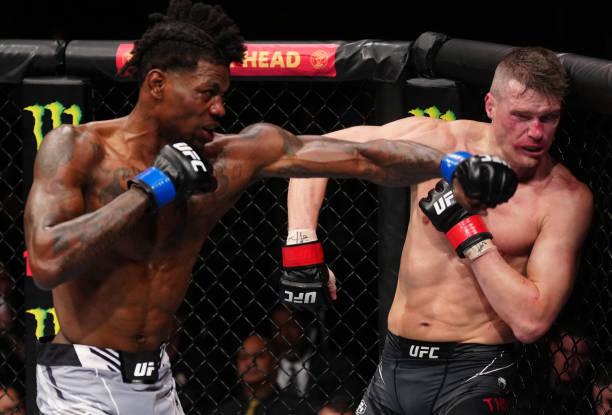 Holland’s powerful rights and knees had Wonderboy seriously hurt in the first, but he responded well

After being beaten quite handily by two grapplers, calls for Wonderboy to retire intensified.

Instead, with his 40th birthday just two months away, Stephen Thompson wowed fans and ultimately stunned a gamely Kevin Holland into submission in their competitive main event clash with speed and accuracy – where a raucous crowd cheering both on added to the drama.

He landed a number of knees and a big right which stumbled Wonderboy back up against the fence, as the disparity in their punch power was quickly evident. However, Trailblazer’s inability to close off angles and capitalise on the moment proved costly.

Wonderboy recovered and would only intensify his attacks as time wore on, having begun the contest at an intense speed while comfortably launching strikes at kickboxing range where he’s most comfortable. Holland didn’t adjust accordingly until it was too late.

While his durability is unquestioned – having not been knocked down in his 11-fight UFC career – and their furious exchanges provided him an opportunity to showcase such power, Holland’s wild misses became more frequent with time as Wonderboy kept peppering him with kicks.

“I wanted to show Wonderboy’s still here, feel like I’m 25, here for the long haul and still got it! You’re gonna see a better Wonderboy.” – Thompson’s post-fight interview

If the end of R2 was an action-packed frenzy, the third certainly wasn’t: Wonderboy landing various kicks in different areas – body, head and legs – a jumping switch, liver and spinning shots just a few, as Holland had no answer to his blitzing attacks up against the fence.

As the round ended, he looked at his right hand as though he’d broken it, perhaps from repeatedly attempting to block that steady diet of kicks launched his way, and soon he was fighting with an ever-growing disadvantage.

Holland’s corner told him he needed to mix the martial arts and stop settling with stand-up exchanges, which he only applied after being hurt by a whipping liver kick early in the fourth.

He twice shot for a takedown, got rebuffed, and after an accidental low-blow timeout, Wonderboy started teeing off with renewed vigour. Commentators marvelled at how a dazed Holland was still standing, only just, and – injury or not – the fight was stopped between rounds.

Holland’s hand swelled very quickly and was noticeable as he took the hand wraps off in the cage, with Wonderboy’s reaction – alerting his father Ray – saying all you needed to know.

dos Anjos does it again 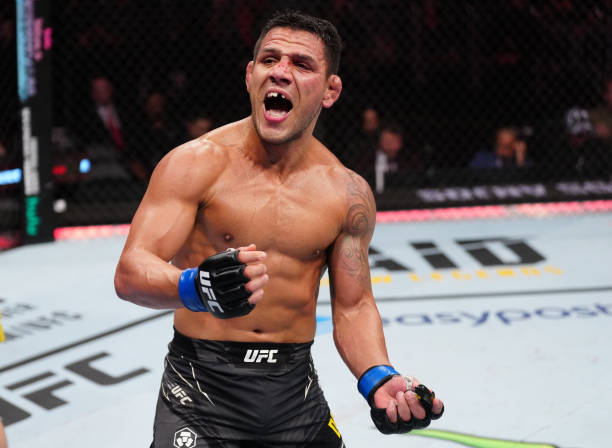 For all of his pre-fight dancing and jovial expressions, Barberena quickly found out an arduous assignment was placed upon his shoulders against a determined dos Anjos display here.

The former lightweight champion, moving back up to welterweight here, previously professed a desire to secure matchups against opposition that would elevate his reputation and motivate him in training. After all, he just turned 38 and has been fighting professionally since 2004.

Statistic: dos Anjos became the first fighter in history to cross eight hours of Octagon time, during his co-main event victory on this occasion.

So, while halting Barberena’s win streak was a nice bonus, he had other things on his mind – evidenced by a telling post-fight interview. RdA almost sunk an arm-triangle choke in, midway through the first round, with the cage coming to Barberena’s mercy pinned on the ground.

dos Anjos would ultimately catch him in the second, securing a submission victory via neck crank, before calling out former two-division champion Conor McGregor for a July matchup. 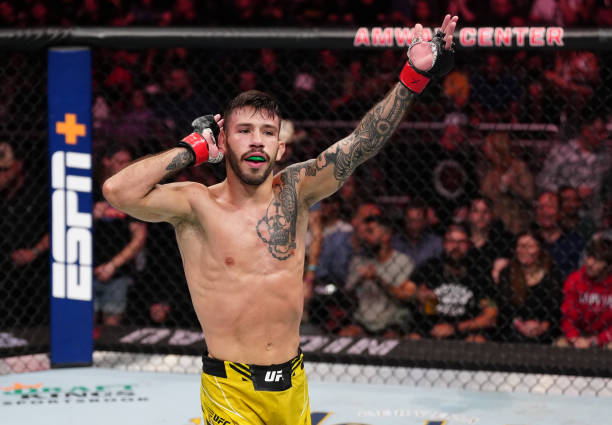 Besides champion Deiveson Figueiredo and interim titlist Brandon Moreno, high-level UFC flyweights are largely respected but not exactly exciting – unless your name is Kai Kara-France.

That’s why there has been a conscious effort from #2 contender Alexandre Pantoja and Brandon Royval, for better or worse, to push the pace and target highlight reel stoppage victories.

Schnell, who cut his hair to successfully make weight last Friday, has now lost three of his last four fights after Nicolau utilised sharp boxing and superior counterstriking to score a first-round knockdown before ultimately icing him in the second. His demonstrative celebration said it all.

He caught him with a straight left early in the second to secure another knockdown, had some good work on the ground before they returned to the feet once more.

Defensively responsible moving backwards, Nicolau caught him up close with a right to the side of the head which instantly flattened him, before unloading a barrage of unanswered punches to finish a one-sided evening’s work.

“We knew he’d come forward, tried to find my moment… you gotta be patient. I always tell people this, they don’t realise, I’m here to be world champion,” Nicolau said in his interview.

The 29-year-old also revealed in the Octagon afterwards that his contract has expired, so he’s temporarily a free agent – but expects they’ll retain him and insists he’s ready for a big fight.

Armed with the longest active win streak at 125lbs (4), and a new #5 ranking in this week’s divisional update, it’ll be fun to see how he fares against the aforementioned Royval or KKF next. 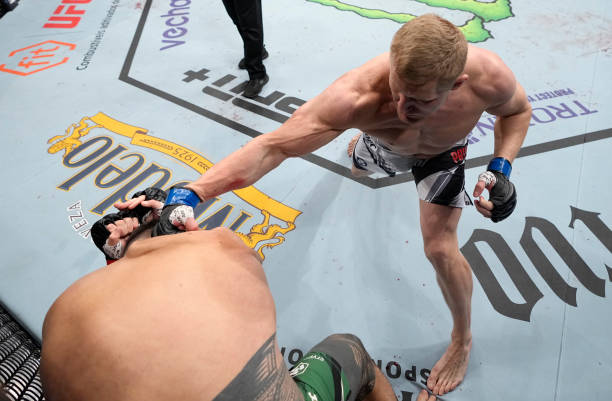 Pavlovich wasted no time at all, showcasing his own devastating power to starch Tuivasa

After being embroiled in a frenetic battle against former interim heavyweight champion Ciryl Gane in September and now having another fight on the bill just three months later, it’s understandable that the lovable Australian knockout master Tai Tuivasa would’ve felt a tad tired.

During fight week, Bam Bam said enjoying Christmas was more important to him than getting on the UFC 284 card in Perth, Australia on Feb. 12 and well, maybe he’ll rethink that on the way home after being blitzed emphatically inside a minute by the heavy-handed Sergei Pavlovich.

Eryk Anders ended a two-fight skid at middleweight with a R2 finish against Kyle Daukaus, before Roman Dolidze thrived in his role as a late-notice replacement for the injured Derek Brunson.

Rewarded for his activity and currently in-form, the Georgian gladly snatched Jack Hermansson’s no. 8 ranking at 185lbs with a R2 finish after unloading punches from back control, a result marking the 34-year-old’s third UFC victory in five-and-a-half months. 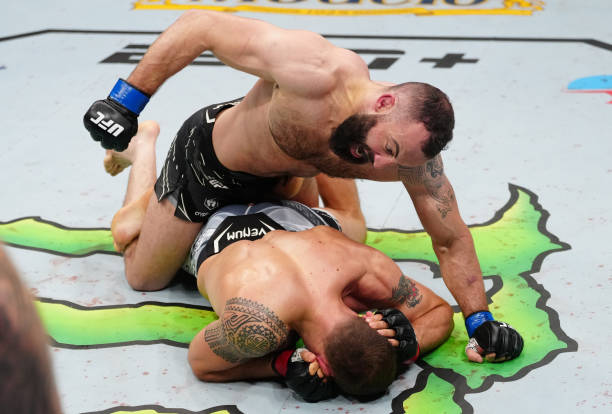 Hermansson, for better or worse, has always flirted with the possibility of being three fights away from a potential title shot and two bad defeats away from falling out of the top-15 rankings.

He’s alternated wins and losses in his last seven fights, including defeats by Marvin Vettori and Sean Strickland, so it’ll be interesting to see how he’s matched accordingly going forward.

In the night’s featured prelim at women’s strawweight, Angela Hill [12] defended her ranking against Emily Ducote [13] with a comprehensive UD win (30-27, 30-27, 30-27), the 37-year-old’s second consecutive win after a difficult-to-read 1-5 win/loss record post-lockdown. 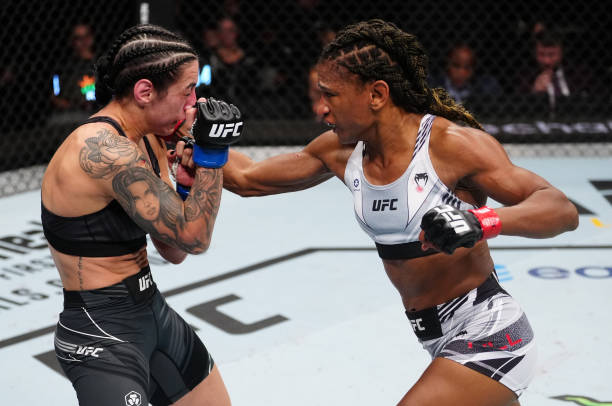 Getting it done: Hill landed 182 significant strikes over 15 minutes – a new career-high for Overkill

Speaking of the old guard at 155lbs, 12-year vet Michael Johnson returned to winning ways after his Fight of the Night split decision defeat against Jamie Mullarkey in July, rally from a sluggish first round (outstruck 23-12) to outpoint Marc Diakiese over 15 minutes (29-28 x 2, 30-27).

Contender Series graduate Jonathan Pearce has a top-15 number next to his name at featherweight, after securing a fifth straight win – this time at Darren Elkins’ expense and with another dominant showing.

At lightweight, another DWCS alum in Israel’s Natan Levy outpointed Genaro Valdez (29-28 x 2, 30-27), while unbeaten 23-year-old American Francis Marshall impressed many while improved to 7-0 as a pro after scoring a second-round stoppage against Marcelo Rojo at featherweight.

Last but certainly not least… 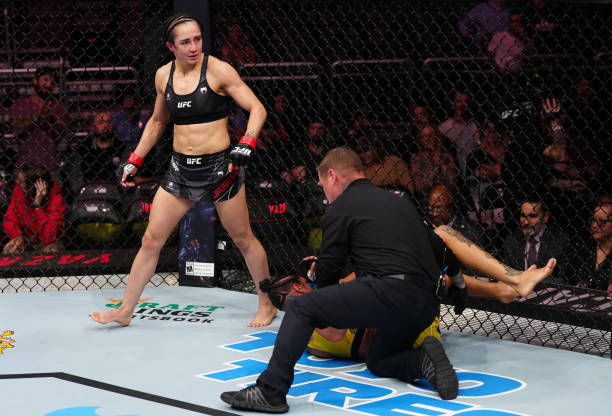 In the night’s opener at women’s strawweight, Yazmin Jauregui overcame a first-round flash knockdown to blitz Istela Nunes with a R2 ground-and-pound finish – improving to 10-0 as a pro.

Jauregui, who captivated audiences with her UFC debut display against Iasmin Lucindo in August, came out aggressively extending her right hand yet needed to fend off some early adversity after absorbing one clean which rocked her to the canvas in the first minute.

She recovered quickly, attempting to grapple before getting back to task and pressed the action from centre ring, keeping the Brazilian’s output honest – which prompted slick counter shots.

After briefly securing a takedown, Jauregui was greeted with a head kick as they returned to the feet but that didn’t deter her from leading the dance with flurries and punch combos.

That foreshadowed a furious finish in the second round, as Jauregui could sense where Nunes’ vulnerabilities were: flooring the Brazilian with pace and more unanswered combos, before they grappled up against the fence.

Jauregui landed slicing elbows on the break, connected with a right to the side of her temple which after a delayed reaction rocked Nunes back to the canvas and the Mexican prospect was soon in dominant position on the ground, searching for a way to finish with style.

Having become the second strawweight in history – after Amanda Lemos – to register two knockdowns in a single fight, the 23-year-old would soon force referee Keith Peterson to stop the ensuing onslaught as more punches rained down on her competitive opponent.

Nunes, who pulled out with an injury when this was initially booked four months prior, looked disappointed after producing a respectable start herself, but while Jauregui’s striking tendencies would prove dangerous against more competent grapplers, there’s no doubting her talent.

Film study, with more Octagon appearances and minutes under her belt, will only serve her well in 2023 and beyond.

Next up: UFC 282, headlined by Jan Blachowicz vs. Magomed Ankalaev for the vacant light-heavyweight title after Jiri Prochazka vacated it with a serious shoulder injury last month.