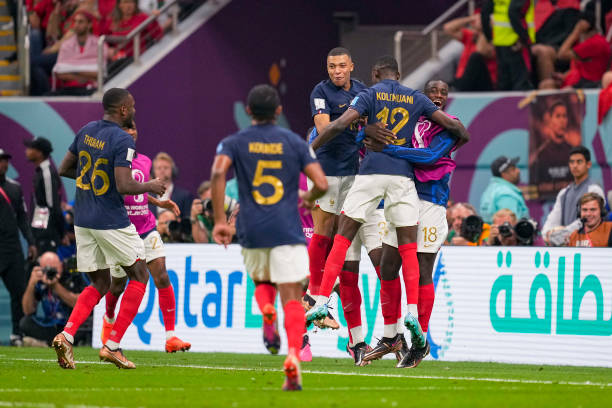 Theo Hernandez’s early strike and a first international goal for second-half substitute Randal Kolo Muani ensure reigning champions France are back in the World Cup final, where they’ll play Lionel Messi and Argentina on Sunday afternoon. Morocco fought valiantly, but Les Bleus can now become the first team since Brazil in 1962 to defend their crown as world champions.

France edge past Morocco, Argentina await in final on Sunday 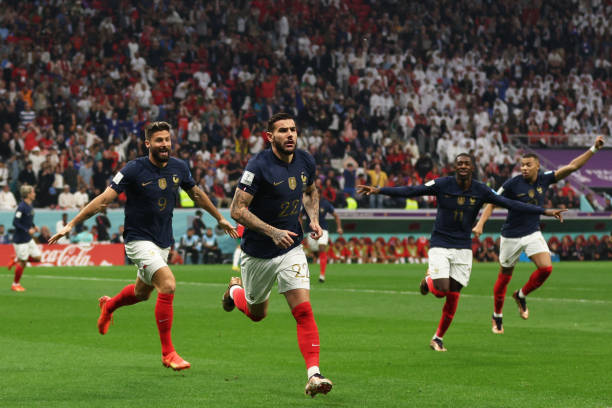 Hernandez wheels away to celebrate after scoring his side’s opener, just five minutes into the semi

RMC Sport reported 55,000 of the 69,000 spectators – almost 80% – were Moroccan. A historic occasion with an unforgettable backdrop, it certainly felt like the Atlas Lions were at home.

Whistles every time France had a sustained spell in possession, loud cheers when they were denied, a surge of noise as Morocco pushed upfield, the twelfth man phrase is often an overused term but there was no such accusation here. They played their part with determined distinction.

A freak group stage own goal against Canada aside, Morocco finally conceded their first strike of the tournament and it came in a flash: just five minutes into their first World Cup semi-final.

Raphael Varane slid a pass through to Griezmann, who instinctively fed Kylian Mbappe to his left.

After two attempts, their star man’s deflected effort found Hernandez at the near post – who volleyed into the ground and beyond Morocco players on the line. It was disastrous defending.

You couldn’t have scripted a more arduous task. They responded well, Azzedine Ounahi testing Hugo Lloris with a curling effort from distance and his teammates recycling possession well too. 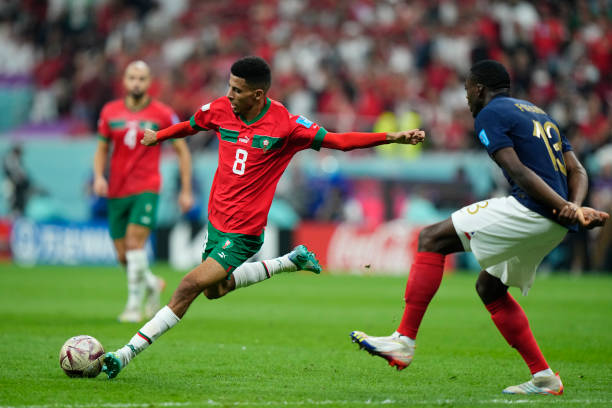 Ibrahima Konate and Youssouf Fofana in particular were aggressive in the tackle and imposing themselves in the early exchanges, forcefully repelling whatever came their way.

Sofiane Boufal’s mazy dribbling saw him evade Fofana’s clutches as he teed up Hakim Ziyech to his right – but the Chelsea winger didn’t strike the ball cleanly and it flashed past the far post.

Instead, his effort cannoned off the post, after Konate’s searching long ball escaped a clearly compromised Romain Saiss in mid-air and the Milan man almost had a fifth tournament goal.

Saiss – stretchered off with a thigh injury in their Portugal win – couldn’t continue and conceded defeat, as midfielder Selim Amallah’s introduction prompted a change of shape after 20 minutes.

It was the latest unwelcome sight for Morocco, after West Ham’s £30m defensive signing Nayef Aguerd withdrew with a hamstring issue during the warm-up.

Boufal was booked and his teammates dismayed as referee Cesar Arturo Ramos Palazuelos deemed he lost a 50-50 challenge with Hernandez in the box. It should’ve been a penalty.

Aurelien Tchouameni’s lung-busting midfield run fed Kylian Mbappe, who beat club teammate Achraf Hakimi to the ball but his effort was partially cleared – only to Giroud, firing wide from close-range. In-front of goal, this was the wrong moment for an off-day for the frontman. 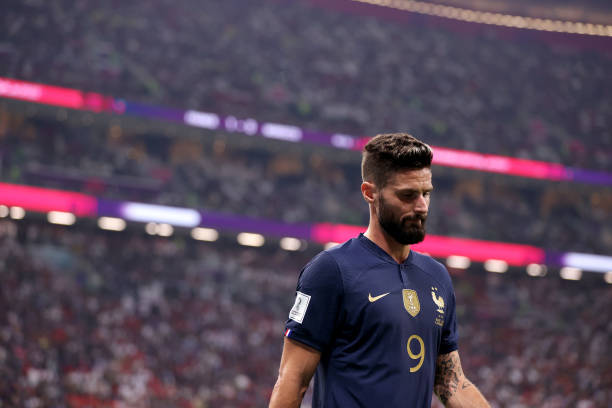 Giroud snatched at chances, where more composure would’ve seen him get on the scorehset

Jawad El Yamiq, whose overeagerness saw him miss a crucial challenge during the build-up to France’s opener, made a perfect sliding tackle to deny Griezmann on the byline in the area. From the subsequent corner, the Atletico forward’s low ball was side-footed wide by Raphael Varane.

Speaking of sliding challenges, Konate had to time his tackle well as Hakimi charged down the byline. From the resulting set-piece, El Yamiq’s speculative bicycle kick cannoned off the upright.

In first-half stoppage-time, Ziyech’s free-kick routine – a disguised chipped ball to an unmarked Amallah – narrowly evaded him and trickled out of play.

The game was bubbling up nicely, as the whistle blew for half-time. After the restart, Morocco were riding an increasing wave of momentum as their attempts to equalise intensified.

Konate and Griezmann made last-ditch interceptions as Walid Regragui’s side continued to interchange successfully down the right. Hakimi, who fended off Mbappe as he looked to latch onto Griezmann’s through ball, was a mainstay in their build-up high up the pitch. 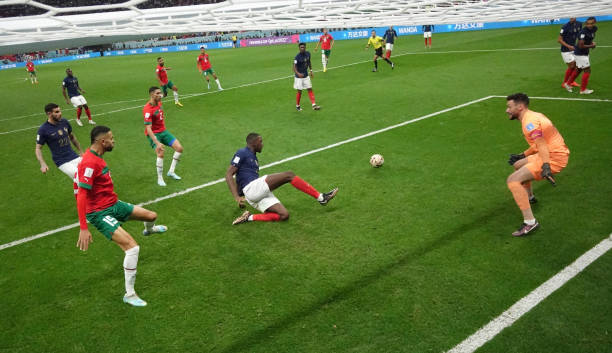 As time wore on, the score remained 1-0 and finely poised. Boufal’s solo runs, Ziyech’s teasing deliveries, the relentless pressure. France were up against the ropes.

Didier Deschamps made a change, on came Marcus Thuram for Giroud as Mbappe shifted into the middle. Thuram won fouls, looked to play the right pass but headed wide from Griezmann’s well-struck freekick, as their slender margin remained. He was key in their second goal.

The Gladbach forward teed up an overlapping Fofana, who blazed into the side netting.

Morocco sub Abderrazak Hamdallah should’ve shot after dispossessing Tchouameni in midfield, as their fans cranked up the noise in anticipation at what was to come. France were still shaky.

Not to worry, as Fofana would make amends for his wasteful effort and rather quickly too. The 23-year-old burst through midfield, gleefully marauding with the ball at his feet, after El Yamiq’s careless pass saw possession relinquished. Again the Real Valladolid centre-back was culpable.

Fofana laid off Mbappe, who exchanged passes with Thuram, before jinking inside the area past three defenders.

The committee will analyse and debate whether Mbappe should be credited with an assist, as his deflected pass fed Muani at the near post – he couldn’t miss with his first touch of the night.

A dagger in the Morocco hearts, having worked tirelessly to score an equaliser, they were punished for lacking defensive discipline in what was an uncomfortably open game.