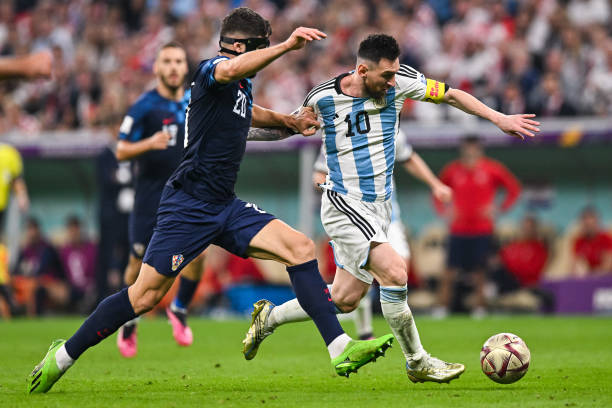 Lionel Messi and his Argentina teammates will play defending champions France or African record-breakers Morocco on Sunday afternoon in the World Cup Final after ultimately easing to a 3-0 win over Croatia in the tournament’s first semi-final. Turns out, Nicolas Tagliafico’s pre-match comments on the PSG man’s presence aged well here. Will they again this weekend? 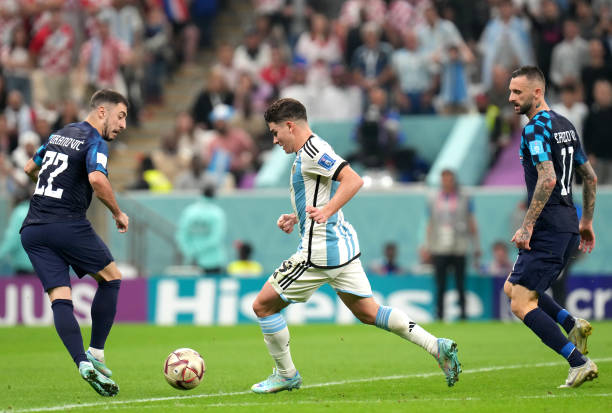 Alvarez (centre) during the build-up to his first goal, and Argentina’s second, against Croatia

“He is the best player in the world, dangerous and has quality, technique, put in a high-level performance. It was the true Messi we expected to see,” he said post-match. Those are the post-match words of Croatia manager Zlatko Dalic, who witnessed the magic unfold as we all did.

Sometimes, the story writes itself. Lionel Messi, not for the first time nor the last in his illustrious career, propelling teammates forward. Nicolas Tagliafico was right about presence, wasn’t he?

In a game where he repeatedly clutched his left hamstring in discomfort, you couldn’t help but question the logic behind Lionel Scaloni’s decision to keep him on – risking further aggravation – with this semi-final result beyond doubt. After all, he’s got a World Cup final to prepare for.

He slammed home the first from twelve yards out against Dominik Livakovic, an inspired goalkeeper whose influential displays have attracted admiring glances from European sides.

Argentina headed clear from a corner and Messi’s touch proved decisive in the build-up, flicking it past a trailing Marcelo Brozovic as the Inter midfielder scampered back trying to recover.

Alvarez accelerated away on an an excellent run, helped in part by some feeble defending and half-hearted clearances, but the 22-year-old needed to stay composed as his eyes widened and the goal neared. He did just that, yet there was more magic to come.

If fortuitous is a handy-but-harsh way to describe Alvarez’s first goal, his second of the evening with 20 minutes to play was supreme. Made again by the talisman, Messi twisted and turned Josko Gvardiol – the tournament’s best defender – inside out before cutting back for Julian.

It’s easy to forget that Gvardiol, for all his youthful enthusiasm and machismo, is still only 20. The clips will live long in the memory and burn him no doubt, but Josko has plenty of time to learn.

The margin for error in said sequence was small and yet, Messi made it look easy:

Messi should’ve had a second himself, but Livakovic was equal to his effort ten minutes prior.

Atletico Madrid’s Rodrigo de Paul laid him off, before racing down the opposite channel in support, but the 35-year-old ran at the Croatian defenders. He shrugged off Gvardiol baring down on him – foreshadowing, perhaps – cut back inside and played a one-two with Fernandez.

Rather than shoot across goal, the high-percentage decision, he opted to strike at the near post as pressure on his heels intensified. It rather typified a tiring evening’s work for Zlatko Dalic’s defenders, none of whom covered themselves in glory but were being repeatedly worn out.

If it wasn’t from Messi’s mazy dribbling and awareness, Alvarez’s hard running was a nuisance.

Argentina’s press out of possession was overwhelming, de Paul and Alexis MacAllister full of running while Fernandez and Leandro Paredes pulled the strings in midfield. Paulo Dybala made his first tournament appearance, while Juan Foyth had a go getting at their backline late on too.

“I try not to be too emotional, it is very difficult to put this [achievement] into words. This is what I had always dreamed as an Argentinean.

Everyone would act the way I do when you represent your country, but it is impossible not to do what my players do. It is thrilling, emotional.

Our people were supporting us – we could feel their support – that’s something unforgettable. We are making history and this is a reason to be happy.”

This defeat will sting for Croatia, who started purposefully but didn’t test Emiliano Martinez until it was too late. Ivan Perisic came close, Mateo Kovacic was dependable behind him in midfield while captain Luka Modric acquitted himself well before being replaced in the last 10 minutes. 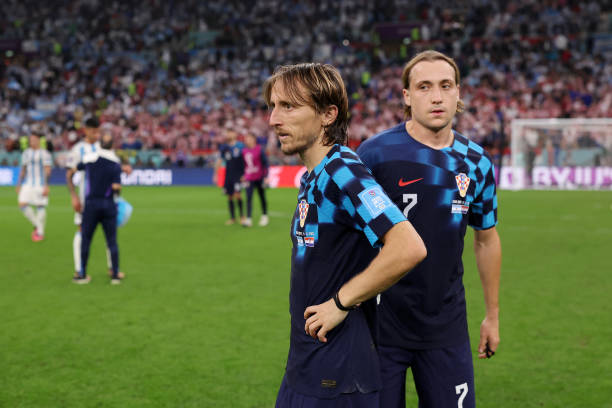 Changing of the guard: Midfield duo Modric and Majer (no. 7) pictured after the full-time whistle

It’s not all over for the playmaker though, with Euro 2024 already on the horizon, but there’s no better apprenticeship than training alongside and watching Modric for the likes of Rennes’ Lovro Majer and Salzburg youngster Luka Sucic among others as the new generation takes over.