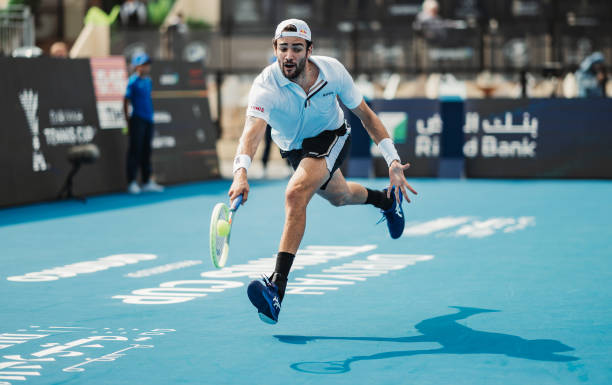 After surpassing his previous best, earning a semi-final finish at this year’s Australian Open, 2021 Wimbledon runner-up Matteo Berrettini has spoken about how he plans to utilise the upcoming United Cup as an opportunity to build towards an even better run in mid-January at Melbourne Park – where his deficiencies were laid bare by Rafael Nadal 11 months ago. 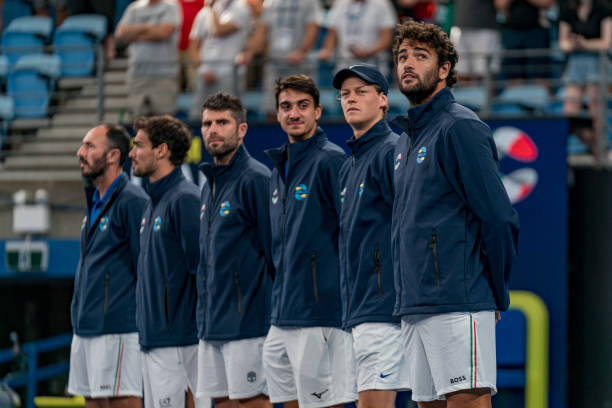 Berrettini (far right) represented team Italy at the ATP Cup to start 2022, and he’ll do the same here

Matteo Berrettini headlines the Italian team as they take part in a mixed event – the United Cup – which will be spread over three cities and feature 18 countries in Australia starting early Friday.

The world no. 16, previously ranked as high as #6, will be itching to begin the new campaign in fine form, after an injury-plagued end that marred his high standards over the past few months.

After being blown off the court by an inspired Casper Ruud in the US Open quarter-finals on September 6, the 26-year-old took a week off before acquitting himself well at the Davis Cup and Laver Cup tournaments in Spain and London respectively later that month.

However, he ended his season with defeats by Roberto Carballes Baena in Florence and upcoming teammate Lorenzo Musetti in Naples, before withdrawing from Vienna and the Paris Masters shortly afterwards with a troublesome left foot injury sustained against Musetti.

It was the latest in a list of unwanted issues this year for Berrettini, who was unable to back up his Wimbledon result from last summer after testing positive for COVID-19 and withdrawing just hours before his first-round match against eventual quarter-finalist Cristian Garin.

Keen to start the new year without injury hurting his progress, the Italians will play their group stage matches against Brazil and Norway in Brisbane.

Should they win the group, or finish as the fourth highest-scoring team across the entire competition, they’ll progress into the knockout stages at Sydney’s Ken Rosewall Arena.

“I love to play in Australia, like the conditions, crowd and the energy. I’ve always had good memories here, [Italy] also had a good run in the ATP Cup, reaching the final [in 2021], so it’s nice to be here. Hopefully I build up a lot of confidence from this event to have a long run in the Australian Open aswell.”

Finding his way back to the top and reaching new heights 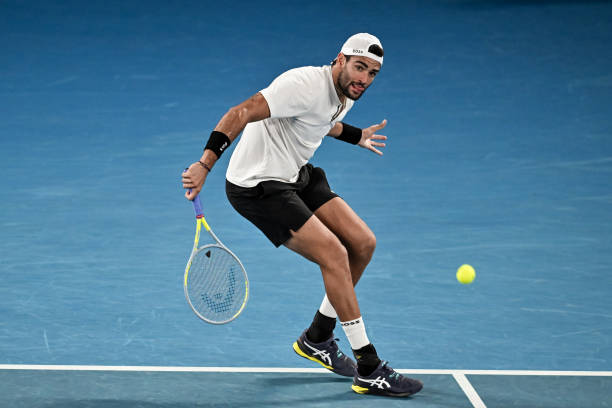 Reigning champion Rafael Nadal weathered a third set storm to beat him during this year’s semi-final, frequently attacking the Berrettini backhand – a well-known weakness in his arsenal.

Novak Djokovic, a nine-time Australian Open winner, was seen arriving in Adelaide yesterday and will be welcomed back to the nation after the deportion debacle earlier this year.

Berrettini believes he can break the Djokovic-Nadal duopoly, and will have taken inspiraton from Spanish teenager – new world no. 1 Carlos Alcaraz’s recent triumph at Flushing Meadows.

“The more you play against them, the more you learn how to beat them. When I played Novak at Wimbledon, I think it was his 30th Slam [final], it was my first. Obviously he’s a great player as well, so it wasn’t an easy task. I felt, and I feel, super honoured to play against them – hopefully next time I win.

I remember playing Alcaraz at the beginning of the year, felt he is a great player with great potential. I didn’t expect him to go up that fast but he deserved it, so good for him. Novak and Rafa are always going to be there.

Age-wise I’m in the middle of them, but I feel that I can get back to that level. Obviously the goal is to get back in the top 10 and see from there. Last year, before the hand surgery I was at my best ranking – six in the world – I know that’s my level and I can get back there. Why not even better?

Berrettini is scheduled to play his first United Cup match in the early hours on Friday (from midnight BST) against Brazil’s world no. 71 Thiago Monteiro.

In preparation for the Australian Open, I’ll be covering the United Cup on moandsports.com. So stay tuned for that coverage between Friday 30th December and January 7, 2023.