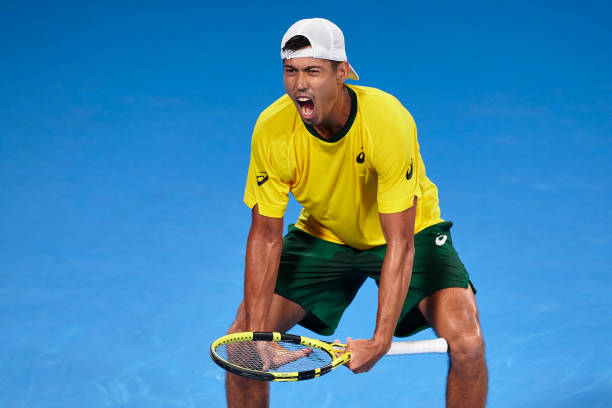 There were straight-set victories for Matteo Berrettini, Maria Sakkari and Stan Wawrinka among others but the big story came in the evening as home favourite Jason Kubler recovered from a 5-0 second set deficit to overwhelm world no. 27 Dan Evans and secure Australia’s first-ever United Cup triumph, on an eventful second day of group action at the tournament. 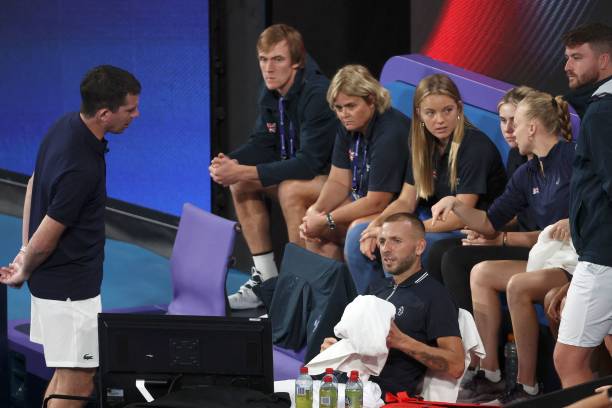 After straight-set victories for Katie Swan and Cameron Norrie yesterday, Great Britain headed into today with a 2-0 lead over home nation Australia in their United Cup group encounter.

Maddison Inglis’ untimely unforced errors in big moments cost her during a competitive defeat against Harriet Dart, and suddenly Lleyton Hewitt’s squad were looking to save face.

20 minutes later, on came Jason Kubler with an opportunity to disrupt the GB rhythm against a familiar foe: he beat Evans quite convincingly during the opening round at Wimbledon, en route to a career-best fourth-round Grand Slam finish at SW19 this past summer.

He started better and took an early lead on this occasion against an unpredictable Evans, but all the headlines will rightly focus on his miraculous recovery after going 5-0 down to set two.

The 29-year-old started well and fended off early danger after saving a break point at 2-2.

Evans then faced a similar situation, but Kubler’s aggression and shot selection proved key in earning the contest’s first break.

From there, he largely dictated proceedings despite some engaging rallies and competitive points being played. That proved Evans’ springboard to success early in set two, as he came out firing with renewed energy and snatched a double break advantage without warning. 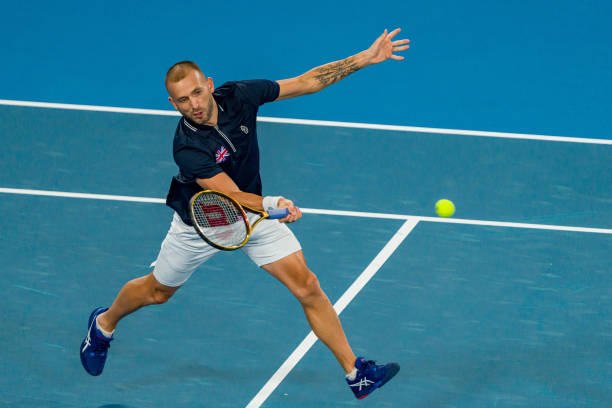 Kubler regularly pulled Evans forward in set one, before Dan upped his topspin forehand in the 2nd

Goading the Australian bench, he was fired up and playing tennis on his terms as the Ken Rosewall Arena – loud and proud of their home favourite earlier – were stunned into silence as they braced themselves for a deciding set.

At the changeover, team captain Lleyton Hewitt stressed a need for Kubler to keep Evans guessing and importantly create doubt in his mind by winning the next two games.

He did just that, and you could sense the tide turning if Evans didn’t silence the crowd by sealing set two with his next service game. Kubler kept his foot on the accelerator, nothing to lose, and 5-2 was soon 5-5. How?

Buoyed by a boisterous crowd powering him further, he stopped worrying about Evans tactically outsmarting him and instead focused on taking care of the little details.

His serving – 11 total aces, 67% first serve in set two – was a weapon the Brit had no answers for, and he could play freely. His forehand was ferocious, he knew when to approach the net and produce deft rally-killing shots. 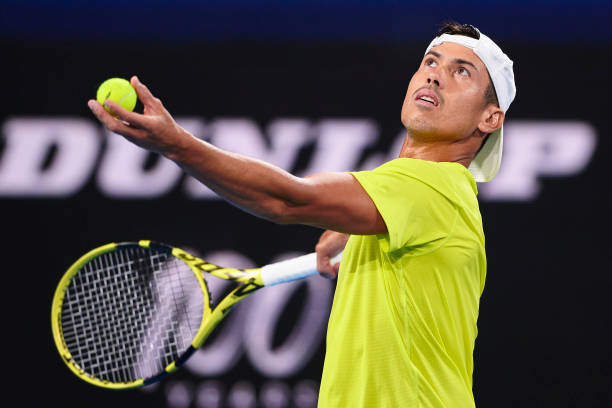 Evans was stumped, and physically flagging too. He should’ve been midway through the third set at this point, and knew it. Instead, the exchanges were extended and his handle on proceedings had slipped back into Kubler’s favour.

Despite going down 2-0 in the breaker, Hewitt’s words of affirmation – suggesting points were on Kubler’s racquet, but for better execution – it proved true. He won five straight points as the crowd willed him towards the finish line, but Evans pulled one back and there was work to do.

That he did, finishing with aplomb on match point: unleashing a fearsome forehand up-the-line winner after holding his nerve and keeping Evans pinned back on his second serve. Great Britain were 3-2 winners overall in their group fixture, but Australia provided an assertive reply to finish. 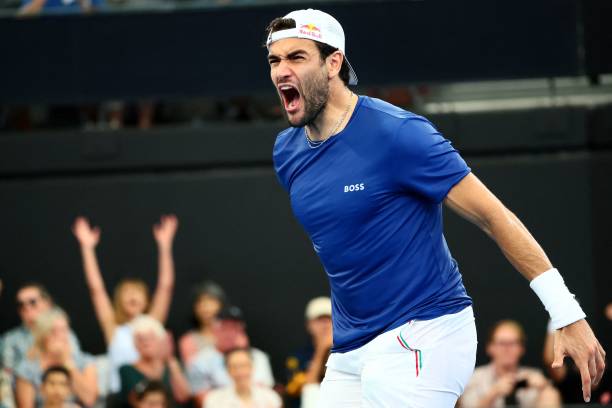 Berrettini celebrates his straight-sets win over Monteiro, who hung in there late during a nervy finish

2021 Wimbledon runner-up Matteo Berrettini used his serve to good measure, recording 16 aces en route to a 6-4, 7-6 (9-7) victory against Brazil’s Thiago Monteiro – although much like Kubler, the finish wasn’t as straightforward as the world no. 15 would’ve hoped for.

Both held serve with relative ease, much like set one, and soon enough they were deadlocked long enough to force a breaker.

Berrettini needed to save two set points on the Monteiro serve – easier said than done – but he did so and after squandering his first, he eventually got the job done on his second match point during a day where Italy narrowly pipped Brazil 3-2 overall in their first group game.

2022 US Open semi-finalist Frances Tiafoe was leading 6-3, 2-4 against Czech Republic’s Tomas Machac, before the 22-year-old retired after sustaining an ankle injury – turning it mid-rally. After consulting with the physio and his team, it was clear he couldn’t continue.

Maria Sakkari was a 6-3, 6-2 victor against Bulgaria’s Viktoriya Tomova after a 53-minute first set which didn’t exactly reflect the comfortable-looking scoreline. The world no. 6 had two break opportunities to go 2-0 up, lost her serve in the next game then broke straight back afterwards.

She then had to fend off a break point to hold at 4-3, before breaking to love for a 5-3 advantage and it was largely plain sailing from there – gladly seizing the initiative against her agemate.

Faultless behind her first serve in set two (11/11 pts won), she broke immediately and the writing was quickly on the wall for Tomova, who lost their previous meeting – R2 at Wimbledon in June.

A few hours later, Sakkari returned and won 6-4 6-4 in a mixed doubles matchup alongside Stefanos Tsitsipas against the young Bulgarian pair of Gergana Topalova and Adrian Andreev.

Stan Wawrinka was made to work hard for it, but played the bigger points better and eventually outlasted hard-hitting Kazakh Alexander Bublik 6-3, 7-6 (7-3) in just over 90 minutes as Switzerland became the first nation to clean sweep their opponent 5-0 in the tournament.

Also achieving that feat was France shortly afterwards, as WTA Finals champion Caroline Garcia went 2-0 today – just like Sakkari, who she beat in the Fort Worth semi-finals last month. 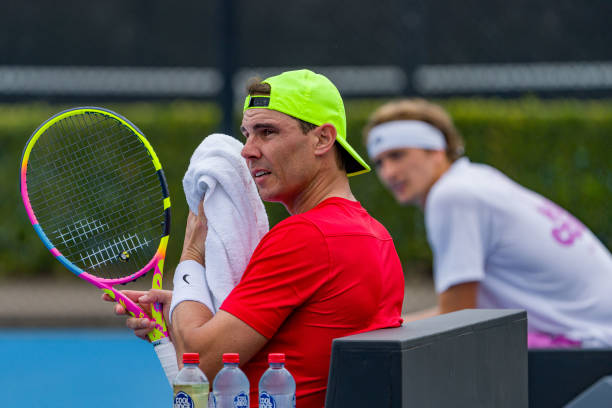 Germany vs Czech Republic
Brazil vs Norway
Belgium vs. Bulgaria
Poland vs Kazakhstan
Spain vs Great Britain
Croatia vs Argentina