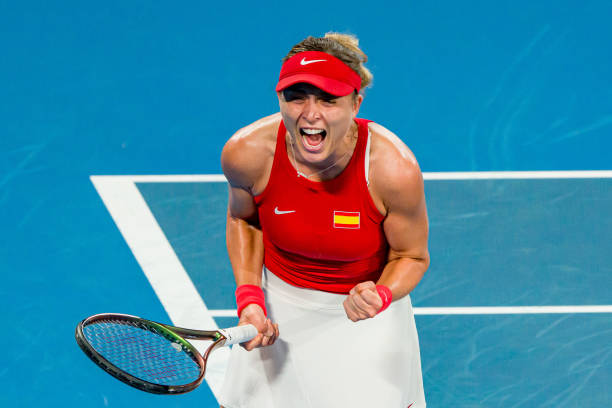 Casper Ruud earned a solitary win for Norway while Poland’s Hubert Hurkacz finished with a flourish. Paula Badosa didn’t have it all her own way, spluttering a whopping 12 double-faults before suffering with cramp, yet eventually recovered from the brink to overpower Britain’s Harriet Dart in an exhausting three-hour encounter to keep Spain’s qualification hopes alive. 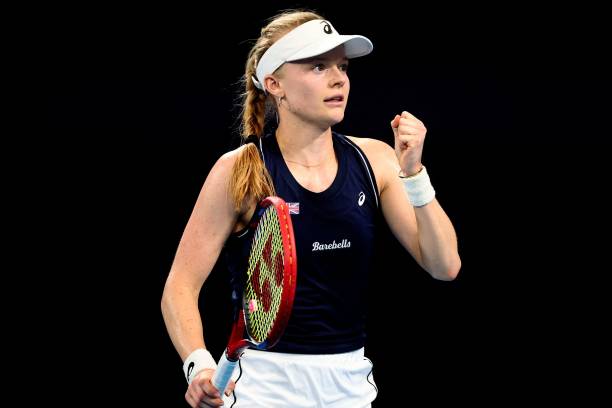 Dart, who beat Badosa at the Billie Jean King Cup in November, played well but couldn’t close it out

Paula Badosa was physically flagging, seeming to question whether the effort was worth it. Her team persisted with positive affirmations and after more medical treatment, the 25-year-old didn’t just hang in the contest, but danced with danger and emerged stronger for the battle.

Before any of the pickle juice talk, Great Britain team captain Tim Henman visibly watching Badosa’s body language between points like a hawk or the ill-timed time violation as the Spaniard’s poor serving persisted, you must start the beginning of an excellent recovery win.

Made even better that it was in the same team setting which Harriet Dart had outfoxed her in Glasgow (6-3, 6-4), seven weeks earlier at the Billie Jean King Cup. Her win means Spain, at the time of writing, still have a chance to secure their passage out of the United Cup group stage.

So, the start. Dart excellently hustled her way into earning the match’s first break point, before watching gratefully as a forehand error down the other end gave the Brit a 3-2 first set lead.

Depth and controlled aggression ended Badosa’s hopes of breaking back in the next game, amplified by a backhand up-the-line winner to finish a long rally packed with excellent ball-striking by both. 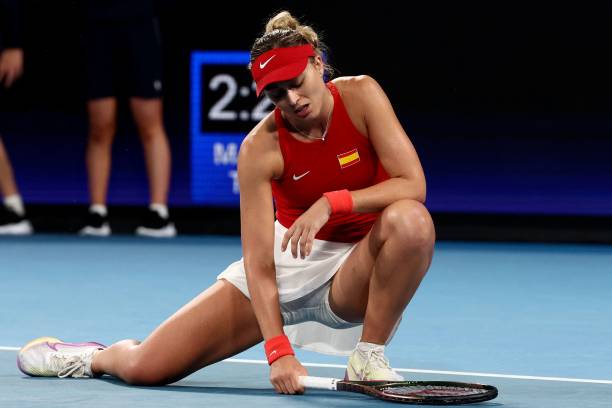 Badosa didn’t have it all her own way and made errors aplenty, but that made for a better encounter

Badosa appeared to have serving yips and was hampered by a persistently suspect ball toss, before finding herself 5-2 down at one stage. However, the world no. 13 responded well and kept pressure on the 26-year-old with faster groundstrokes and generally began playing better tennis.

As hard as Dart worked to prolong their rally exchanges, doubt crept into her mind. She hadn’t done much wrong and yet the scoreline swung in the Spaniard’s favour.

Badosa was guilty of overplaying her groundstrokes upon occasion but also painting the lines with winners in other instances and suddenly Dart served to stay in the set.

A forehand smash miss and double-fault gifted Badosa set point, but she looped a forehand long on a Dart second serve. Back-and-forth they went in more rallies, Dart saving another with an inch-perfect forehand winner into the corner, and into a tiebreak they went.

After a prior warning, Badosa lost her first serve after another time violation – then lost the subsequent point. She broke back immediately to level at 3-3, then again to make it 5-5, but Dart was in the ascendancy. 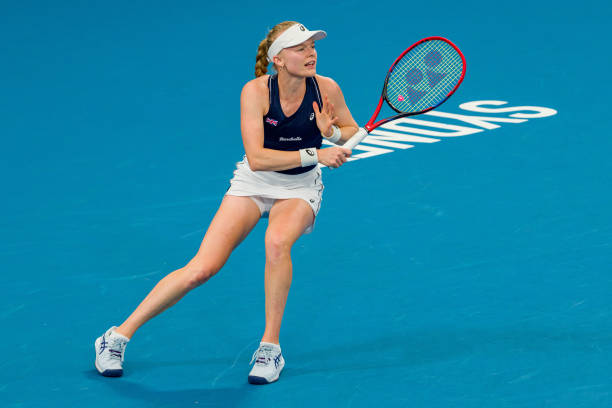 Dart kept prolonging points with tough shot defence, while her sliced return was a useful weapon too

Dart should’ve sealed set one on her third. Instead, Badosa – pinned behind the baseline – hit two net cords and benefited from good luck, Henman stressed to his charge. It wouldn’t last.

She swung a crosscourt forehand narrowly wide, and on the fourth attempt, Dart finally pulled away to take it 8-6.

Badosa started set two intently, and earned an early break for her intensity to restore parity once more. As quickly as it arrived, she was under duress and fended off three break points in the match’s longest game yet.

Again questions were asked of her flagging serve, and things only worsened as she motioned for the trainer after landing awkwardly after a forward foray.

Replays showed she jarred her left calf on the landing, and consciously tried to shorten points to manage a cramp issue – evidenced by the physio massaging both her legs at the changeover. 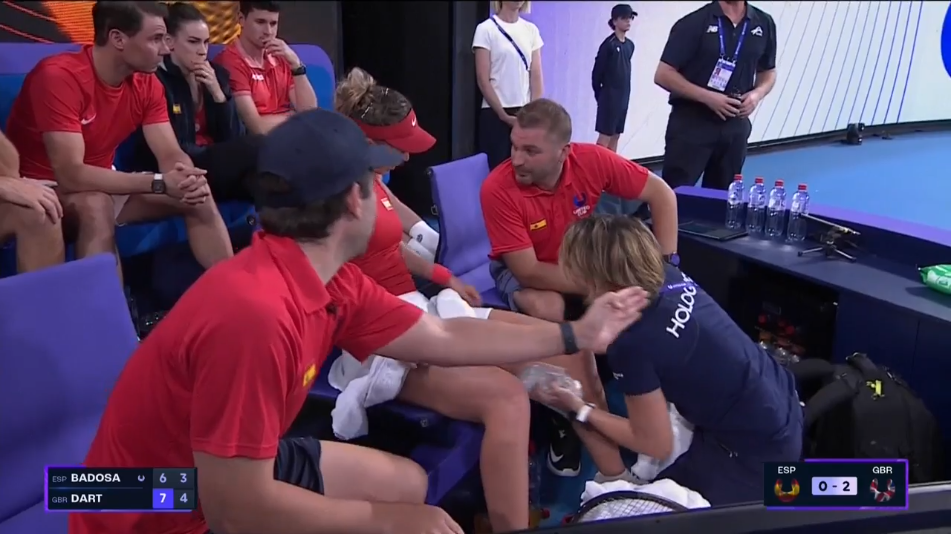 Ice towels, massage and pickle juice: Badosa had it all, to overcome her cramping problem mid-match

The body language coming from team Spain wasn’t reassuring and soon enough, Dart levelled the scoring at 3-3 – breaking back after forcing her into difficult shots on the stretch. Badosa’s hampered movement was clear as she was being pulled forward to the net, and soon it was 4-3.

After more treatment and some pickle juice at the next changeover, Badosa had a quick service hold and was 30-0 up on the Dart serve. Her ball-striking, unleashing forehand winners into different corners – 140km/h and more – opened up two break point chances. Only needed one.

They exchanged breaks after that, with Dart experiencing some deja vu: having to save a set point. She did so after Badosa – having recorded a grisly 10 double-faults by this point – went big on her second serve and scooped a forehand wide, with Dart pinned behind the baseline.

Aggressive towards the net in forcing another error, into another breaker they went. Successive unforced errors and a few assertive smashes saw Dart trailing 5-0 at one stage, yet the big deficit allowed her to play freely. Given her court coverage, that was a dangerous proposition to arrest.

A drop shot and line-kissing winner helped reduce Badosa’s advantage to one point, and she still had to serve. 5-4 turned to 6-5, before an untimely double-fault from the Brit handed Badosa the set. After a 77-minute first set and a 76-minute second, they were headed for a decider.

Just like set two, Badosa began better and was again up an early break – this time through Dart’s deficiencies rather than anything special down the other end. She couldn’t find a first serve and was duly punished, as Badosa’s level increased just like the scoreline in the Spaniard’s direction.

A series of powerful forehands saw Badosa control rally exchanges in Dart’s next service game, and despite saving one break point, Harriet couldn’t stop the bleeding – now she was down 5-1.

As the clock ticked past the three-hour mark, Badosa mixed in a slice shot and continued to pull Dart from side-to-side – a tactic team Great Britain advised Dart to execute herself an hour earlier – en route to earning two match points.

Dart’s 38th unforced error ended an tiring tussle with a whimper, but she can take heart from a fearless display that could’ve easily gone her way. More assertive big-point execution was needed at 4-3 in set two, but she needed to finish Badosa off before she built a head of steam. 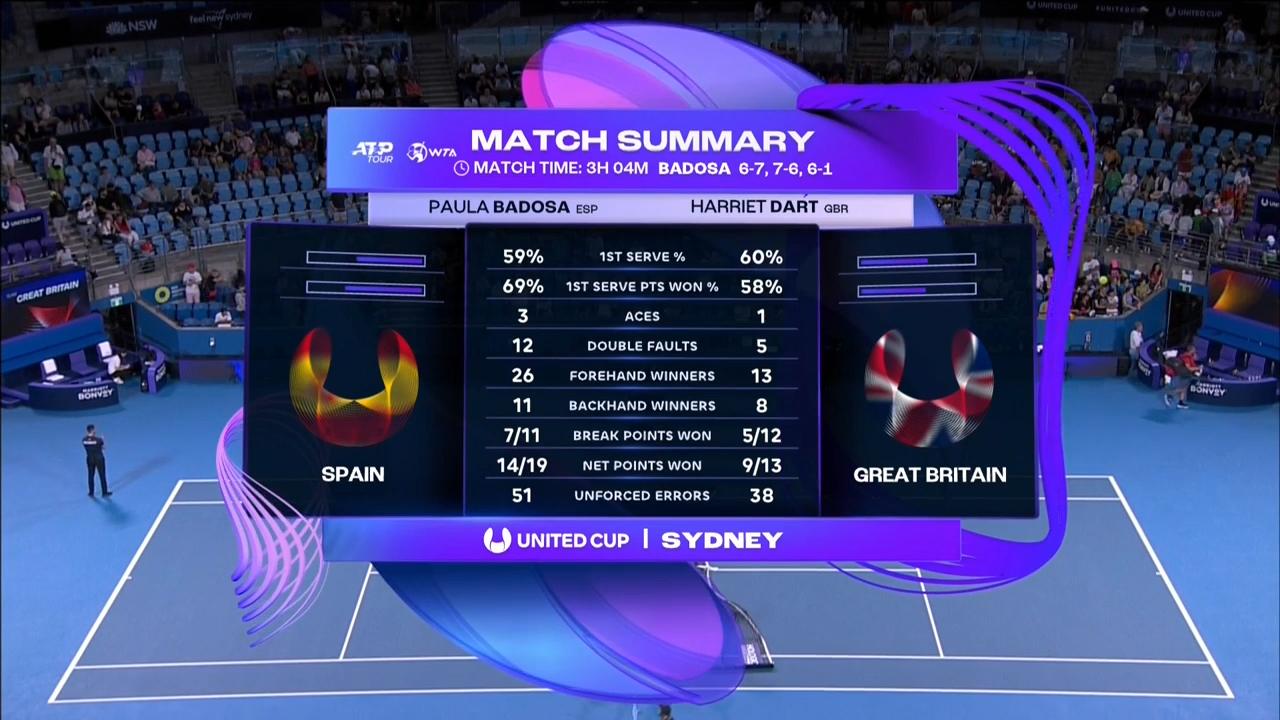 Dart, ranked as high as world no. 84, sits just inside the top 100 at present and finished 2022 with a series of impressive wins over Daria Kasatkina and Ajla Tomljanovic among others.

The level is clearly there to match higher-ranked players and beat them upon occasion, but maintaining consistency is the challenge – a problem felt across British tennis. This defeat will sting in the immediate aftermath, though plenty of positives can be taken from Dart’s display. 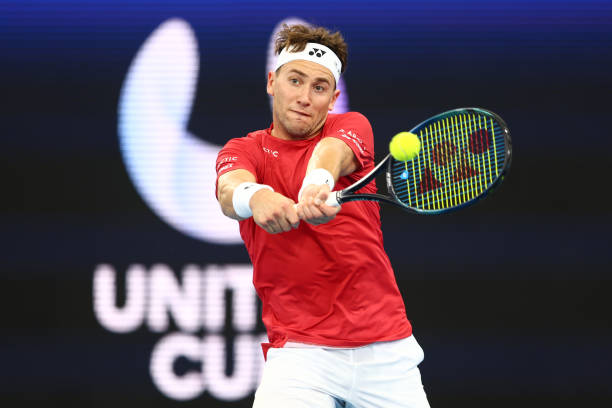 US Open runner-up Casper Ruud – who finished his season as the ATP Tour Finals runner-up in late November – returned to competitive action with a straightforward victory (6-3, 6-2) win over Thiago Monteiro but his compatriots lost 4-1 in their opening group game against Brazil.

Ruud served eight aces and responded well to the threat of potential adversity, breaking straight back on the two occasions (once in each set) he did lose his serve. Up next, he’ll play a familiar face in Matteo Berrettini on Tuesday – the 24-year-old leads their H2H 4-2, including the last two.

After being stunned by the 21-year-old in singles yesterday, Olympic champion Alexander Zverev exacted partial revenge on Jiri Lehecka after teaming up with Laura Siegemund to good effect – they ran out 6-4, 7-6 (7-1) winners over him and partner Marie Bouzkova.

Their compatriot Oscar Otte was made to work for it early on, but eventually his tour-level experience and nous proved too much for Czech youngster Dalibor Svrcina – 7-6 (7-1), 6-2.

Hubert Hurkacz’s super serving helped him finish without a hitch during a hard-fought three-set win over Alexander Bublik – 7-6 (10-8), 4-6, 6-3 – before the 25-year-old returned two hours later alongside world no. 1 Iga Swiatek, as they proved a handy doubles pair for Poland.

Keeping in theme with Swiatek’s storming tendencies on the WTA tour, they needed just 63 minutes to dismiss Kazakhstani pair Grigoriy Lomakin and Zhibek Kulambayeva – winning 4-1 overall over the tie. Their next assignment? Switzerland tomorrow, who claimed a clean sweep… 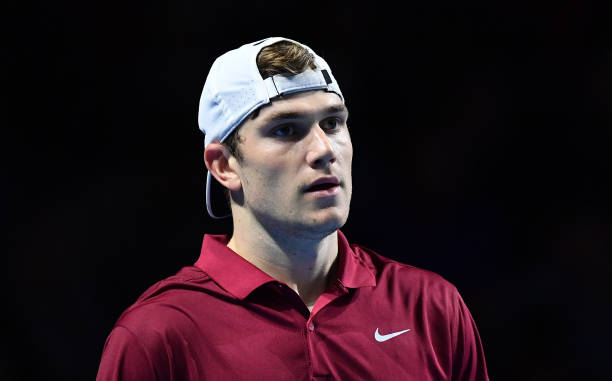 Jack Draper, here during the Battle of the Brits, returns against South Korea’s Soonwoo Kwon

The headline singles matches are subject to change, but currently include Taylor Fritz vs. Alexander Zverev, Iga Swiatek vs Belinda Bencic and Rafael Nadal vs. Alex de Minaur.

What other tennis is on?

ATP
Adelaide 1 main draw continues, with Holger Rune, Felix Auger-Aliassime and Jack Draper among the notable names in first-round action overnight. If you read this far yesterday, Rinky Hijikata progressed beyond his compatriot and faces… Denis Shapovalov on Wednesday.
Pune proper begins, an all-Spanish clash – Roberto Carballes Baena vs. Bernabe Zapata Miralles separated by two ranking places – and Molcan-Djere among the matchups to begin the week

WTA
Adelaide 1, a 500 event, continues. Bianca Andreescu recovered from an improbable scoreline to overcome Garbine Muguruza and more besides. Up next? Elena Rybakina vs. Danielle Collins and Daria Kasatkina against teenage qualifier Linda Noskova – who certainly has upset potential…
Auckland has an excellent draw. The Fruhvirtova sisters (Linda and Brenda) are drawn against the 2021 US Open champion and runner-up…. while Venus Williams returns tomorrow too.