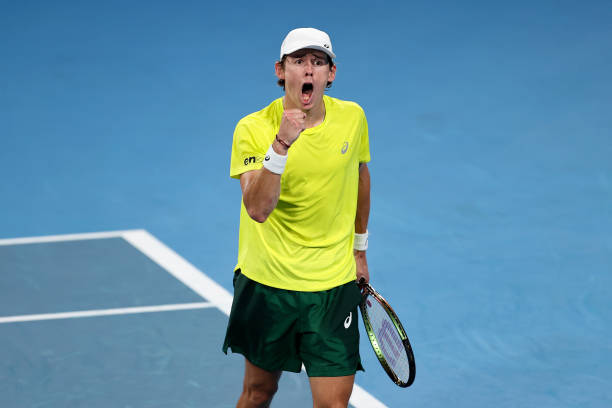 Rafael Nadal’s slow start to the 2023 season continued as home favourite Alex de Minaur became the latest to mount a stirring comeback against the reigning Australian Open champion in the United Cup, while Alexei Popyrin and Linda Noskova were just a few with surprise victories elsewhere as the main draw of other tournaments continued to unfold today. 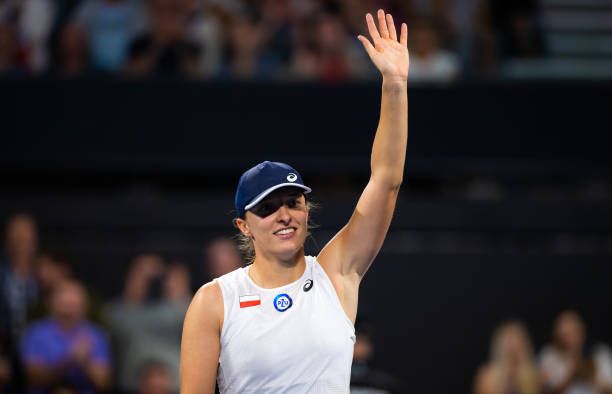 Swiatek celebrates after her straight-sets win over Bencic, which was far from straightforward

Taylor Fritz made quick work of a returning Alexander Zverev, with a 6-1, 6-4 win over the Olympic champion to help US take an early lead vs. Germany in their team group fixture.

Lorenzo Musetti was pushed early, seeing five set points come and go – and saving one himself – before eventually overcoming Norway’s Viktor Durasovic 7-6 (9-7), 6-3 before Stefanos Tsitsipas served 12 aces for a second consecutive match during a 6-3, 6-2 win over Belgium’s David Goffin.

Rafael Nadal started well, yet was anything but comfortable as Alex de Minaur rallied from a set and early break down to overwhelm the reigning Australian Open champion 3-6, 6-1, 7-5.

That result means it’s the first time the legendary Spaniard has begun a season 0-2, a statistic exacerbated by his red-hot form to start 2022 – remember who ended that at Indian Wells?

de Minaur, much like Cam Norrie over the weekend, matched him in their rally exchanges, defended well and the latter came to the fore with the tie on the line at 5-5 in the decider.

His return on the stretch to repel a fast serve out wide was worthy of winning the point alone, though Nadal scooped a forehand long – not for the first time – to give the home favourite a chance to serve it out. That he did, with no issues.

“I couldn’t be happier that I got my first win over Rafa on this court, my favourite in the entire world, thanks very much guys.

I knew it’d be a battle, he’s a hell of a competitor and what he’s done for this sport… I’m honoured and it’s a dream come true.

I tried to think as little as possible, see ball hit ball, served the best game all match [at the end], listen to Lleyton but just play and not think.”

Even after the understandable euphoria which that career highlight would’ve brought – especially at home – the score reads Spain 1-1 Australia after Day 1’s play, as Nuria Parrizas-Diaz won 6-1, 6-3 against Maddison Inglis in the day’s penultimate group stage encounter.

Marc-Andrea Huesler is now 2-0 in United Cup singles play, as he similarly ensured Switzerland go into Day 2 with fate still in their hands after a 6-3, 6-2 win over Poland’s Daniel Michalski.

That came after world no. 1 Iga Swiatek played the big points better and executed with steely clarity in the subsequent tiebreak to successfuly fend off an improved Belinda Bencic showing during set two of their latest encounter, eventually prevailing 6-3, 7-6 (7-3).

As for Monday’s final United Cup singles action… The tiebreaks themselves weren’t particularly close, but Borna Coric still had a job to do and held his nerve en route to a 7-6 (7-1), 7-6 (7-2) victory against France’s Arthur Rinderknech. 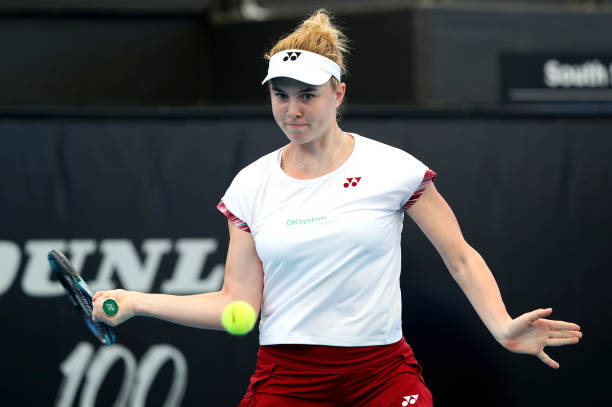 I called it yesterday – Linda Noskova has upset potential – and the teenage Czech, who beat a pair of highly-ranked Russians to qualify for the tournament, imposed herself with big groundstrokes during rally exchanges before knocking out Daria Kasatkina: 6-3, 6-7 (7-2), 6-3.

There was no such success for fellow qualifier Shelby Rogers, despite also winning set one, as she lost a tight second set tiebreak and was eventually overwhelmed (3-6, 7-6, 6-1) against Romania’s Irina-Camila Begu.

Since making the Wimbledon quarter-final back in early July, 21-year-old American talent Amanda Anisimova has struggled to establish much consistency and it’s continued here too.

Injuries have played a part, but she’s now 4-5 in five events since then and Anisimova was firmly second best against Russia’s Veronika Kudermetova – conceding seven aces to boot (6-3, 6-0).

Ukrainian qualifier Marta Kostyuk weathered a second set storm to overcome Australia’s own Jaimee Fourlis 6-1, 3-6, 6-4 in what would’ve been a rollercoaster of emotions for the 20-year-old.

Her reward? A tough task vs. Wimbledon champion Elena Rybakina, who needed three sets to beat Australian Open finalist Danielle Collins – coming back from a set down (5-7, 6-2, 6-3).

When you talk about tantalising women’s matchups already in 2023, try this one for size: Liudmila Samsonova vs. Aryna Sabalenka early on Wednesday, after the former’s similar come-from-behind win to douse Shuai Zhang’s hopes of a winning start to the new year (5-7, 6-3, 6-0). 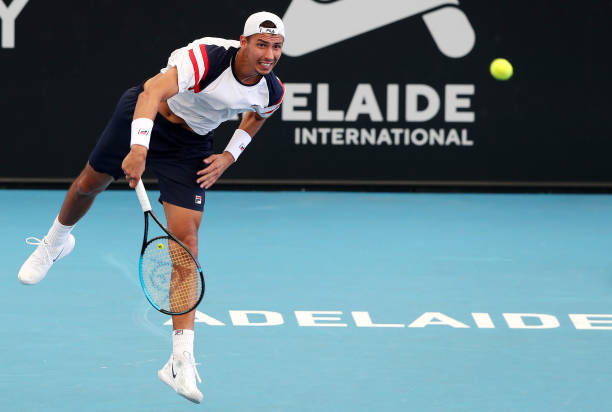 The 23-year-old qualifier served 11 aces, let his powerful forehand dictate rallies and after being on the receiving end of the Canadian’s deft touch at the net, was unafraid to match him in that regard precisely during moments where you could feel momentum was beginning to turn.

“It’s an unbelievable feeling, 2022 was a really tough season for me. This is my first main draw match of the year and to beat a player of his quality shows the offseason work is starting to pay off.

I told myself to stay positive [during negative moments], just trying to keep my head down, do my work and the hard work will pay off.

[With a new coach in October…] Got a big serve and forehand, but he’s helping me as I try to be more consistent, don’t wanna give away all my secrets.”

Serbia’s surging youngster Miomir Kecmanovic begun his season with a 6-4, 6-4 win over Australia’s Christopher O’Connell, a victory made slightly easier by an ability to break the 28-year-old’s serve in the first game of both sets.

Paris Masters champion Holger Rune ended an unforgettable 2022 on a high, but 2023 will be a compelling season as his profile intensifies – you’d expect the Danish teenager and his team to analyse intently after he lost from a set up (6-2, 4-6, 4-6) against Japan’s Yoshihito Nishioka. 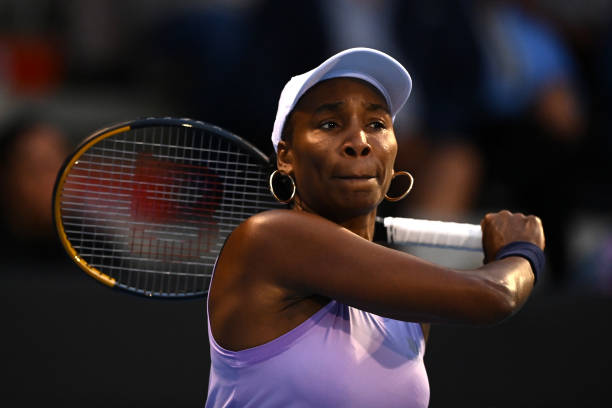 Venus, who was granted an Australian Open wildcard, was victorious for the first time in a while

After two contrasting meetings in 2019, China’s Lin Zhu and American veteran Madison Brengle faced off once more to kick off the new year. Zhu saved a match point en route to a gutsy three-set victory – 4-6, 7-6 (8-6), 6-4 in just under three hours. Her reward? Venus Williams.

You read that right. Venus began her season with a 7-6, 6-2 win over 21-year-old qualifier Katie Volynets – someone half her age, earning her first victory since R1 at Wimbledon last summer.

The dependable figure of Canada’s Rebecca Marino began her season with a hard-fought win over Hungary’s Dalma Galfi, one interrupted by rain at 4-4 in set two.

That wouldn’t have helped in terms of continuity, and she fearlessly saved a trio of consecutive set points on serve at 5-6 to earn a tiebreak.

The deciding set was tense and packed with pendulum swings, but Belgian qualifier Ysaline Bonaventure will face Marino next after recovering from a set down to beat American youngster Caty McNally – 5-7, 6-4, 6-4.

Speaking of youngsters, there was to be no fairytale story this time around for 15-year-old Czech talent Brenda Fruhvirtova against Marino’s compatriot and 2021 US Open finalist Leylah Fernandez – who needed little over an hour to beat her, dropping just two games.

Fernandez plays Austria’s Julia Grabher next, after her comeback win (5-7, 6-1, 6-2) over Czech Republic’s Tereza Martincova. The 26-year-old must serve better and avoid relinquishing free points against the 2021 US Open finalist, after racking up 10 double-faults on this occasion.

Marin Cilic [1] will start his tournament against Roberto Carballes Baena, after the Spaniard experienced a contrast of sets with compatriot Bernabes Zapata Miralles – winning 6-1, 7-5.

France’s Benjamin Bonzi faces Emil Ruusuvuori [3] in R2, Laslo Djere was a 6-2, 6-4 winner against Alex Molcan and Cecchinato-Griekspoor is set after their contrasting straight-set wins.