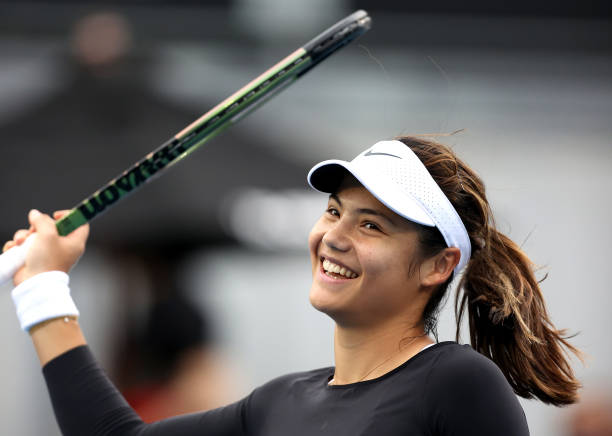 2021 US Open champion Emma Raducanu recovered from a set and early break down to prevail against a Czech teenage talent, after ATP Finals champion Novak Djokovic was tested in parts but his quality proved too much to handle as both players kicked off their respective 2023 seasons with contrasting victories in their first-round tournament matches. Also, the business end of the team-centric United Cup is hotting up, and there were a few surprises elsewhere… 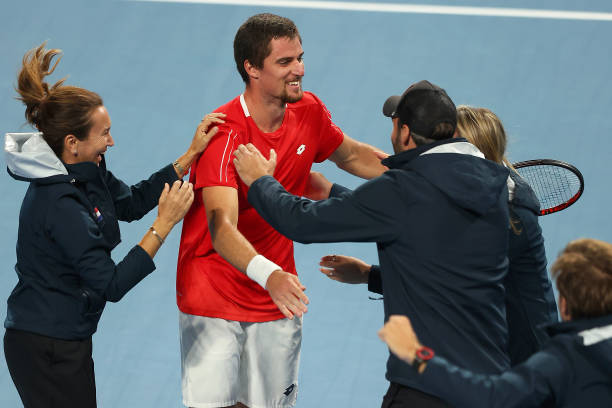 In a match of small margins, Matteo Berrettini exacted a little revenge against US Open runner-up Casper Ruud with a 6-4, 6-4 victory.

Ruud blitzed past what was an error-prone display by the Italian three months prior at Flushing Meadows, but this matchup was closely-contested and settled by two breaks.

Berrettini, who served 15 aces against Brazil’s Thiago Monteiro to start 2023 victorious, saved both break points he faced and converted the two he was afforded to eventually prevail.

Later on, Lucia Bronzetti was a 6-2, 7-5 winner against Ulrikke Eikeri before Rosatello-Musetti prevailed in doubles competition to secure a 5-0 sweep for the Italians.

They’ll play Poland in the Brisbane final, after Hubert Hurkacz beat Stan Wawrinka (7-6, 6-4) and Magda Linette recovered from a set down to topple Switzerland’s Jill Teichmann (5-7, 6-4, 6-1).

US Open semifinalist Frances Tiafoe lost just one point behind his first serve (29/30) and converted both his break points during a 7-5, 6-4 win over Germany’s Oscar Otte. The result completed a sweep for the United States… who play Great Britain in the Sydney final tomorrow.

Spain were already eliminated but playing for pride, though themselves and Australia hoped for a maiden group stage win at the other’s expense.

Jessica Bouzas Maneiro dropped just four games against Olivia Gadecki to give the Spaniards a 2-1 lead, before Jason Kubler fended off an Albert Ramos Vinolas second set fightback to outwork him in three: 6-3, 4-6, 6-3.

That meant the victor would be decided by doubles: Samantha Stosur and John Peers won again – like against team GB – 6-2, 6-3 against Maneiro and her partner David Vega Hernandez.

Greece secured their passage into the Perth final, after Maria Sakkari was a 6-1, 7-5 winner against Elise Mertens before Stefanos Sakellaridis rallied back from a set down to overwhelm Zizou Bergs 5-7, 6-1, 6-3.

Although qualification was already sealed, Sakkari later teamed up with Stefanos Tsitsipas again in doubles as they added gloss on Greece’s triumphant day – 6-3, 6-2 winners against veteran Kirsten Flipkens and the unheralded Michael Geerts in the final match rubber.

They’ll play Croatia next, after they edged past France – their fate was decided by a deciding set tiebreak. Vekic and Coric gave Croatia a 2-0 lead heading into the second day, but WTA Finals champion Caroline Garcia handed France a lifeline with a 7-6, 6-4 win over Petra Martic.

Adrian Mannarino vs. Borna Gojo was next, with both teams aware a Croatia victory would conclude the tie with a rubber still to play. Gojo led 7-6 (7-5) early on, but Mannarino levelled it at a set apiece (6-3), so into a final set they went.

Gojo served first to begin the breaker – directly in-front of the France team – and forced Mannarino into an error. He fired a forehand up-the-line winner to double said advantage, and though the 34-year-old kept it close after being down 5-1, he was fighting a losing battle.

The Croatia celebrations were heartwarming as Gojo closed the show with an authoritative smash, as Pat Cash on commentary suggested this was precisely the platform the 24-year-old needed to showcase his ability to produce against higher-ranked players more regularly.

As it stands, he’s scheduled to play 26-year-old Michail Pervolarakis on Wednesday morning (from 10am BST), the tie’s final singles action before Tsitsipas-Sakkari against Coric-Vekic. 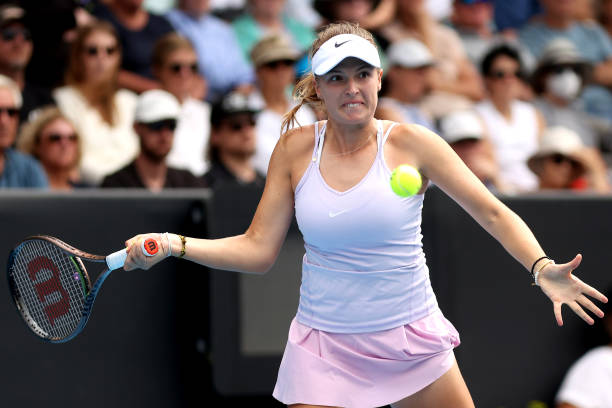 Fruhvirtova led early, but Raducanu roared back into the contest and earned a well-deserving victory

2021 US Open champion Emma Raducanu recovered from a set down to win a WTA tour-level match for the first time since Roland Garros last season, as her relentless pressure and decision-making was key to eventually overwhelm Czech teenage talent Linda Fruhvirtova: 4-6, 6-4, 6-2.

The last comeback victory was against Fruhvirtova’s compatriot and fellow teen Linda Noskova at last year’s French Open, though it often felt like Raducanu could rally from behind despite the 17-year-old’s skilled showing and a series of superb shots during a competitive affair here.

Deadlocked at 4-4 before an untimely rain delay, the British number one squandered a handful of break point opportunities – just like Linda before her – but there was a key difference.

Whereas Emma excelled under pressure to save them, she repeatedly overcooked forehands and let the Chennai champion off the hook in their baseline rallies. Fruhvirtova was energised by those missed chances and soon enough won four games in a row, to lead 6-4, 2-0.

But just as the commentator was praising her prodigious talent, Raducanu’s resistance intensified as she fired her way ahead in set two – more assured serving, better point construction and a flurry of forehand winners to boot.

Into a decider they eventually went and Raducanu had found her rhythm, peppering forehands with depth as Fruhvirtova was under pressure from ball one and was broken early.

Another rain delay halted play as the wind suddenly picked up, before the pair were back out once more and Raducanu held serve to give herself the same 2-0 scoreboard buffer.

Things were about to get better still, as Raducanu recovered from 0-40 down to eventually take the next game too. Fruhvirtova was spraying errors now and missing some makeable shots as the deficit increased, with momentum and initiative firmly with the Brit.

She avoided the bagel and saved three match points at 5-1 with some absorbing rallies, though Raducanu served well, rallying from 0-30 on serve to finish a hard-fought win.

“What a battle, thanks to everyone for staying like four hours, I don’t even know what the time is now! It was a different dynamic because normally I’m the younger one [in matches]… props to her, she’s already a great player.

Two-and-a-half months after my last tournament, really happy to get through against an opponent like that.”

Up next for the Brit is another first-time meeting, this time vs. Slovakia’s 24-year-old Viktoria Kuzmova after the qualifier got the job done (6-4, 6-4) against America’s Bernarda Pera.

Xiyu Wang [5] vs. Karolina Muchova and Rebeka Masarova vs. Sloane Stephens [2] will both be concluded early tomorrow, after rain-enforced suspensions.

Russia’s Anna Blinkova faces the Masarova-Stephens winner next, after a tense finish to her three-set win over Italy’s Elisabetta Cocciaretto. Elena Gabriela Ruse, another qualifier, will play the Wang-Muchova winner after she was pushed all the way by New Zealand’s Erin Routliffe.

The 27-year-old, almost exclusively a doubles player and ranked #30 in that discipline, was down 4-0 in the deciding set but clawed her way back to 4-5… only to be broken to love as Ruse finally completed a gritty victory.

Speaking of discipline, teen star Coco Gauff – ranked in the world’s top 10 for both singles and doubles – began her season with a 6-1, 6-4 win over Wimbledon semifinalist Tatjana Maria.

The 18-year-old, who ended her 2022 campaign on a five-match losing streak and was heavily criticised for her showing at the WTA Finals, will be hoping to achieve more consistency to start the year. She’ll play either Xinyu Wang or 2020 Australian Open champion Sofia Kenin next in R2. 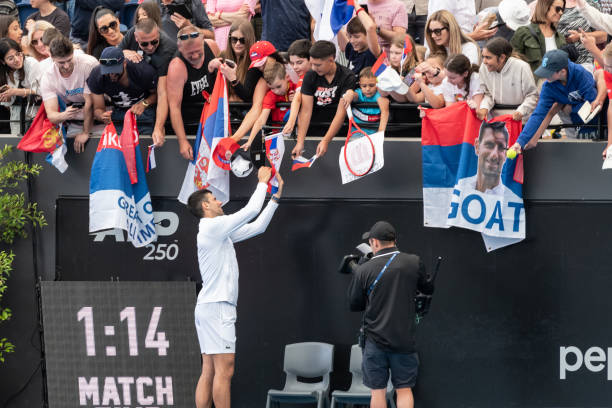 Djokovic signs autographs, balls and the like after his straight-sets win over Lestienne

Daniil Medvedev began his 2023 season victorious, though it wouldn’t have been a fulfilling one after Lorenzo Sonego retired after suffering muscle cramps – the final scoreline 7-6 (8-6), 2-1 for the 2021 US Open champion.

He’ll face Miomir Kecmanovic tomorrow and has a 2-0 H2H against the Serb, having bested him at Roland Garros and Los Cabos last season.

2022 US Open semi-finalist Karen Khachanov was made to work for it, but eventually navigated past a tricky second set en route to beating Argentina’s Pedro Cachin 6-2, 6-4 in just shy of 90 minutes.

ATP Finals champion Novak Djokovic, who has won the Australian Open title a record nine times during his career to date, made a successful singles return to a country he knows very well after being tested in parts and flourishing in others against France’s Constant Lestienne.

Kyle Edmund’s slow build back on the competitive scene continues, though the 27-year-old’s protected ranking didn’t stop him from drawing one of the most difficult possible first-round opponents in US Open quarterfinalist Jannik Sinner – who beat him 6-3, 6-2.

Staying on the topic of comeback wins: Roberto Bautista-Agut, who ended 2022 with a three-match losing streak, started his season by recovering from a set and break down to beat the unpredictable Andrey Rublev: 4-6, 6-3, 6-4.

His reward is a matchup against 22-year-old American Sebastian Korda, who held his nerve during tight moments and served brilliantly en route to an eventual straight-sets win – 7-6, 6-3 – against Andy Murray.

Murray, who saved two break points at 5-5 and initially led the first set tiebreak, will be left wondering how the encounter got away from him so quickly.

Having been broken at 2-4, he could’ve turned set two on its head to break straight back, but fired a forehand into the net on his only break point of the final set. Having been aggressive and clear with his decision-making to earn that chance, he was punished for passivity there.

That typified a frustrating outing for the 35-year-old former world no. 1, whose serving wasn’t good enough and Korda just executed better. 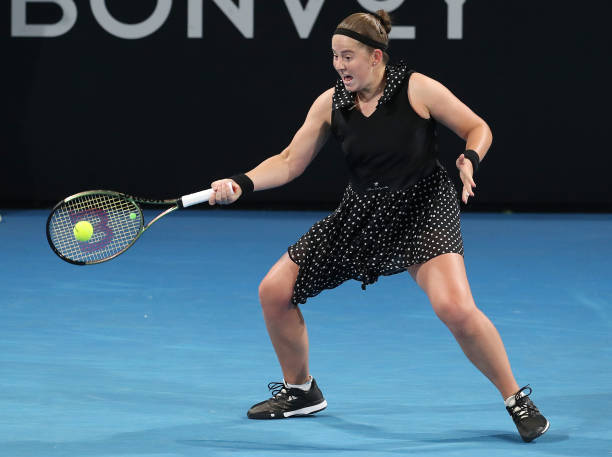 Ostapenko in action during her comprehensive victory at Pliskova’s expense

This result wouldn’t come as a shock to regular viewers, but in terms of sheer numbers, Anett Kontaveit – the tournament’s sixth seed – was bested in a deciding set tiebreak by China’s 20-year-old Qinwen Zheng (6-1, 4-6, 7-6).

It’ll be interesting to see if she can continue her form against another stern test in the form of two-time Australian Open champion Victoria Azarenka next, after the Belarusian edged two tiebreaks to beat Ukrainian qualifier Anhelina Kalinina: 7-6 (11-9), 7-6 (7-5).

American qualifier Claire Liu recovered from a set down to beat Priscilla Hon: 4-6, 6-3, 6-3 – and her reward is a first meeting with Linda Noskova tomorrow.

There was no need for three sets as far as Romania’s Sorana Cirstea was concerned, though it must’ve crept into her mind during a markedly different second set vs. Switzerland’s Viktorija Golubic: 6-0, 7-6 (7-1) the final score.

She’ll be the first match of 2023 for world no. 2 Ons Jabeur tomorrow, as the two-time Grand Slam runner-up had a bye into R2 in Adelaide.

Jelena Ostapenko has a tendency to make matches harder for herself than needs be, but there was no such hint of that as she blasted past Czech’s Karolina Pliskova – 6-1, 6-3 in 67 minutes against the former world no. 1.

Tim van Rijthoven, who burst onto the wider tennis scene last summer, started his season with a 6-4, 6-4 win over Moldova’s Radu Albot. He’ll play Aslan Karatsev next, a surprise Australian Open semifinalist two years ago, after he won 6-1, 6-3 against Spain’s Pablo Andujar.

Another qualifier, India’s own Ramkumar Ramanathan, led by a set but the scoreboard pressure ultimately told as Spain’s Pedro Martinez eventually outlasted him in three sets too: 3-6, 7-5, 6-3.

His reward is a tough task against the tournament’s fourth seed, Argentina’s Sebastian Baez, having split the H2H 1-1 over the last two seasons.

Up next, he’ll play Botic van de Zandschulp tomorrow – who also ended the previous campaign in disappointing singles form despite a doubles title with Tallon Griekspoor in Antwerp.