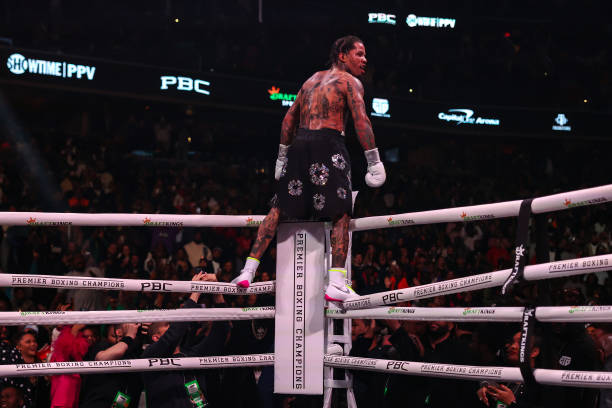 “I was a little surprised but when I caught him, I knew he was hurt bad and didn’t want to show it because he’s a fighter,” Gervonta Davis declared post-fight. The 28-year-old improved to 28-0 (26 KOs) after a R9 TKO over WBA super-featherweight champion Hector Luis Garcia, inflicting the Dominican’s first professional defeat. However some hurdles remain, including an ongoing jury trial starting next month, before the Ryan Garcia megafight can be confirmed for April.

Tank starts 2023 with credible victory on his resume

After a tense first three rounds, Davis’ power was on full display in rounds four through six as he began upping the intensity and landing more significant shots against a gamely Hector Garcia.

Garcia’s defence isn’t exactly watertight – but neither is that of the box office attraction – so there was a bit of to-and-fro between them during this period.

That lulled the 31-year-old into a false sense of security about how long he could afford to fight up close, appearing to welcome Davis unloading lefts and rights in the seventh.

There was a bizarre pause for crowd trouble outside the ring midway through round eight, and that made for an anticlimactic finish shortly afterwards.

Garcia looked concussed as referee Albert Earl Brown ushered him to his corner after that round had concluded, having come very close to receiving a standing eight count – absorbing too much damage standing in the pocket, taking a backwards step for the first time in a long while.

That was the direct result of Davis’ patented left hand landing flush one too many times. He had a glazed look on his face, intended to walk to the wrong corner and told his team he couldn’t see out of his right eye. In a bloodthirsty and merciless sport, they were right to stop it at that stage.

Davis didn’t swell up the soft tissue or break his eye socket. He hit Garcia so hard that he was temporarily blinded and didn’t know where he was. That sounds like what it would be it he was hit in the head with a hammer. https://t.co/rJE66Op1vR

What about Jaron Ennis, how did he do? 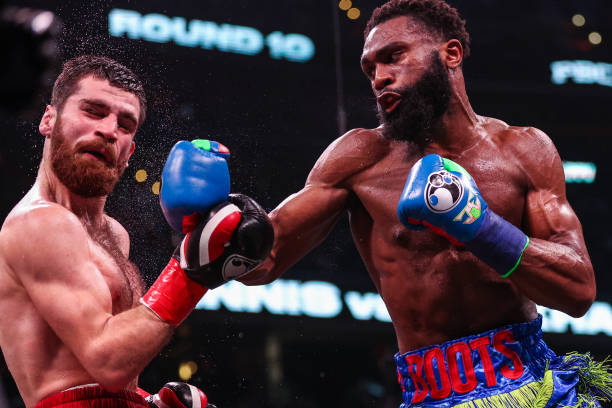 Ennis was a comfortable winner vs. Chukhadzhian, but didn’t live up to sky-high expectations

On a PPV main card severely lacking knockouts, the crowd got understandably restless.

They expected Jaron Ennis to blow away unheralded Karen Chukhadzhian, but instead the Ukrainian was slippery and often on the move, growing in confidence and landing his own attacks upon occasion too – left hooks, straight shots and counterpunching from the back foot.

Ennis – a knockout artist – only had a pair of decision wins in his pro career (29-0, 27 KOs) and was made to look ordinary at times, as the 25-year-old got to grips with Chukhadzhian’s tactics.

By the tenth round, he was frustrated himself. Guilty of overextending on some of his power punches and absorbing too much resistance for comfort, Ennis ripped body shots in the 10th.

You could see sections of the crowd getting excited, rising to their feet, but the 26-year-old shut the door by walking through the damage and circling away.

It rather typified how this fight went, Ennis’ effectiveness nullified by a careful Chukhadzhian – silencing critics quick to dismiss his chances of going many rounds, let alone go the distance.

He started the final round ripping right-hands and although output wasn’t as accurate nor active compared to Boots, it was a noteworthy effort given the circumstances.

Shoutout to him for coming, not a lot of people wanted to. I want Spence, Bud, Ortiz-Stanionis winner, most definitely. All the top guys, let’s get it.