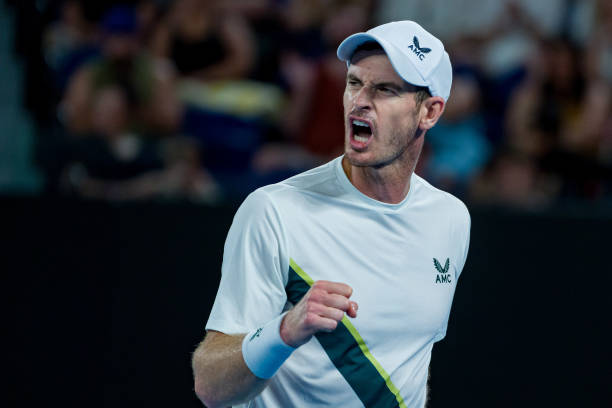 Andy Murray ended a near five-year long wait to down a top-20 player in a Major, saving a match point en route to outlasting last year’s semifinalist Matteo Berrettini. Elsewhere, Alexander Zverev and Ons Jabeur both survived some uncomfortable situations while volatile weather – from extreme heat to heavy rain – limited play elsewhere during a disrupted Day 2. 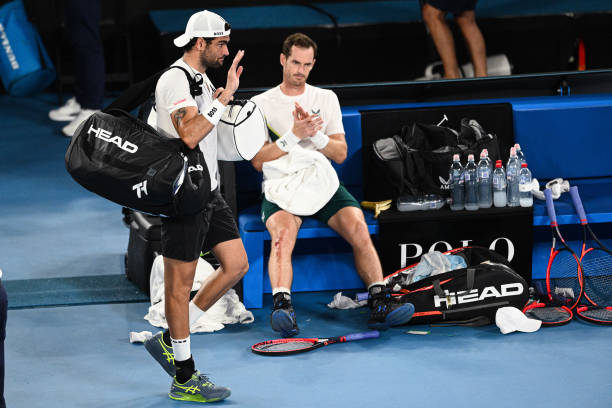 Having recovered from a slow start and a two-set deficit, last year’s semi-finalist Matteo Berrettini had a match point opportunity on Andy Murray’s racquet at 5-4. Murray brought him forward, with open court to attack, and Berrettini netted a makeable two-handed backhand.

The 26-year-old Italian repeatedly referenced that moment in a reflective post-match press conference and rightly so, as Murray described it as a “pretty bad shot” and told Eurosport afterwards that he was lucky to escape that tense sequence intact.

Another one on the next point helped relieve pressure on the three-time Major champion, who served intelligently and forced them into a deciding set breaker.

There, he raced away to a 5-0 lead – benefiting from Berrettini’s first serve disappearing – and even in a first to ten-point scenario, things could’ve got tight.

Instead they did, a forehand net cord ending Berrettini’s tournament before it properly started in a section with US Open finalist Casper Ruud down the other side.

There were only five total points won between them (166-161 for Murray), and the former world no. 1 – the tournament’s champion in 2012 – always relishes these big matches, regardless of where they are in the draw. Recently against him, they’ve been early in Grand Slams.

In the last two Majors, he fell short during gruelling battles against John Isner and Stefanos Tsitsipas. There was to be no repeat this time around.

“Obviously an amazing win, to stay with it in the fifth set when he was playing or serving as well as he was, great mental effort, physically both of us are tired at the end and I’ve really put a lot of work in the last three months – been playing well in practice – but lost a few of these matches in the past, that could’ve got away from me there too.

I was lucky on match point with a net cord but earned that luck, stayed remarkably calm at the end, got a really good tiebreak but changed to the block return on first serve, put a few returns in play and felt like I took the initiative when I could in rallies, served quite smart during the match.

He hit a pretty bad shot on match point, was lucky there for sure but I served smart, played every point.”

Berrettini served a whopping 31 aces to Murray’s 10, produced 72 winners – 32 more than the Brit – but also 25 more unforced errors (59-34) and also discussed the difficulty of adjusting to the roof closing in press afterwards.

“Andy handled the situation better, good thing is that I turned the match around with not a lot of tennis, didn’t play great today but had a match point… it’s tough to talk about the match now, could’ve been different. Last year, I won 7-6 in the fifth, this year I lost – that’s tennis.

It was humid and then drier, we have to adjust to the conditions… I warmed up outside and the ball was flying but we’re talking about nothing, I had match point and missed on his ball.

I feel tired but didn’t lose because of that, it’s impressive what he could do after so many surgeries, the kilometres he’s run, shows how much he loves the game. I didn’t train much in the last preseason, was still struggling with some injuries, [but I tried to see if] I’m ready for five sets and I am.” 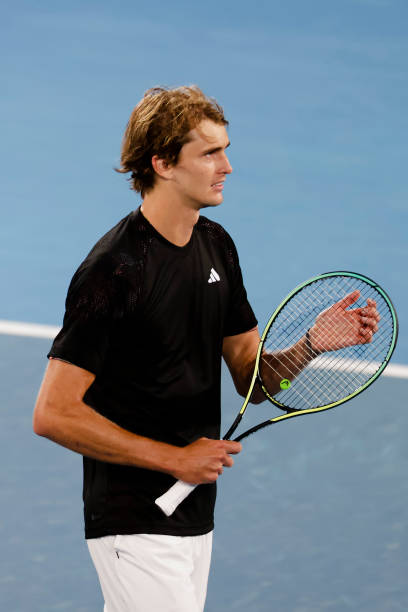 Olympic champion Alexander Zverev let out an extended roar in celebration at the eventual conclusion, after recovering from a set down – on two occasions – to overwhelm Peruvian lucky loser Juan Pablo Varillas in five sets: 4-6, 6-1, 5-7, 7-6 (7-3), 6-4.

The 27-year-old, who lost in the final round of qualifying against Japan’s Yosuke Watanuki, had a free hit here and was playing precisely like that against the returning former world no. 2.

Zverev’s serving flickered up-and-down throughout a four-hour tussle, where both had excellent periods as well as forgettable moments too. In his post-match interview, the 25-year-old was naturally tired but grateful after enduring a gruelling experience and emerging victorious.

“I’ve missed this, makes all the pain and suffering over the last seven months worth it.

I had no expectations to be honest because this is my first Grand Slam match back, he [Varillas] is an incredible player – this was probably one of the best matches of his life – playing like this, he’s gonna continue up the rankings and I wish him nothing but the best, a tremendous talent.

Thanks for the support, I lost faith at points and thought I’d lose for sure… amazing to come back to Australian Open – it’s my favourite because of you guys, hopefully the support will continue.”

The Serb’s left hamstring was double strapped with kinesio tape and he was seen stretching it out, while limping upon occasion, as injury fears will undoubtedly persist.

That comes with the territory, given the 35-year-old’s well-documented quest to win this Major for a tenth time and level the Grand Slam race with rival Rafael Nadal.

There were some brief concerns, agitation too, midway through set two, but he found his formidable ball-striking to earn an blistering finish: winning 24 of 28 points played in set three.

“Thanks for staying so late, giving me such a welcoming reception, I’m very happy to be here, this is the most special court in my life.

I’m pleased with the third set, didn’t give him a chance to breathe, Carballes Baena is a great guy – we train a lot in Spain – this was his first match on Rod Laver, he deserves applause.

Thanks to my parents and brother, they were here for my first title in 2008, hopefully they bring me good luck.” 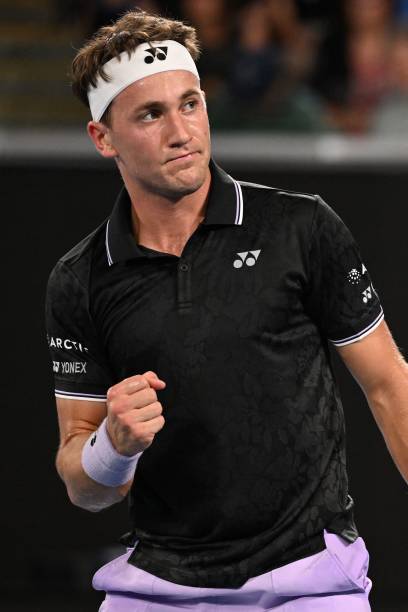 Meanwhile the tournament’s second seed, Casper Ruud, was made to work for his four-set win: 6-3, 7-6 (8-6), 6-7 (5-7),l 6-3) in three hours 20 minutes against Czech youngster Tomas Machac – the 22-year-old has quietly been progressing up the professional ranks over the past two years.

During a match with 21 aces between them, Ruud’s first serve percentage stats (65%) were largely iffy in a match of fine margins, and it could’ve easily gone the distance.

Importantly, the Norwegian responded well to the initial disappointment of their match being prolonged after losing the breaker.

He upped his level and maintained pressure on Machac in set four during his service games – getting the break at 3-3, then saving a break back point to consolidate it, after which point the world no. 110 had no answers for his surging finish.

He’ll play Machac’s agemate in America’s Jenson Brooksby next, aware that the aforementioned Berrettini-Murray result opens up his section of the draw with two Spanish seeds remaining. 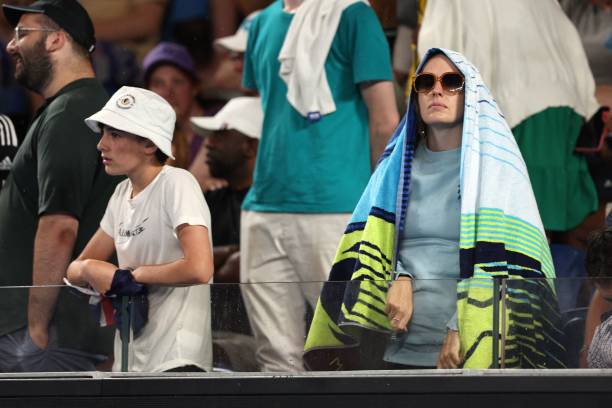 There was extreme heat suspending play early on, then periods of rainfall during a disrupted day

It was a good day for Daniel Evans [25] too, despite an impromptu break because of extremely hot weather conditions, as he won 6-4, 4-6, 6-4, 6-4 against Argentina’s Facundo Bagnis.

He’ll play Jeremy Chardy [PR] on Thursday, after the French vet recovered from a set down to overwhelm Colombia’s Daniel Elahi Galan in four sets himself.

Elsewhere in that section, 2021 quarterfinalist Andrey Rublev didn’t have it all his own way but was eventually a comfortable winner: 6-3, 6-4, 6-2 against 2020 US Open champion Dominic Thiem [WC], a fourth straight R1 Major loss as his slow progress back atop the sport continues.

Paris Masters champion Holger Rune would’ve been grateful to finish his match without fuss: 6-2, 6-3, 6-4 vs. Serbia’s Filip Krajinovic in just over two hours. The 19-year-old reeled off 39 winners and just one more unforced error (26) than the 30-year-old, earning his first win of 2023. 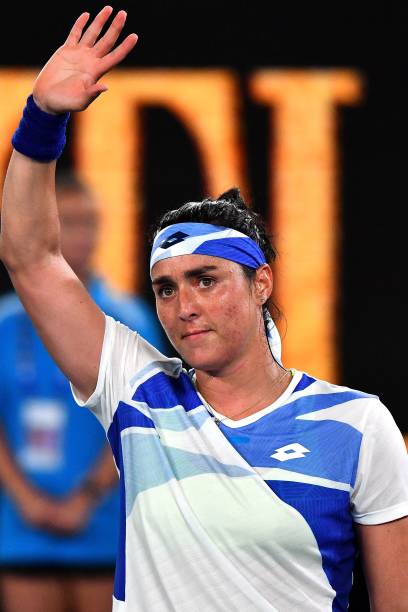 It was quite anxious for sustained periods, but world no. 2 Ons Jabeur successfully navigated past a tricky test in a determined Tamara Zidansek display: 7-6 (10-8), 4-6, 6-1 in two hours 19 minutes, after the Tunisian and her team endured a rollercoaster ride of emotions throughout.

The scoreline doesn’t tell the full story either. She saved three set points before clinching set one with her third, lost set two without warning before hitting cleaner and running away with victory in the decider as the Slovenian drastically ran out of steam having worked to level the score.

Having finished runner-up at two of last season’s Majors, the 28-year-old – who missed this tournament twelve months ago with a back injury – joked during her flash Eurosport interview that sitting down on the couch is better than suffering like she had to, today.

“I just tried to play better and better [as time wore on], it’s frustrating because you’re playing better in practice but matches are completely different.”

Jabeur sprayed errors (49 total, including 31 in set one) aplenty and again displayed some rather demonstrative body language after some mistakes, like her season-opening tournament in Adelaide, but constructed her points well and fired a flurry of forehand winners to boot.

The Czech teenager faces another home hopeful in fellow wildcard Kimberly Birrell, recovering from a set down to stifle one of last year’s quarterfinalists, Kaia Kanepi [31]: 3-6, 7-6 (7-4), 6-1.

There was no such issues for another seed in Russia’s Liudmila Samsonova [18]. who was a 6-2, 6-4 winner against Italy’s Jasmine Paolini. 22 first-round singles matches, 10 of which haven’t yet been started, are still to be completed as a result of the extended weather delays. They are…

Matches still to finish on Day 3, in full:

Seeds to fall, on both tours and any in immediate jeopardy?

Chilean qualifier Nicolas Jarry was a surprising winner in straight-sets: 6-3, 6-4, 7-6 (7-3) – against Serbia’s Miomir Kecmanovic [26], who reached the fourth round twelve months ago. 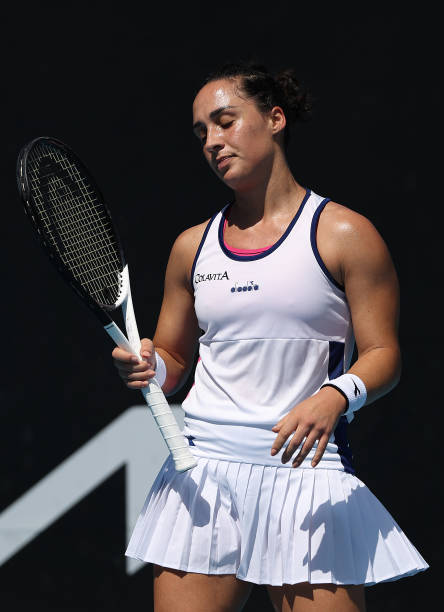 As far as those in danger of losing ongoing or delayed matches, it’s less clear.

Only one seed on the men’s tour hasn’t yet finished – 2019 quarterfinalist Roberto Bautista Agut – who lost against American wildcard JJ Wolf in R1 at the US Open, but he’s begun the season well and after breaking early in set two, should have enough to see off Sousa’s best efforts.

Haddad Maia has started the new season well and faces Parrizas-Diaz, who has beaten her twice before – both in 2021 Challenger events – while Kasatkina is heavily favoured to beat her younger compatriot Gracheva, though the 22-year-old technically has a free hit here.

A first H2H meeting will always be of interest elsewhere in that section, featuring 23rd seed Zhang – who is on a three-match losing streak dating back to mid-December.

Meanwhile, Tig’s compatriot Irina-Camelia Begu has a sneaky challenge in the form of 21-year-old American talent and lucky loser Elizabeth Mandlik, who is capable of causing an upset too.