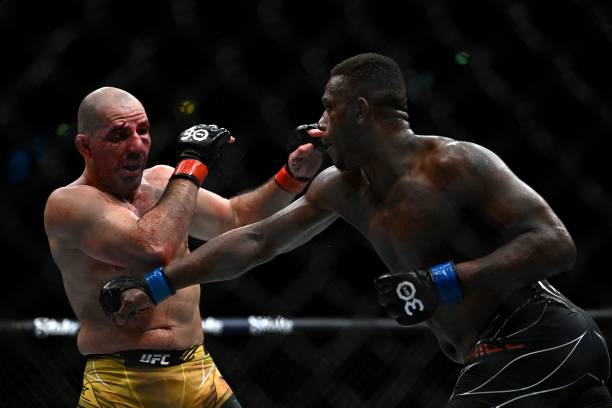 Jamahal Hill became the first Dana White’s Contender Series graduate to earn UFC gold after a dominant, exhausting five-round decision win over former champion Glover Teixeira, who announced his retirement post-fight. Elsewhere, Brandon Moreno ended his Deiveson Figueiredo series with a third-round TKO before his rival confirmed he’ll be moving up to bantamweight – while there were emphatic victories for Gilbert Burns and Jessica Andrade. 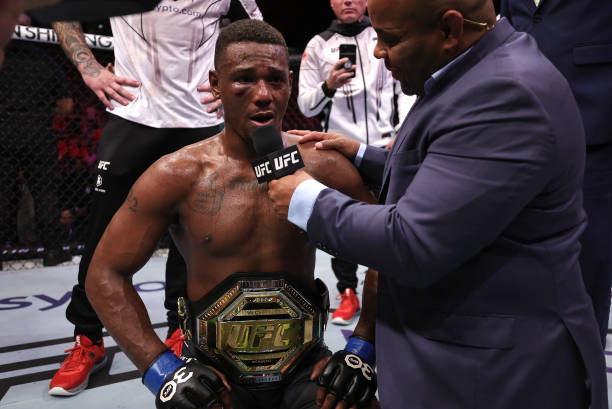 The dream scenario for former champion Glover Teixeira was to produce an impressive showing, rolling back the years on home soil in Rio de Janeiro, then retire on top of a division littered with movement at the top over the past three years.

Instead, the 43-year-old knew he’d be in for a difficult assignment early on after repeatedly threatening takedowns that were constantly stuffed by Hill. In response, the #7 ranked contender landed good kicks and was flowing well with his stand-up skills too.

“Move your head, stop with one strike at a time, give me some two and threes,” was the command from Glover’s corner – easier said than done given the speed differential between the pair, something Hill continued to exploit throughout.

Jamahal seriously wobbled Teixeira in R2 after landing a trio of left head kicks, an uppercut through the guard and some straight shots too.

Guilty of being overeager, he survived a bit of danger himself as the roles reversed briefly – Teixeira finally getting him to ground, though not for long enough to fashion a submission.

Teixeira was leaking blood and running on fumes in the third round after absorbing one too many head kicks flush, stumbling to the mat and just when you thought referee Marc Goddard would stop the contest, he’d throw wildly and do enough to keep the official away. 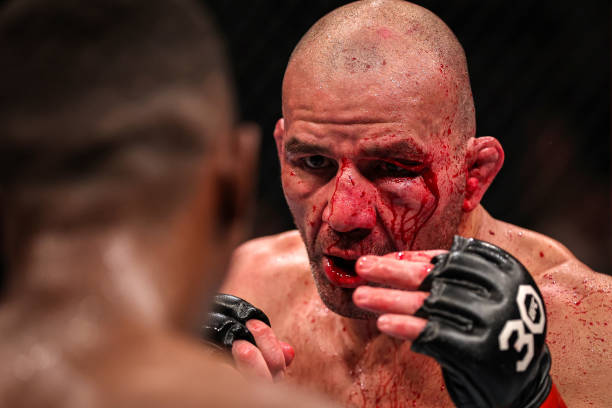 Teixeira was cut and bloodied against Hill, who chained his attacks well and defended takedowns

Hill’s success levels increased though, as Teixeira couldn’t see out of his left eye properly and was sporting some rather gruesome cuts around both his eyes before R4 began.

He threatened a hail mary, but not much else in the first championship round as many called for Teixeira to be mercifully stopped for his own good.

Hill’s piercing jab had landed early on, and now he kept persisting with those aforementioned kicks, knowing he kept defending takedowns with relative ease while being content in his ability to outstrike the former champion – whether up close or at distance.

Despite having so much blood in-and-around his eyes that he couldn’t see properly, Teixeira avoided the same fate as Figueiredo – more on him later – passing the doctor’s assessment before the fifth and final round.

Hil meanwhile, had unofficially surpassed Marvin Vettori for the most significant strikes landed in a light-heavyweight contest and knew there’d be more work to do still. The pro-Teixeira crowd were in for an early, fleeting surprise to start the fifth: a rare takedown for their man.

The 43-year-old got the hands locked and secured only his second in 17 attempts, in what felt like his final throw of the dice. He scrambled to secure full mount and got it momentarily, before Hill reversed position and held firm, the final act typifying a dominant victory on enemy soil.

Jamahal Hill is the real deal. That was a sensational performance. Tremendous heart from Glover. What a fight. #UFC283

I'll admit it: I completely slept on Hill's ability to defend the takedown. Be it the body lock or the double against the fence, he did it. He never got stuck underneath and turned takedowns against him into his own offensive wrestling. He massively leveled up.

Jamahal is gonna be champ a while I think

Congratulations to both men in the main event. What a sport this is!

Staying patient pays off for Moreno 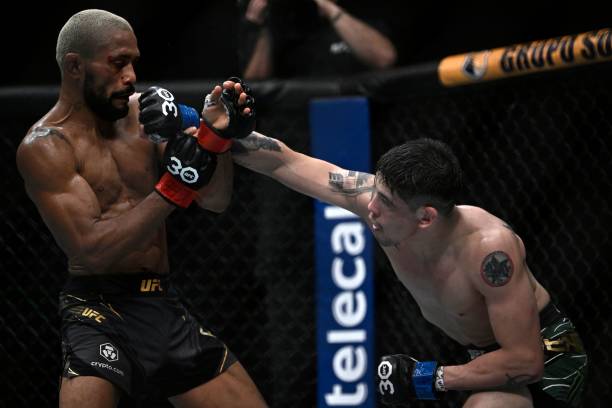 Moreno picked his punches well, was defensively responsible and a slack Figueiredo had no answers

Moreno fought the perfect fight through 10 minutes, with wrestling and grappling aplenty to frustrate the champion – who threatened a guillotine choke midway through R2 but was comfortably second best, unlike their trilogy matchup twelve months prior.

Moreno, who returned to action later in the year with a R3 TKO win over Kai Kara-France at UFC 277, was again noticeably much faster during their stand-up exchanges while staying defensively responsible, which wasn’t the case as he found himself outpointed at UFC 270.

Moreno’s left hook in R3 saw Figueiredo recoil in pain and immediately complain to referee Herb Dean, who ignored his protests about a possible eyepoke. Replays showed that was justified.

Moreno raced to log more ground control time with another takedown, wearing on the God of War‘s physical reserves as he was still visibly bothered by the eye issue in bottom position.

Although his corner delivered instructions, they didn’t matter. Figueiredo couldn’t see out of his right eye and after a brief doctor’s assessment, the fight was ended between rounds.

An anti-climactic ending to an unexpected four-fight series, sure. Figueiredo looked slower and lacked urgency, much like their rematch two years prior, and it’ll be interesting to see how he campaigns at 135lbs – he’s not young (35) and the division is a deep, tough one. 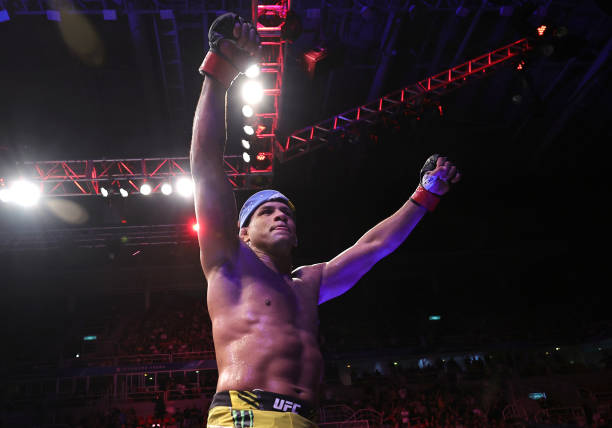 Burns wasted no time at all, securing a submission win over Magny on his Octagon return

Former welterweight title challenger Gilbert Burns [5] insisted “they’re not on my level,” when asked about prospective opponents post-fight – having eased to a R1 head-and-arm submission win over Neil Magny [12]. One thing’s clear though: he wants a quick turnaround.

There wasn’t much upside for Durinho besides dusting off the cobwebs when this fight was announced after being involved in a FOTY contender against Khamzat Chimaev last April.

However, he did as promised: delivering a stoppage win against a tough test in Magny, before passionately calling out former interim titlist Colby Covington.

It quickly became a tough watch, but a predictable outcome all the same as former women’s strawweight champion Jessica Andrade scored a number of new career-highs during a dominant decision win over former title challenger Lauren Murphy (30-25, 30-25, 30-26).

After a display like this, where she again showcased her strength by defending takedowns and refusing to get involved in grappling exchanges, she might just get the Zhang Weili title shot.

In the main card opener at 205lbs, Johnny Walker [12] earned an unorthodox first-round TKO win over Paul Craig [9] – landing a stinging right cross before following up with a series of strikes after a leg kick was caught, leaving the Scotsman defensively helpless shortly afterwards.