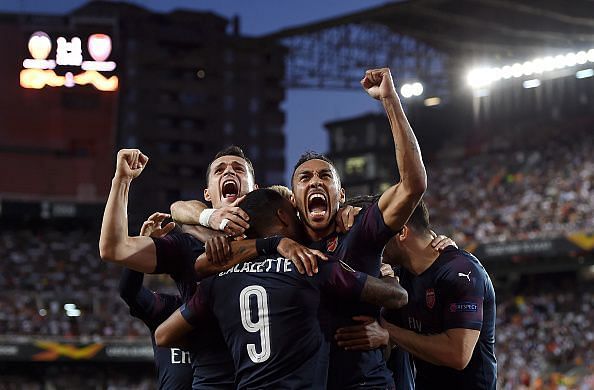 Here’s a look at five talking points, as Arsenal made history by securing their first European Final since 2006 with a 4-2 away win (7-3, aggregate) over Valencia at the Mestalla. END_OF_DOCUMENT_TOKEN_TO_BE_REPLACED 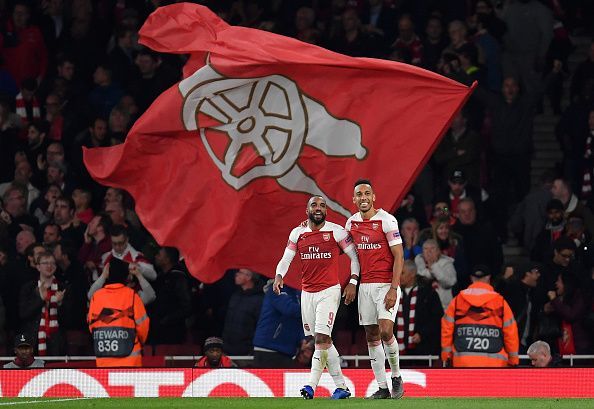 Arsenal were 3-1 winners vs. Valencia in their Europa League semi-final clash at the Emirates, but what were five things we learned here?
END_OF_DOCUMENT_TOKEN_TO_BE_REPLACED

Alexandre Lacazette’s brace, coupled with a late finish by Pierre-Emerick Aubameyang helped Arsenal to a 3-1 win over Valencia – who now have it all to do in their Europa League semi-final return leg next week.
END_OF_DOCUMENT_TOKEN_TO_BE_REPLACED

Arséne Wenger had a perfect opportunity to introduce both talented youngsters and a few unearthed gems at the Emirates this past weekend in their annual pre-season tournament; what did we learn from it?

Arsenal won this year’s Emirates Cup tournament, for the first time in five years. Over the past few seasons plenty of criticism has been placed upon the Gunners for their inability to win trophies, but with back-to-back FA Cup triumphs, silverware is well and truly back in north London.

This in itself gives the club’s supporters plenty of optimism going into the new season – especially after they were only twelve points away from eventual league winners Chelsea last term, despite many of their key players being ruled out through injury at some stage of the campaign itself.

Pre-season is a perfect opportunity for players to stake their claim ahead of the curtain raiser, and Arséne Wenger’s men have been one of the standout teams in terms of quality, even without last season’s talisman Alexis Sánchez; who is currently resting after his success with Chile at the Copa América earlier on in the summer.

Here are five things we learned from the Emirates Cup tournament, which was played this past weekend –

1) Petr Cech is a welcome, and much-needed addition

No offence intended to David Ospina, or Wojciech Szczesny for that matter. But, Arsenal have not had a world-class goalkeeper for a decade. Now, they do. Arguably one of, if not the best transfer of the summer – signing Cech from a league rival, and Chelsea at that. The 33-year-old was frustrated at his lack of first-team opportunities last season with the Blues, which is to be expected considering he’s still a quality ‘keeper. However, Thibaut Courtois is ten years his junior, and has already boasted plenty of experience in La Liga as well as the UEFA Champions League with former side Atlético Madrid.

In-fact, Thibaut is highly-regarded as one of the best ‘keepers in Europe, and at such a young age, comes big responsibility. It was always clear that one of the two ‘keepers would not feature as much as they liked, because to rotate them equally could easily hurt the balance within the squad. Jose Mourinho utilised Cech when he saw fit, but it was not good enough for the Czech Republic international, who is still eager to be playing regular first-team football.

At 33, critics may suggest he’s not in his prime. However, goalkeepers especially in history have shown that age is just a number – playing regularly up until the age of 45 in some cases, and doing well too. Ospina did relatively well in his first season with the Gunners, it must be stressed. Did not make too many mistakes, slotted in when required and kept quite a few clean sheets too. He’s a good goalkeeper and deserves to be playing regularly; that was emphasised by his influential displays with his native Colombia at the Copa América where he single-handedly thwarted both Brazil and Argentina on a number of occasions. However, he’s not world-class material. Neither is Wojciech, at least, not yet.

Szczesny is a good ‘keeper, and continues to improve. Perhaps his loan move to Serie A side AS Roma will help to reiterate just how good he actually is, despite the recent smoking controversies that continue to surround the Polish stopper. Cech commands both respect (for his various achievements) and also confidence from his backline, which will definitely help the team defensively as a unit to concede less goals. That in turn, will win them more points on their pursuit of success..

Inevitably, all good things must come to an end. The centre-back pairing that has solidified over the past three seasons between Per Mertesacker and Laurent Koscielny, will eventually come to a halt. They’ll still be playing, just not as regularly as they’d like – Mertesacker is 31 in September, Laurent is 30 in the same month. Real Madrid have been heavily linked with a £25million pound swoop for the latter, which is a refreshing change from the inexperienced 24-year-old that Wenger snapped up from Ligue 1 side Lorient in 2010. That being taken into account, it’s also startling to think that Arsenal’s backline will go through massive changes over the next few seasons. With that in mind, in steps Gabriel Paulista. The 24-year-old Brazilian, who was signed for £10million pounds from Villarreal in the January transfer window, has shown encouraging promise in his first few months as an Arsenal player. Admittedly, his English is not very good yet. But, as he continues to develop and mature, there’s no reason as to why he cannot assert himself as a first-team regular for years to come.

His tough-tackling, no-nonsense style is likened to that of Koscielny’s, not to mention his aerial ability and quick acceleration that he boasts. Partnered up with Calum Chambers, who was predominantly a right-back up until a season or two ago, the young Englishman continues to mature into a fine defender who commands his area and is able to play out from the back with composure. Between the duo, a solid partnership is brewing. Watch this space.

Contract talks have been ongoing for what seems like an age now, and although Theo’s been unlucky with injuries over the past two or three seasons as well, he needs a chance centre-stage to prove himself as the forward man Arsenal are longing for. Karim Benzema, Jackson Martinez, Gonzalo Higuaín and Alexandre Lacazette – but to name a few, have been linked with moves to the Gunners in recent seasons. None of which have joined, which could be seen as both a positive and a negative from the club’s perspective. They are looking for a player that can guarantee them twenty goals-a-season, without having to rely on the likes of Sánchez, so he can focus on creating more chances and being a nuisance for opposition defenders.

Walcott, could be that man. If he’s given an opportunity to do so, which he has taken rather clinically this pre-season. Just as he did in the final few fixtures of last term – namely his hat-trick against West Brom and his all-round display against Aston Villa in the cup final. In the Barclays Asia Trophy, as well as the Emirates Cup, Theo has flourished in a more attacking role. Next term, he needs the chance to do so on a regular basis. If he stays injury-free, there’s no limit to the possibilities at hand.

4) Mesut Özil continues to get better

Despite the constant criticism that continues to surround the silky German, you’d be lying if you said he isn’t consistently getting better as a player. After a stellar start to his career in north London, injuries and a lack of consistency hurt his form – and he was often accused of ‘drifting’ out of matches, where he’d only do one noteworthy skill, pass or otherwise throughout the ninety minutes, then go missing.

That has not been the case over the past twelve months, mind. Especially after recovering from his injury sustained last October, Mesut has continued to improve and looks a better player for it. Not only has he strengthened, with the typical assumption that he was not physical enough to survive in the Premier League at the beginning, but he’s also linked up well with his team-mates; showing exactly why Wenger forked out £42.5million pounds for him two years ago.

Özil has started to silence his doubters, and is going about his business quietly but efficiently. Chances created alone, Mesut tops the charts. Assists, which is one of his most eyecatching stats to date, he continues to add. Another dimension which is creeping in, is in the goals department. Five goals in all competitions last campaign, isn’t exactly the best, and he’ll be hoping to improve on that tally ahead of the upcoming season. Two goals and three assists in pre-season alone, something to look out for.

5) The future is bright at the Emirates

Pre-season proves to be a youngster’s chance with Arsenal every summer as the club look forward to showcasing the best talent within their ranks. Over the past few weeks alone, Wenger has given the club’s fans plenty to be content with – not least the talented youngsters that the Gunners boast within their youth levels. Alex Iwobi, Chuba Akpom and Jeff Reine-Adelaide have all taken their respective chances well to assert themselves within the pre-season squad, and were rewarded with opportunities to shine. All three did well, in similar attack-minded positions. This in itself is something to be encouraged by for the future, especially as two of the aforementioned have represented England at youth level; the other was unearthed within the French ranks and has already displayed startling maturity for his tender age.

Chambers, Hector Bellerín (who took his chance centre-stage this time last year) and Isaac Hayden – all of which are still 20-years-old, provide plenty of optimism about the conveyer belt of talent continuing to unfold in north London. That’s forgetting others too, such as Dan Crowley, Gedion Zelalem, Ainsley-Maitland Niles and Krystian Bielik to name but a few.

To conclude, the future is looking quite bright at the Emirates. Just like the present, then.