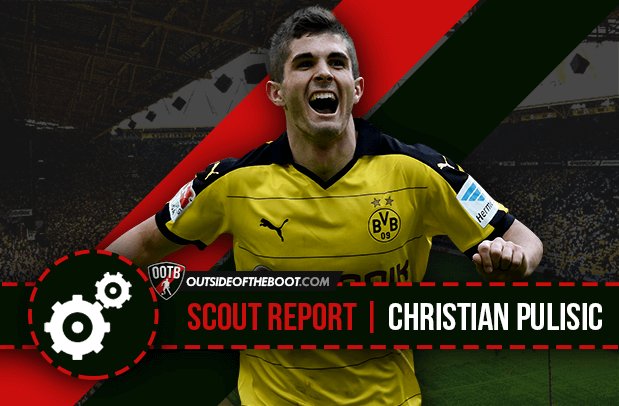 Bundesliga enthusiasts, as well as any followers of America’s national footballing side have had one player on their radar this season. A side continuing to improve year-upon-year, Borussia Dortmund pride themselves on developing both consistency as well as helping talented youngsters progress.

The likes of midfield trio Shinji Kagawa, Ilkay Gundogan and Mario Götze have all been given platforms to showcase their talent on the European stage – and even though the latter has opted for pastures new, the team dynamic has remained the same to good effect with title challenges and progression in Europe too. Christian Pulisic represents the new generation, and against Hamburg last month, announced himself to the adoring public with aplomb.

Who is Christian Pulisic?

The 17-year-old operates in an attack-minded midfield position, either as the CAM or on opposite wing. Right-footed with a strong frame on his young shoulders, he made his senior USA debut at the end of March during their 4-0 World Cup qualification win over Guatemala. Having already totalled 44 appearances at under-15 and under-17 level – where he netted 22 goals – the Hershey-born midfielder has asserted his quality on the international stage and is quickly turning heads at club level too.

Signing a professional contract with Dortmund in January last year, he was brought into the under-17 and under-19 squads, where he quickly thrived in competition. With ten goals and eight assists in just 15 games across both youth set-ups, his reward came with a call-up to join the first-team squad over the winter break back in December of last year.

Following a number of cameo appearances in both the Europa League and Bundesliga respectively, he was lively during the Revierderby before being rewarded with a start on the following weekend. When questioned by reports, manager Thomas Tuchel responded by saying that his age doesn’t detract from the club’s “huge appreciation” for his quality, and the fact that he’s not a “full time player” in the senior side just highlights the level of trust they have in his ability and potential to keep improving.

His neatly-worked finish against Hamburg saw him break a record: making him the youngest non-German, as well as the fourth-youngest player to score in the Bundesliga at 17 years and 212 days old. It was well-crafted and nestled in the bottom corner, leaving goalkeeper Rene Adler with no chance. He was equally effective throughout the game itself and did his best to create chances out of seemingly nothing, was direct with his running and once he started accelerating, it was tough for the opponents to contain his threat.

As illustrated by these two images, he worked tirelessly out of possession in both the Hamburg game as well as their 3-0 victory over VfB Stuttgart – where he netted his second strike in successive games, becoming the youngest player ever (foreign or domestic) to score two goals in the German top-flight.

Style of play, strengths and weaknesses

As an exciting prospect that can play in a multitude of different attacking positions, be it on either wing or just behind the striker as a number ten, Pulisic is equally as effective off-the-ball as he is with it. Intelligent movement into pockets of space allow him to be a credible passing option for team-mates when his side are in possession, edging towards the final third.

He is able to create a chance out of seemingly nothing at times and his direct running is a defender’s nightmare – his dribbling speed is excellently-timed in tough situations and he’s definitely not shy to contribute defensively out of possession too.

He seems to relish the possibility of being fouled, and doesn’t shirk away from potentially getting tackled, which highlights his self-belief as well as the refreshing attitude he holds. Usually fouled once or twice per 90 minutes, Pulisic takes it upon himself to beat defenders and usually does so with ease – without reaction if he is inevitably caught late by an opponent.

Spatial awareness is an important attribute to have and Pulisic’ ball control as well as his composure helps to create chances and complete key passes. With that being said, his decision-making at times can come into question: either holding the ball for too long or misplacing unneeded passes.

What does the future hold?

As he continues to mature, questions will be asked as to whether he can maintain his level of consistency, or if he’d potentially fade away, something that has occurred far too frequently over the past few years. As a result of this, some supporters – Dortmund and those across the pond – have been eager not to hype him up too aggressively: instead allowing him to focus on his football, at a club that evidently can help him to further his development whilst offering a harmonious and beneficial playing environment for him to grow from.

His main priority at the moment will to keep his head down, with a starting spot in the first-team up for grabs next season. In comparison to many of his attack-minded team-mates, he’s less experienced than them all – but that comes with its advantages as well as its evident drawbacks.

Figure 3: A look at how Dortmund could potentially line up next season, starting with a 4231 formation.

There’s no excess pressure on him to perform and alongside fellow 17-year-old Felix Passlack, they’re the only two teenagers in Tuchel’s first-team squad to date. They’ve got an intriguing mix of both experienced heads and youthful exuberance within the current crop, which definitely has the potential to go deep in the European competitions whilst keeping main domestic rivals Bayern Munich on their toes.

With Gundogan’s future at the club still uncertain as suggestions hint at a potential move to England, it’d be no surprise to see Pulisic get more first-team minutes next term as he continues to progress. He has been impressive when introduced and it’s clear to see he’s embracing life in Germany, where he can continue to get better and is already linking up well with a number of players with European pedigree – which is easier said than done.

From the nine-year-old boy who smoothly weaved his way past a plethora of opponents in his age-group at Little League, it’s clear that not much has changed since. As long as he continues to play with the same passion and desire he has until now, there’s no reason why he cannot flourish for many years to come.