The Lakers were given a run for their money in the fourth quarter, but ultimately restored their two-game series advantage vs. the Denver Nuggets. Now, the season’s comeback kings must respond as they have done regularly in Orlando – it’s win or go home time again for Michael Malone’s men. Will Nikola Jokic, Jamal Murray and co step up in another elimination game here? Or will the Lakers secure their first NBA Finals trip since 2010?

Denver did well to keep the scores competitive down the stretch, but in truth, they should have been dead and buried. They had Jamal Murray’s inspired shot-making to thank for giving them a chance when down seven or eight points down for large periods.

He shot 12-of-20 from the field in a game-high 45 minutes but was understandably gutted in the post-match media conference, after watching a winnable match flash past their reach.

Had he hit two of his threes (0-of-3 from distance), this would have been a different story.

Denver were left feeling an injustice after multiple missed foul calls by the officials, particularly when LeBron James took it upon himself to guard Murray one-on-one down the stretch.

But ultimately, they could only blame themselves. LA had a whopping 25 second-chance points with an important rebounding advantage early on. Denver by contrast, had just four.

Things have to change, otherwise their remarkable season ends with a whimper this weekend. 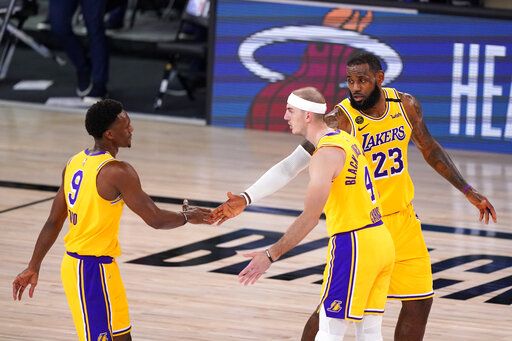 Rondo (far left) has thrived as the Lakers’ x-factor since returning in the WCSF Game 1 vs. Houston

It may seem like a broken record by this point, but Playoff Rondo has quickly proven a crucial part of the Lakers’ offense. He can’t afford to let up now.

Since returning for Game 1 against Houston in the Western semi-finals, he’s averaging 49.3% from the field, including 44% from three-point range.

During this nine-game span, he’s also recording 9.2 points and 7.5 assists per game, which are both improvements from his regular season numbers.

His understanding with Anthony Davis cannot be understated, while he’s able to create his own shot and facilitates well for others whenever either LeBron or AD are resting on the bench.

Danny Green and Kentavious Caldwell-Pope are streaky sharpshooters, but Rondo offers more and hasn’t looked back since recovering from troublesome injuries in the Orlando bubble.

As was the case in Game 3, it’s become increasingly clear that Denver’s chances of success probably lie with their supporting cast.

Jamal Murray struggled from three but had 32 points and eight assists in Game 4, while you can usually count on Nikola Jokic to deliver on both ends too.

Their teammates on the other hand, are very streaky yet play a decisive role in determining whether this series continues. Michael Porter Jr has impressed at times despite his suspect defence, while Monte Morris and Torrey Craig have shown flashes themselves.

Grant exploded for his playoff career-high with 26 points on 7-of-11 shooting in Game 3 and that was no accident. Aggressive from the off, he channelled that energy on Thursday but was significantly less efficient (46.2% FG), despite still recording 17 points.

He needs to excel on both ends of the floor and if he’s able to do so, the Nuggets have a real opportunity of extending this series into next week.

After gritting their teeth and grinding to a Game 4 victory on Thursday night, it’s understandable ESPN’s Basketball Power Index are favouring the Lakers to close the series this weekend.

They’ve given them a 60.1% chance of winning Game 5, while FiveThirtyEight’s win probability percentage is narrowly backing Denver (51%) instead to replicate Boston’s efforts 24 hours later by making it 3-2.

Can the Lakers close it out, or will Michael Malone’s defiant players respond accordingly here?

Prediction: Nuggets to win a tightly-contested matchup, pushing the series to six