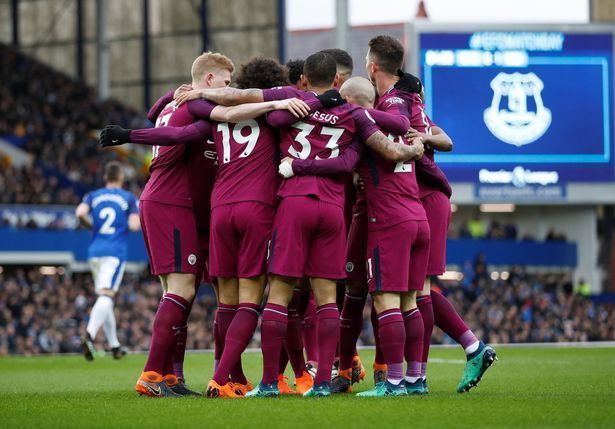 First-half goals from Leroy Sané, Gabriel Jesus and Raheem Sterling helped seal a comfortable away victory for Manchester City – who can now secure this season’s Premier League title with a win over local rivals United next weekend.

Yannick Bolasie, who missed a golden opportunity in the first-half, reduced arrears somewhat after the interval but Everton were punished for a slow, pedestrian start to proceedings and Pep Guardiola’s men have momentum ahead of a tricky Champions League encounter with Liverpool in midweek.

Here are 5 things we learned from City’s routine victory on Merseyside.

#5 Toffees fail to do their homework 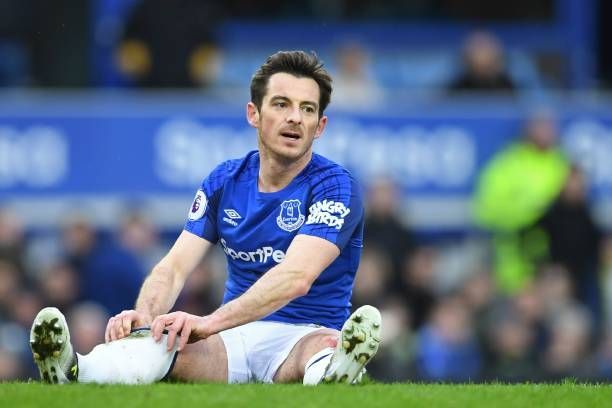 It was clear to see from the opening exchanges that the hosts had struggled to do their homework – adapting to Manchester City’s free-flowing attack while attempting to thwart it in the best way possible.

Instead, they allowed players like Kevin de Bruyne and David Silva far too much space to do what they do best: pull the strings and consequently create goal-scoring opportunities with seeming ease.

The gap between their backline and the defensive-midfield pairing of Wayne Rooney and Morgan Schneiderlin was worrying in itself and while Sam Allardyce’s initial plan may have been thrown out of the window following Sané’s early strike, his side did not deal with the goal well enough to justify a genuine comeback in truth.

Even in Idrissa Gueye’s absence, their midfield was not energetic nor intense enough to effectively deal with City’s attack-heavy tactics – instead, they allowed them to dominate possession and chances aplenty, making it even harder to counter their opponents as a result. 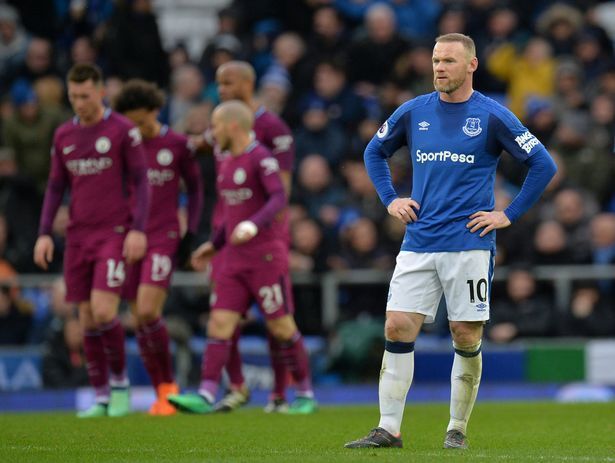 Rooney struggled in a more defensive-minded midfield role for Everton

You couldn’t help but feel sorry for Rooney here.

Playing in an unfamiliar role as part of a holding midfield duo, his lack of mobility was always going to be exposed against a City side who attack with blistering pace and dominate possession under Pep Guardiola, making it increasingly tough to get more than a few touches on the ball.

From kick-off Everton collectively were lethargic but Rooney was particularly poor. Two clearances, a dribble and key pass were the only positive statistics he had to show for during his time on the pitch – most of which was spent chasing shadows and trying to force City into delaying the inevitable, rather than making an active effort to stop them in their tracks.

As previously mentioned, it was clear that Everton missed Gueye in midfield. Between the pair of them, Wayne and Morgan Schneiderlin are not exactly very quick to begin with – so when faced with this opposition, it’s hard to believe Allardyce thought his gamble would pay off.

Tom Davies – who replaced Rooney before the hour mark – and Beni Baningime were probably watching on in frustration from the sidelines, knowing they’d both do a better job. More suited to midfield roles with such responsibility in spite of their youthful exuberance, it’s decisions like these which make supporters question Allardyce’s decision-making in regards to selection dilemmas.

#3 Silva and Sané excellent once again 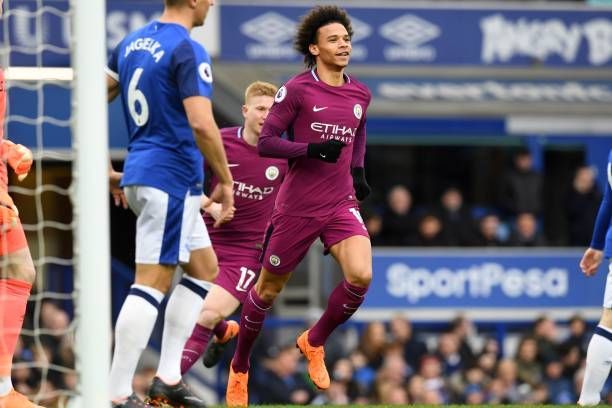 Sané wheels away to celebrate his opener with architect Silva

The pair have flourished this season and frankly, are a joy to watch. Silva has been doing so for many years, to the point where his efforts before this campaign were seemingly under-valued but for Sané, he continues to get better with experience under his belt.

They combined to score the opener after just four minutes, Sané slamming home with aplomb from a tight angle following an intricate passage of passing play from the middle third.

Silva turned provider once more to unselfishly feed Raheem Sterling with a tap-in after a ruthless counter-attack seconds following a rare Everton missed opportunity, which featured none other than Sané himself during the build-up. It was his blistering change of speed which saw him win possession high up the pitch, before releasing the ball in a dangerous area while Everton’s backline were still backpedalling.

Between the duo, they had nine key passes and more importantly, were Manchester City’s match-winners. 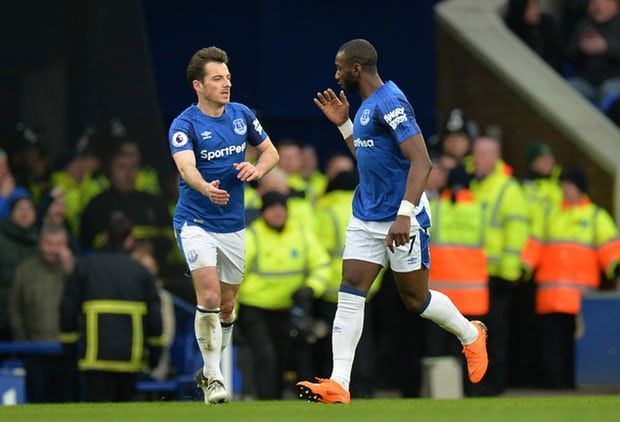 Despite defeat, Bolasie (right) did his best to lift Everton during a disappointing collective display

The major criticism which continues to hinder Yannick Bolasie’s game is his final ball, which is more often than not left wanting more. Whether it’s his decision-making in possession, doing too much with the ball or shooting when he should pass to open team-mates, there’s definitely a spark of energy within the DR Congo international waiting to burst.

Against Manchester City, he was Everton’s best player.

Although he should have scored with a close-range header sent wide over Ederson’s crossbar, Bolasie reduced arrears in the second 45 with a speculative strike from distance which cannoned in off the post. That goal, regardless of whether it was fortunate or not, was precisely what he deserved.

In a game like this, it’s unlikely that Everton players – especially their attackers – were likely to see much of the ball at their feet. That’s why it’s increasingly important that when you do get an opportunity, you make good use of it.

For large periods on this occasion, Bolasie found himself having to embrace his defensive responsibilities more than showcasing what he’s capable of on the attacking front. One tackle, two interceptions, two clearances and three fouls justify that.

However, it didn’t stop him from trying to lift Goodison while other team-mates were labouring across the pitch in frustration after conceding three before half-time. 23 touches, one accurate long pass and 83.3% pass accuracy – only Leighton Baines and Theo Walcott had better – it was a grind but the winger embraced the challenge despite the result. 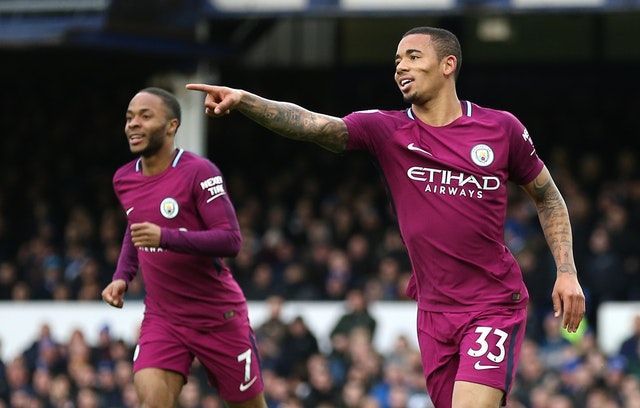 For someone who has endured such frustrating injury troubles in recent seasons, this was a performance to remember for Gabriel Jesus. He’s only completed the full 90 minutes of league action on three occasions this term prior to this victory but deserved to remain on the pitch throughout.

Here, he worked hard out of possession whilst being equally effective with the ball to fashion chances at will against a largely pedestrian Everton side. They were often caught in two minds at times whether to approach him and tackle or soak up pressure and pounce on mistakes.

For someone of his relative inexperience, it’s also quite telling to see how often he manages to find himself in promising positions in-and-around the area. His goal wasn’t pretty, but he crucially guided his header goalwards at speed from close-range and there was nothing that Jordan Pickford could do.

One key pass, one completed dribble, was fouled twice, one shot and importantly a goal to show for it. Not bad at all.