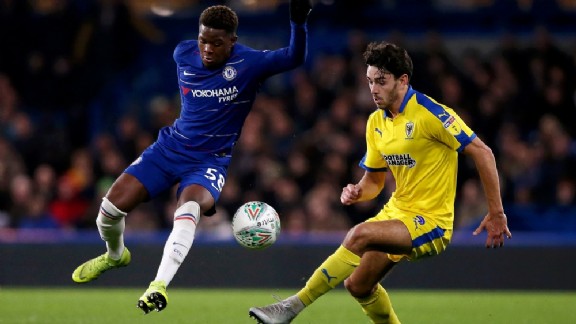 Everton, Leicester City and a number of European clubs are said to be monitoring the 18-year-old’s situation – with the Dutch forward unsettled by the lack of playing opportunities afforded to talented teenagers at Stamford Bridge.

With recent news suggesting Chelsea are doing their utmost to keep Callum Hudson-Odoi at the club – bar starting him – it appears that another talented teenage forward could be on their way out of west London this summer.

Daishawn Redan, who turned 18 last month, joined the Blues from Ajax on a free transfer in the summer of 2017. In 56 appearances for Chelsea’s various youth teams, Redan has netted 30 goals and created six assists – including 11 across all competitions this term.

With that being said, he appears no closer to the first-team and despite promotion into the U23s, he’s eager for senior minutes at a competitive level.

Redan’s worried, given the Blues’ lack of youth promotion

Given the likes of Hudson-Odoi and Ethan Ampadu – two of Chelsea’s best teenage prospects for quite some time – have been utilised sparingly, if at all, the signs are not boding well for Daishawn. Naturally, his quality has not gone unnoticed and clubs are monitoring the Dutchman’s progress.

Having made 53 appearances at various youth levels with the Netherlands, he has scored 42 goals to date – including nine in twelve for their U19s side alongside club teammate Juan Castillo.

Everton, eager to find their long-term solution at centre-forward, are unsurprisingly tracking his progress. Bundesliga side Borussia Monchengladbach are said to be monitoring his situation – while Italy’s AC Milan and AS Roma are doing the same.

Leicester City, who have endured tough times with inconsistent forwards not named Jamie Vardy in recent seasons are also said to be interested. West Ham are too, with all three Premier League sides mentioned harbouring European aspirations.

Redan is a versatile attacker with plenty of upside and having excelled in Ajax’s youth ranks, it’s unlikely Chelsea want to sell him. They may be tempted by a transfer offer they cannot refuse, which German newspaper BILD say would be in the region of £10m.