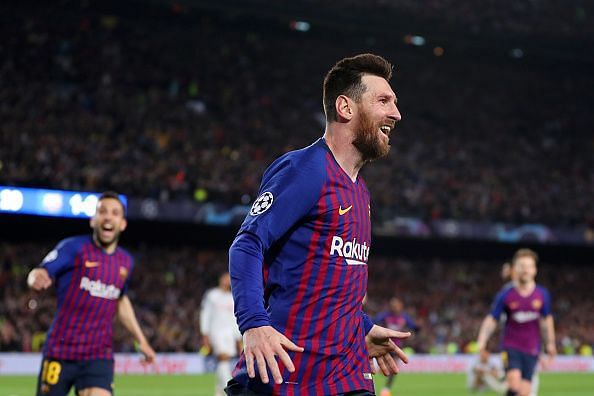 Barcelona were 3-0 winners against a wasteful Liverpool side at the Nou Camp, but what were five talking points from an enthralling Champions League semi-final in Spain?

Another Lionel Messi masterclass, coupled with Luis Suarez‘s first Champions League goal this season, ensure Barcelona take a comfortable 3-0 lead with them after an enthralling finish against Liverpoolahead of next week’s semi-final second leg fixture.

Suarez broke the deadlock with a composed finish against his former employers after 26 minutes, shortly after midfielder Naby Keita (groin) was forced off injured for Jurgen Klopp’s men. The Reds created promising chances of their own – Sadio Mane, James Milner and Mohamed Salah all coming close – but goalkeeper Marc-Andre ter Stegen was alert to the danger and dealt with their opportunities with poise to keep his clean sheet intact.

Then with 15 minutes left, Messi doubled Barca’s lead after a mazy run, consequent tackle and fortuitous bounce off Suarez hitting the crossbar saw the ball rebound into his path to slot home.

Eventually, he made it three after 82 minutes, this time scoring an excellent free-kick from distance which arrowed beyond a helpless Alisson. Liverpool, for all their promising spells, failed to make it count with goals and were punished by a ruthless Barca side who could have scored more in truth. Without further ado, here’s a look at five talking points from Barca’s commanding victory over the Reds: 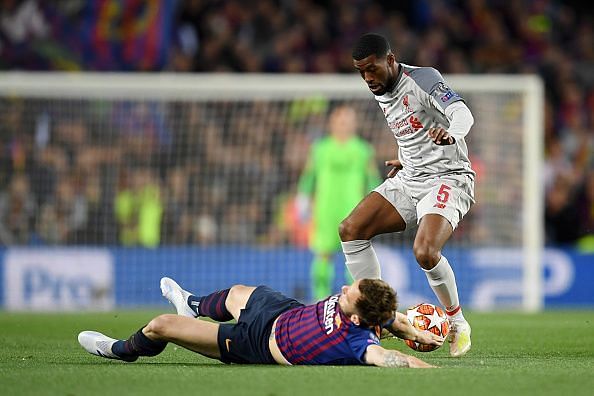 Klopp made four changes to the side that thrashed Huddersfield on Friday evening, with Georginio Wijnaldum taking up a more advanced attacking role with Roberto Firmino (ankle) among the substitutes’ bench.

All things considered, it was a surprise especially with Xherdan Shaqiri and Divock Origi on the bench – though the experienced Dutchman has prior experience playing further forward. Ultimately though, it was a selection dilemma that Klopp got wrong one way or another because Wijnaldum was largely disappointing.

In a game of such magnitude where the difference between winning and losing can often be so finite, the 28-year-old struggled to stamp his authority on the game, even if he wasn’t the only one.

Despite creating two key passes, he was dispossessed on two occasions and caught offside once – so technically those stats cancel each other out. Only Naby Keita, injured after 23 minutes, had less than his 30 touches for the visitors, yet his 82.6% pass completion rate wasn’t particularly impressive either. He won two of his six duels and generally failed to impose much creativity in the final third, despite brief flashes when Liverpool threatened near Barca’s box.

#4 Coutinho and Suarez watch against their former side 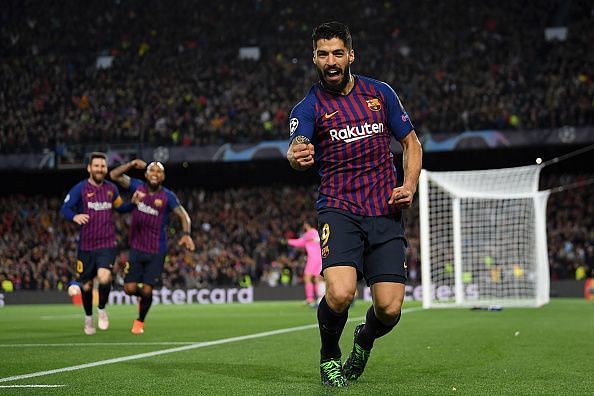 Despite an encouraging start to proceedings, Philippe Coutinho endured another frustrating display and this time it happened to be against his former side.

Much has been said about Liverpool and their improvements since the Brazilian’s departure in January 2018, although it’s not a fair comparison given how long he was there and the consequent time since his big-money move.

He started brightly and tested Alisson from 20 yards after good build-up play alongside Messi, before doing the same a minute later – though he was correctly ruled as offside. After that, he often ran into cul-de-sacs and rather flattered to deceive, something that has been the case far too often for Barca’s liking since his arrival. Unsurprisingly replaced just before the hour mark for a determined Nelson Semedo, it wasn’t the fairytale display he would have hoped for.

As for Suarez, well, it was a typical Luis Suarez performance from the tireless Uruguayan. Liverpool might have quietly hoped he’d have mercy on them, but there’s never a dull day when Luis is around. He showed great awareness to split Liverpool’s centre-backs before composure proved key in slotting home beyond Alisson after Jordi Alba’s delightful low cross in the box.

Yet over the 90 minutes, he only had 37 touches, 72.7% pass completion rate and was dispossessed twice, while missing the big chance (hitting the crossbar) from which Messi finished the rebound.

With four completed dribbles, two fouls committed, constantly straying offside and simply persistent in his attempts to baffle Liverpool’s backline, it was a typical display from an experienced forward who knew precisely what he had to do to get under the Reds’ skin. He did so to perfection and relishes the role of pantomime villain. 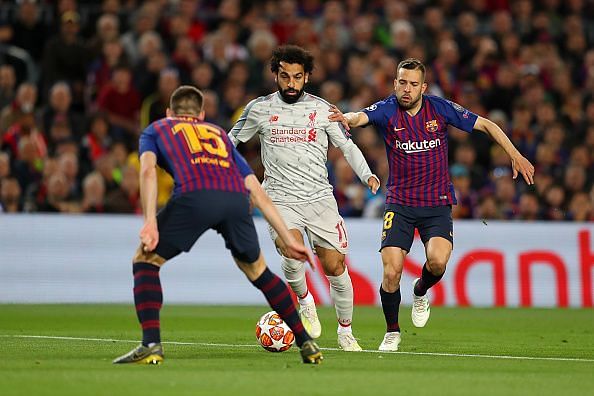 Salah was a livewire in the first-half and caused Barca all sorts of problems, but waned after the break

Mohamed Salah was playing like a man possessed – in a good way – during an intriguing first-half. He caused both Jordi Alba and Clement Lenglet all sorts of problems with his movement and close-control dribbling, while getting the latter booked after leaving him for dead in a one-on-one duel down the far side. Threatening and ever-present in his attempts to propel Liverpool forward, he was a nuisance and often looked like scoring whenever advancing towards the box.

In the second-half however, that had completely shifted. He found himself on the periphery too often as Barca held a slender lead, though his curling low strike which ter Stegen tipped past the post was hopefully a sign of things to come – he’d return to his purposeful, tenacious self in the final third.

Instead he was more wasteful: decision-making was skewed, not making the same runs nor enjoying as much success against a wiser Lenglet, while he hit the post with the goal gaping late on too.

It typified the Egyptian’s struggles this season: we’ve seen him at his free-flowing best but equally at his worst, where he misses great chances, rushes decisions or makes poor choices when pressure is at its highest. Despite an excellent first-half, he wilted when it mattered most and Liverpool find themselves a mountain to climb at Anfield next week now, courtesy of poor finishing. 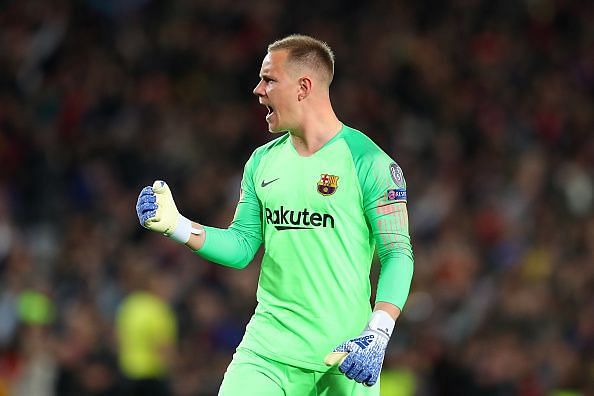 The point itself says it all: ter Stegen is Barca’s impenetrable wall. Even when his teammates are nervy, make mistakes or invite opposition pressure on his goal, the German is never fazed. It’s another reason why they have such confidence in him, as one of the world’s best, to pull off important saves when called upon.

On another night, against another ‘keeper, Liverpool would be travelling back to Merseyside with at least two away goals in their favour. Instead they find themselves with none, a mountain to climb and although some of that is down to Messi’s brilliance, it’s also testament to ter Stegen’s influence between the posts.

Salah’s second-half effort was creeping in at the far post, while Milner curled one which was destined for the corner too. He defiantly denied both with acrobatic low stops, as well as the Englishman’s close-range strike – he comfortably smothered that between his gloves like it was nothing.

He has kept more clean sheets at the Camp Nou in Champions League knockout games (7) than he has conceded goals (5). That is a ridiculous statistic but the 26-year-old’s ability to make shots he faces seem easier than they are, coupled with the commanding presence he has at the back for Barca, is part of the reason for his success.

This was his 23rd clean sheet of the campaign (all comps) and with 48 matches under his belt, he continues to excel with more experience earned along the way. Although critics are quick to point out flaws and goalkeeping mistakes, Mats still doesn’t get enough credit. 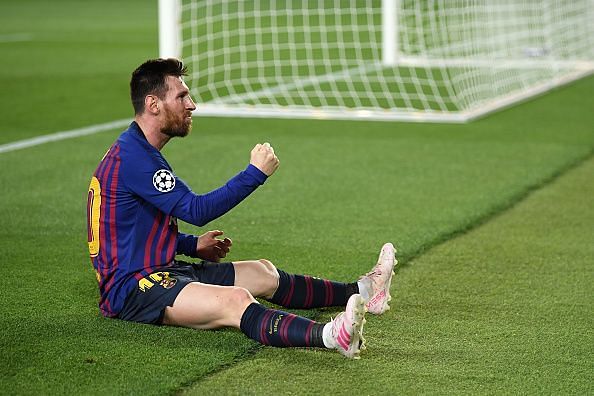 Messi came up clutch again when Barca needed him most, despite limited attacking support

Messi magic rules supreme again. As it has on countless occasions this season alone, Lionel Messi dazzled his individual brilliance once more to put a wasteful Liverpool to the sword – while scoring his 600th career goal in style.

The narrative that he struggles against English teams has long been destroyed, though critics persist with suggestions that he doesn’t deliver when the pressure is at its peak. Well, he continues silencing those whispers and does it so emphatically. The evolution of his game means that dropping deeper and seeing him float across various positions shouldn’t be surprising.

He’s 32 next month – preserving his ridiculous goalscoring output while enhancing his playmaking abilities will improve the Argentine’s longevity, though it seems some commentators still don’t understand that when they watch him at work. Claiming he was “quiet” during sustained periods of Liverpool pressure, Lionel suddenly burst into life and Barca’s lead had tripled within a flash.

But like I said on the weekend, it was imperative Liverpool did their homework on Lionel if they were to stand any chance of winning here. They certainly did not. Affording him too much space to roam forward, even with players attempting to cut off passing lanes and pressuring him into mistakes, meant he could dictate attacks at his own pace. When you’re a goal down at the Camp Nou and need an away goal, that’s never a good thing.

Nine completed dribbles to accompany a key pass created and four fouls won, he continued to spray inviting balls for teammates – despite lacking consistent attacking support and runners from midfield. After being rewarded for opportune timing to convert from close-range for Barca’s second, he completed his brace with a beautiful free-kick strike 30 yards out – his eighth from direct set-pieces this campaign, a career-high for the magician.

600 career goals, complete. A three-goal advantage to take with them as a raucous Anfield awaits next Tuesday, sealed. Messi once again ensures his side have one foot firmly in this month’s Champions League Final.