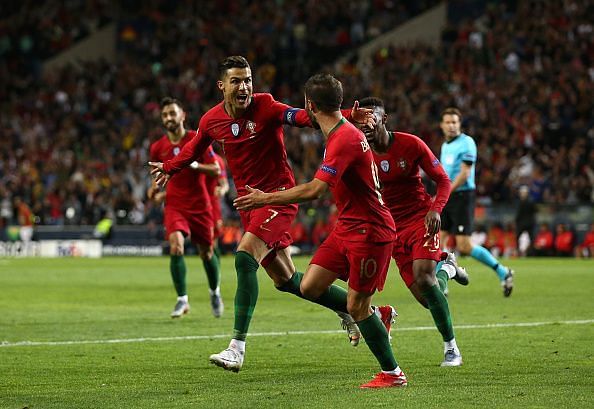 Cristiano Ronaldo‘s hat-trick proved enough for Portugal to squeeze past a valiant Switzerland, who, with the victory, earned their place in Sunday’s UEFA Nations League final.

They will play the winner of today’s other semi-final between England and the Netherlands, after the Juventus forward continued his impressive goal-scoring record in major tournaments. Since his international debut in 2003, he has now netted in ten major tournaments and despite turning 34 earlier this season, Ronaldo remains their focal point in attack.

AC Milan fullback Ricardo Rodriguez levelled the scoring with a penalty after Barcelona’s Nelson Semedo was adjudged to have hauled down Stuttgart’s Steven Zuber in the area, before captain Ronaldo led by example deep in the second-half.

Having broken the deadlock with a free-kick, he helped them retake the lead with a blistering strike at Yann Sommer’s near post – before curling one into the bottom corner on a counter-attack just two minutes afterwards.

The Swiss, despite their best efforts, were made to pay for wasteful finishing and questionable decision-making in midfield at times when Portugal were there for the taking. Without further ado, here’s a look at five talking points from their late win in Porto.

#5 Silva and Zakaria battle as Carvalho and Xhaka wilt 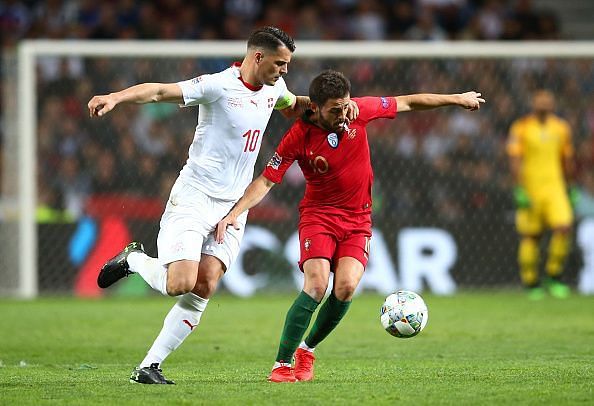 Call me a critic but the sight of Bernardo Silva darting beyond Granit Xhaka, only to be cynically hauled back by his midfield counterpart, felt like deja vu.

The pair have battled on a few occasions previously in the Premier League and while Bernardo is already a two-time Premier League champion with Manchester City, Xhaka’s future is in unfamiliar territory this summer as he could depart Arsenal before next season begins.

Their respective performances rather reflected their contrast in fortunes since joining England’s top-flight: Silva was Portugal’s best performer bar Ronaldo and always looking to create chances from seemingly nothing. A game-high four key passes, four completed dribbles and five tackles won rather speak for themselves.

Meanwhile Xhaka struggled to really impose his presence on the match in midfield. His display will be remembered for relinquishing possession cheaply in the build-up to Ronaldo’s hat-trick sealing goal late on.

Whether or not that’s harsh is for you to decide. In a frustrating watch, despite the scoreline and chances created, both sets of players flickered between impressive and indecisive throughout.

William Carvalho, once so highly-rated, was among those in that mix. Denis Zakaria was Switzerland’s best player, other than Xherdan Shaqiri – orchestrating attacks from deep and looking to pounce on Portugal’s weaknesses.

He did so without necessarily relying on possession either, which is easier said than done. Three tackles, two interceptions and key passes completed, 80% pass accuracy and just 37 touches in 70 minutes show how effective he was without regular service in midfield. 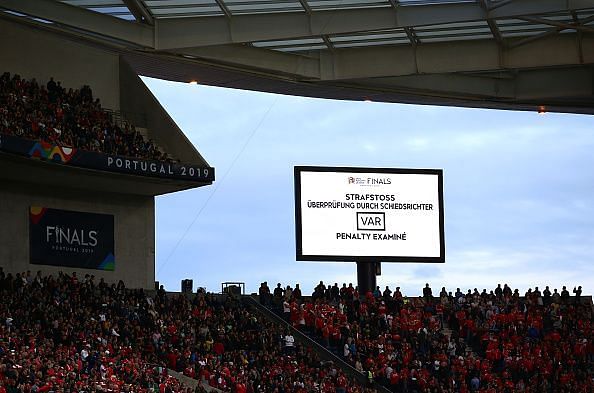 Love it or hate it, VAR seems to be an ever-present debate and in games of this magnitude on the international stage, there’s no respite either. There were two questionable officiating decisions that could and would have changed the complexion of this game entirely, if they were given the other way. One of them certainly should have been, while the other is less clear-cut.

Kevin Mbabu’s sliding challenge to dispossess Ronaldo as he edged closer towards the box was perfectly timed and replays showed the 24-year-old won the ball in the process. Despite this, the referee whistled for a free-kick.

Ronaldo scored from the resulting set-piece, breaking the deadlock after 25 minutes. There was no VAR check, but there should have been one from the officials with their screens, telling the referee to hold off before giving a free-kick in a dangerous position there. If play was allowed to continue as normal, Portugal wouldn’t have scored when they did.

The second isn’t as clear-cut, but still a dubious decision nonetheless. Semedo was adjudged to have impeded Zuber as he shaped to shoot in the box and despite a lengthy delay, the referee reviewed the footage pitchside and pointed to the spot. Rodriguez made no mistake from twelve yards to equalize, but should it have been given in the first place?

As replays clearly show, Semedo had eyes solely fixated on the ball but inadvertently tangled with Zuber and impeded the Stuttgart midfielder – who was in front of him – as he shaped to shoot.

Play was originally allowed to continue as the referee gesticulated for Zuber to get up. The fact it took so long to clarify his decision and that Portugal themselves would have had a penalty down the other end just moments later after a goalmouth scramble, meant the whole sequence was messy.

Should that have been a penalty? Probably. But you can see just by the way I’m analyzing these two incidents the plethora of factors that go into the officials and their thought process, often second-guessing themselves. And in a match as prestigious as this one, a small decision here or there can often prove the difference between winning and losing.

That’s why it’s imperative they get it right and I’d rather they take longer if it meant more clarity and the correct decision every time – something that doesn’t yet happen. 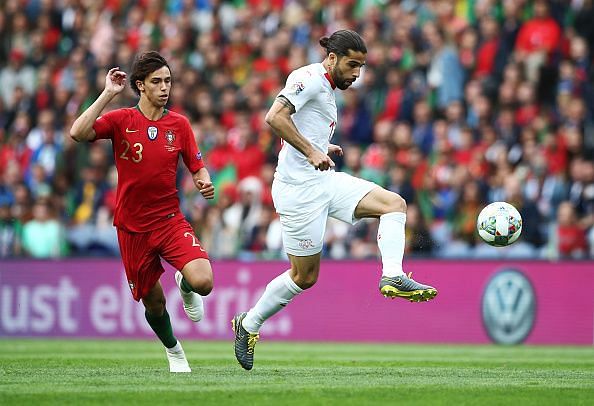 Benfica wonderkid Joao Felix made his long-awaited senior debut for Portugal on this occasion and within a minute, you could already understand the hype surrounding the teenager’s presence.

He almost forced Sommer into a mistake in possession inside the Borussia Monchengladbach goalkeeper’s box and instinctively the crowd could already sense this would be a memorable outing for the 19-year-old.

After all, he has netted 20 goals and created 11 assists in 46 appearances across all competitions. Seemingly all of Europe’s big clubs are monitoring his progress and readying eyewatering bids for the forward’s signature – not least Premier League champions Manchester City and their city rivals United.

Operating on the left-hand side of a 4-2-2-2 formation alongside Ronaldo in his favoured second striker role, he was frequently left isolated and quite frankly struggled. That shouldn’t come as much of a surprise given how little he saw of the ball – a game-low 19 touches speaks volumes.

His passing was unconvincing, dispossessed four times and squandered his one real half-chance, firing high and wildly past goal inside the area after Ronaldo’s brilliant pass, this wasn’t to be his evening.

Replaced for Valencia’s Goncalo Guedes with 20 minutes left, he could only watch from the bench as Ronaldo went to work to seal their late victory. Despite all the fanfare and hype he’s garnered this season, his debut display is a timely reminder that there’s plenty of work left to do and opposition defenders will only wise up as he continues to progress. 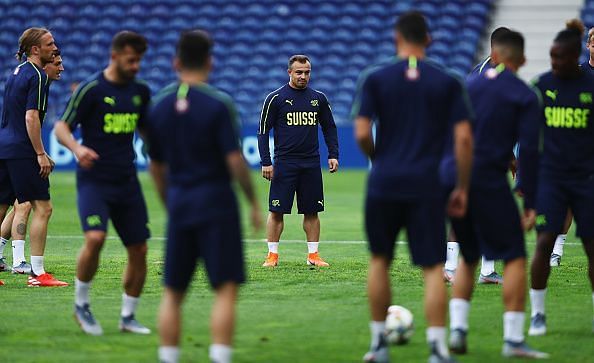 Switzerland’s shortcomings have been evident for a few years now and despite their penalty heartbreak against Poland at Euro 2016 and defeat to Sweden in last summer’s World Cup, it’s clear they haven’t really improved much since then.

Despite a promising backline, solid midfield and impressive attacking talent at their disposal, one thing has been missing for years now: a clinical edge infront of goal, the ability to take chances when they come at a premium and make them count.

Just like in previous tournaments, again they were made to rue their missed opportunities against a ruthless Ronaldo – who wasn’t at his best and yet still managed to score his career hat-trick.

Liverpool’s Xherdan Shaqiri was their best player. Both he and Haris Seferovic squandered a number of early chances to break the deadlock, with Portugal’s backline struggling to cope with a frenetic start to proceedings.

Seferovic hit the crossbar just minutes before half-time and Vladimir Petkovic must have been wondering how his side were not two or three goals ahead at the break. Instead, they found themselves with a slender deficit to overturn and against an unpredictable Portugal side who were likely to turn the screw at any moment, that was always a dangerous proposition.

Despite Rodriguez’s equaliser, they failed to create many clear-cut chances after the interval and Portugal’s pressure eventually told. This would have been a completely different game though, had they managed to convert their chances.

#1 Ronaldo to the rescue once more 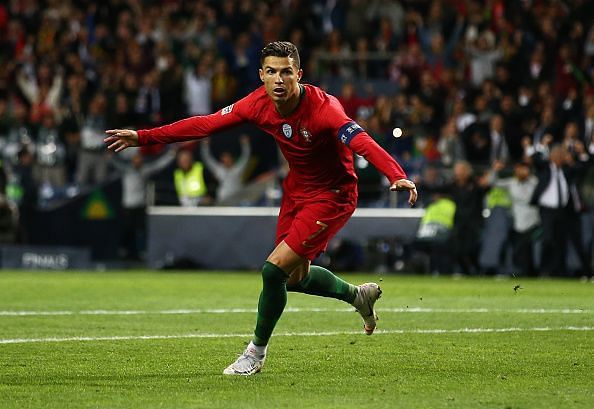 Who else? Ronaldo wheels away to celebrate his 53rd career hat-trick against a valiant Swiss effort

Ronaldo may be 34 and his superhuman goal tally is slowing down, but once again he proved invaluable to Portugal when they needed their talisman most on this occasion.

He netted his 53rd career hat-trick and despite a sluggish start to proceedings, did so with ruthless aplomb against a Switzerland backline that were nervy. He could sense the same and duly punished them with some of the trademark skills he’s become notorious for over his illustrious career to date.

Questions were asked of Sommer’s positioning as he failed to stop Ronaldo’s free-kick but truthfully, he wouldn’t have stopped the strike – regardless of whether he stepped too far to one side or not. His quick-fire brace, with the scores level at 1-1, was well-taken and Switzerland were just helpless to stop him running riot.

It’s also safe to say that both Young Boys fullback Kevin Mbabu and Borussia Dortmund’s Manuel Akanji will not be getting much sleep after that showing. They were torn apart by the Juventus forward, who hadn’t scored in four internationals and not featured in any of their Nations League fixtures to date.

So in scoring that hat-trick, he has now scored in 10 different international tournaments for Portugal. It’s ridiculous to think that this wasn’t even one of his better games and yet, he gleefully took the match ball and deservedly earn plaudits for another match-winning display.

Without him, Portugal would be fighting in Saturday’s third-place playoff match. Instead, they await their fate against either England or the Netherlands this weekend with another opportunity for silverware after a frustrating defeat in the last-16 of last summer’s World Cup. Not bad.