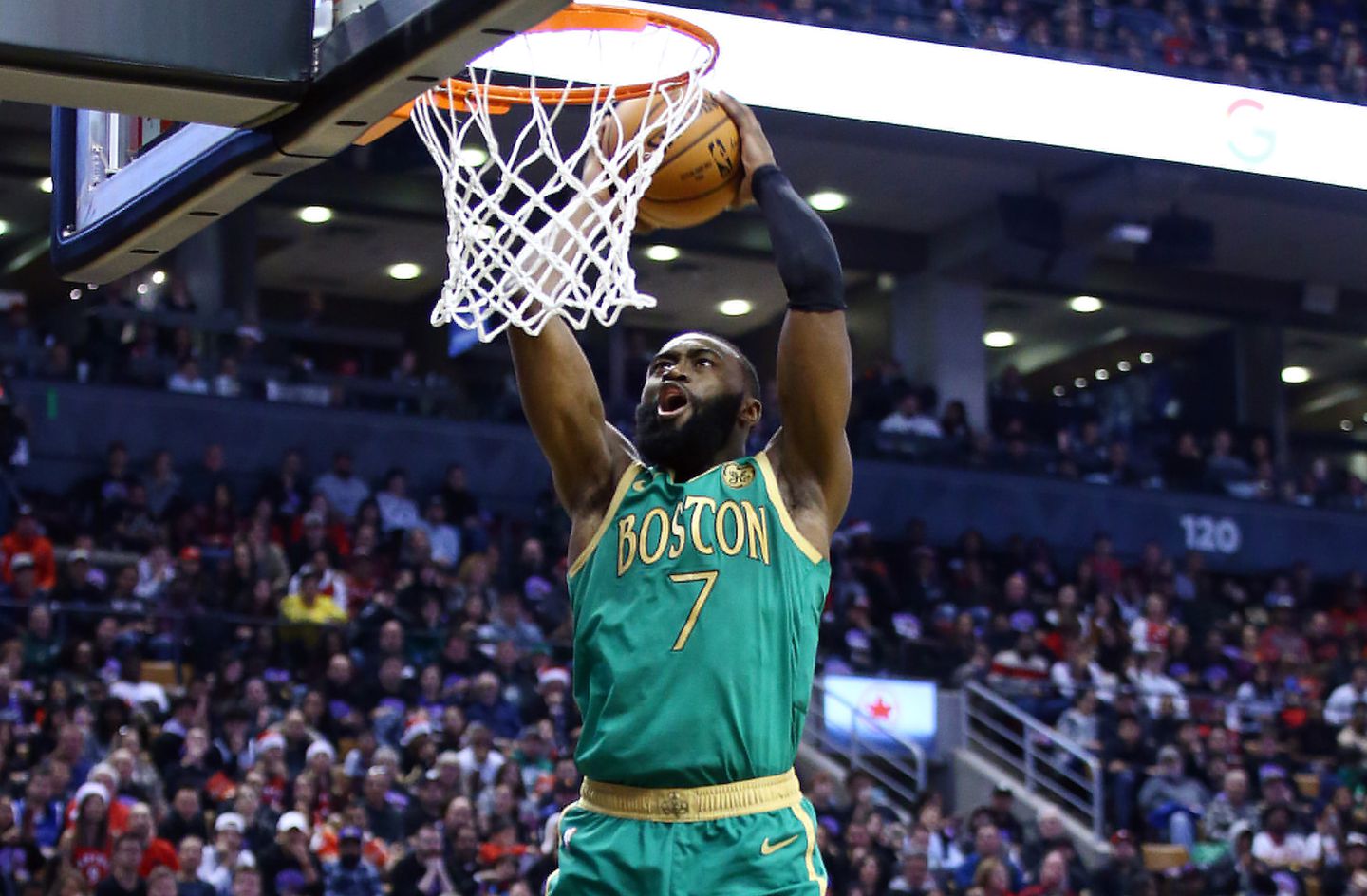 Jaylen Brown scored 30 points on 10/13 shooting with five three-pointers, to break multiple records as the Boston Celtics were victorious in Toronto for the first time since 2015, with a 118-102 win over the weakened Raptors on Christmas Day.

Facing the defending champions is never a straightforward task, regardless of their current roster and how the Raptors responded following Kawhi Leonard’s departure.

Toronto’s only other featured game on Christmas Day was a defeat by the Knicks in 2001, so as the hosts in the day’s first of five matches, players were eager to show precisely why they felt hard done by for the lack of renewed coverage on them in Canada.

They raced to a 10-0 run in the first two minutes, boosted by center Serge Ibaka and All-Star guard Kyle Lowry – both key during their title-winning campaign. After a much-needed timeout, the Celtics embarked on a 9-0 run of their own and despite their sluggish start, eventually settled into proceedings.

Kemba Walker had 13 points and two assists by half-time and Brown – who signed a lucrative four-year extension in the offseason – asserted himself as the pair went to work.

Combining for 52 points in 58 minutes, the Raptors did a good job of limiting Jayson Tatum’s efficiency (5/18, 11 pts, 9 rebs, 6 ast) but couldn’t do enough to deny their backcourt from impressive numbers on the afternoon.

– Celtics are now 14-1 when Jaylen Brown scores 20 points or more
– He became the youngest player in franchise history to score 30 points on Christmas Day
– Before this win, he was 0-6 against Toronto in his career
– They shot 46 for 92 (50%) and are now 8-0 this season when shooting that percentage or better

That, coupled with the absence of their leading scorer Pascal Siakam (groin) and Marc Gasol (hamstring) made it increasingly difficult to envision a late comeback.

Brown had this to say, after his performance: “It was good to get a win here on Christmas. I’ve never won here period, so it was great to just get one.”

Gordon Hayward (foot) had missed the Celtics’ past three games, scored 14 points on 6/9 shooting with six assists and five rebounds in 26 minutes and revealed he’s still feeling ‘a little sore’, but the knock is one he’ll play through.

Brad Stevens acknowledged the fact his side recovered well after going behind early, while Raptors HC Nick Nurse said: “We weren’t quite physical enough, I thought, for most stretches of the game. Scoring is not very easy for us right now, it’s tough.”