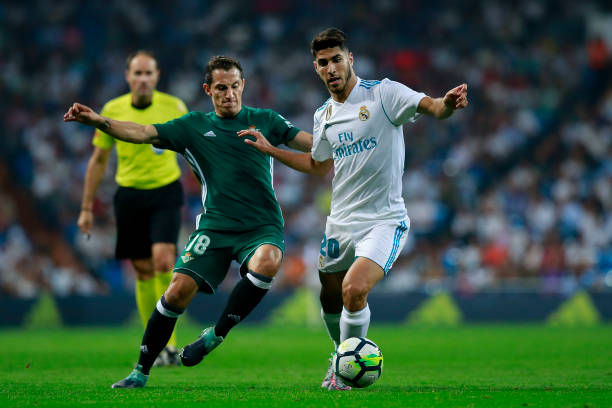 Marco Asensio recently signed a lucrative new deal at Real Madrid. It has since emerged that Toni Kroos is unhappy about the youngster’s vast increase in weekly wages. He has a right to feel disgruntled and here’s why.

After a productive campaign out on-loan at Espanyol, where Asensio netted four and created 15 assists in 37 appearances, the talented Spaniard was keen to make the next step-up. It became increasingly apparent that he’d leave on a permanent basis if Real didn’t grant him more first-team opportunities.

But deep down, that was something the Real Madrid youngster never wanted to do. So, instead, Asensio worked twice as hard to try and attract Zinedine Zidane’s attention. He was desperate for a chance to prove his credentials.

His performance for Los Blancos in the dramatic 3-2 UEFA Super Cup victory over Sevilla was the major breakthrough. Asensio broke the deadlock with an excellent strike from range, something that we’ve recently come to expect, while also showcasing his ability to create another dimension in the final third.

This display demonstrated that he should feature in Zidane’s first-team plans. However, not many would’ve predicted the significant impact he was about to make – especially as he featured regularly from the bench.

Just over a year on, Asensio has been heralded as one of the world’s best young footballers; an asset Real Madrid can potentially build teams around in future.

Considering he was relatively unknown not too long ago, it’s remarkable that the 21-year-old has managed to build a strong following from supporters and neutrals alike. Part of the reason being Asensio’s exciting playing style; a creative midfielder who is unafraid to take risks. It usually pays off.

The Spanish U21s reached the final of summer’s European Championships. Asensio was a key component of their success. Since then, he’s earned senior call-ups and will be hoping to continue his progression on the international scene.

In the past year, Asensio has developed, enhanced his reputation and proved his ability as one of the best within his age-group. His outstanding performances attracted attention. Liverpool and Arsenal were reportedly considering activating his previous release clause: £72million. The Real Madrid youngster has since revealed he wasn’t seeking a move away from the Bernabeú. Why would he? Asensio has gone on to feature in all seven La Liga fixtures this season, either on the left flank or in the number ten role.

Keen to avoid a repeat of Barcelona’s Neymar situation, Real have tried to appease their star players by offering new deals with increased release clause fees inserted. Asensio’s individual figure is in excess of £400m, which highlights the club’s strong stance on players’ long-term futures. It also proves how much trust has been placed in Marco Asensio.

Kroos’ opinion, given his ability, a fair one

Crucially, Asensio’s new deal is believed to include weekly wages which are around the same figure as Kroos’ £156k-a-week. It has since emerged that the 27-year-old is among the Real Madrid players unhappy about the situation.

Since arriving for €25m from Bundesliga champions Bayern Munich three years ago, Kroos has excelled in Spain. Highly regarded as being among the world’s best midfielders, you’d be excused for thinking this situation wouldn’t be much of an issue.

Having made over 150 club appearances whilst progressing as a regular for Germany, it’s surprising that Kroos’ current wage doesn’t reflect his importance and consistency. Given the transfer inflation levels, which have massively increased in recent years, the €25m fee looks more of a bargain as time passes. That’s something Kroos’ agent, Volker Struth, was keen to stress last month.

Does this point to an error on Real’s part?

Kroos’ belief is clear: he should be earning more than a 21-year-old starlet. After all, the Spaniard is yet to prove his ability long-term – whereas Kroos has been performing at the top for a number of years.

It would be a natural reaction for Real to respond quickly, appeasing Kroos by offering improved terms. But they’ll have to be careful. Previously, contract talks stalled at Bayern when he felt they should’ve offered more to justify remaining beyond his existing one-year deal.

Kroos extended his contract with Real, until 2022, twelve months ago. So the Bayern situation won’t repeat itself. However, Bernabeu unrest could still prove a problem as Kroos is not the only senior player that is unhappy about Asensio’s bumper deal.

Florentino Perez will be wary of the domino effect. A handful of players extended their deals in summer; some may try to replicate Kroos to earn more money. Cristiano Ronaldo has done this on a few occasions in the past, while Sergio Ramos was reportedly ‘on the verge’ of a move to Manchester United before penning a new five-year deal with Real in 2015.

Marco Asensio is an exciting young talent but one that is far from the finished product. Giving him a new lucrative deal has created unwanted situations. It’s all come at a point in the campaign where Real Madrid must focus on their performances as opposed to off-pitch distractions.