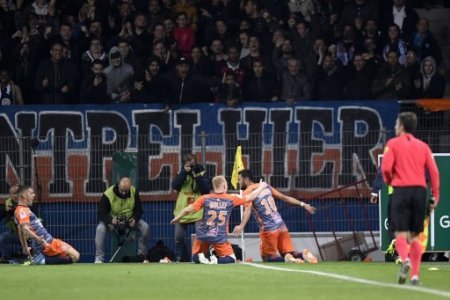 Gaetan Laborde’s well-taken brace – as well as a first league goal for Paul Lasne – were enough to propel Montpellier into second in the Ligue 1 standings after an accomplished display this evening.

Prior to this, the hosts had won only once against Marseille in their previous seven meetings. With that being said, they would have been quietly bullish about their chances of all three points given such impressive form to start the season.

After Valere Germain and Dimitri Payet came close with first-half efforts, Montpellier knew they needed a response after the interval.

That’s precisely what they got, just minutes after the restart. Laborde broke the deadlock at the end of some beautiful build-up play on the edge of the box. Ruben Aguilar lofted the ball into his path with a perfectly-weighted pass, which allowed him to head low into the bottom corner – leaving goalkeeper Steve Mandanda helpless.

Adil Rami was being exposed at the heart of Marseille’s backline and if not for an important sliding interception by Boubacar Kamara, it would’ve been 2-0 sooner. Laborde weaved his way beyond the 32-year-old, who swung wildly at the ball and completely missed.

This was undoubtedly a scare but equally a sign of foreshadowing too. Two minutes later, Kamara missed a clearance attempt before fullback Jordan Amavi had two chances to hoof the ball away. He wilted under the pressure, was dispossessed in the box and could only watch as Laborde curled his strike into the bottom corner despite Mandanda’s best efforts.

The evening’s best finish was yet to come. Four passes in quick transition from the halfway line and players were soon wheeling away to celebrate another goal.

A cross-field pass saw the ball teed up by Florent Mollet for Lasne, who took a touch to set himself before striking into the bottom corner. Mandanda was perhaps unlucky with the previous strike, but there was no stopping that one.

In the day’s other fixtures, Saint-Etienne beat Angers 4-3 while Nantes thrashed Guingamp 5-0.

Record-breakers PSG were narrow 2-1 winners over Lille on Friday evening, courtesy of goals from Kylian Mbappé and Neymar. Lyon who sit fourth, drew 1-1 with Bordeaux – while Rennes and Nice won.

Strasbourg drew 1-1 with Toulouse, while Thierry Henry’s tenure at AS Monaco is still winless after four matches. They lost 1-0 away against Stade Reims.