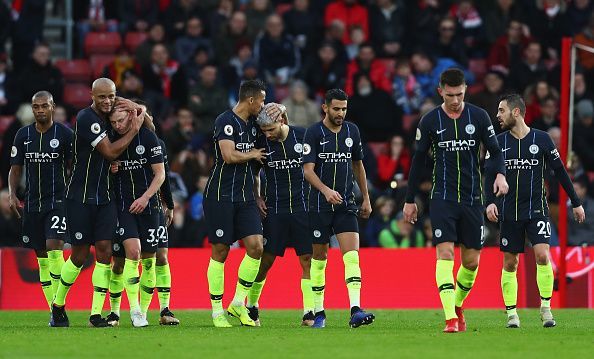 Manchester City earned a hard-fought victory against Southampton at St. Mary’s, but what were five talking points from the game?

Goals from David Silva, Sergio Aguero and a James Ward-Prowse own goal proved enough for defending champions Manchester City to earn a hard-fought win against Southampton at St. Mary’s, closing the gap on leaders Liverpool back to seven points after their emphatic 5-1 victory over Arsenal on Saturday evening.

After successive defeats against Crystal Palace and Leicester City, it was imperative Pep Guardiola’s men returned to winning ways ahead of 2019.

Despite Silva’s early opener, this game threatened to be another surprise defeat for the Citizens. Pierre-Emile Hojberg equalized in emphatic style after capitalising on Oleksandr Zinchenko’s mistake in possession after 37 minutes.

Quick-fire goals on the stroke of half-time saw City restore their lead and despite squandering goalscoring opportunities, they were dominant in possession and earned a deserved victory on this occasion. With all of that in mind, here’s a look at five talking points from a telling result. 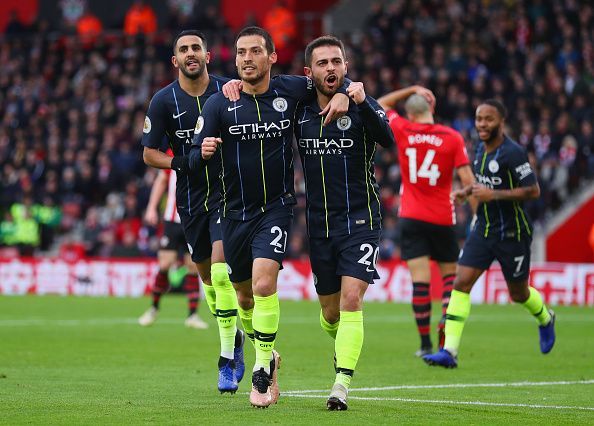 In this game, City recorded 14 attempts on goal and scored three. When you factor in the quality of their strikes – it’s understandable that you’d expect them to convert more of their promising opportunities.

Aguero forced Alex McCarthy into an important save from close-range, while Riyad Mahrez was regularly wasteful in the final third. Over their last five league matches, they’ve now recorded 71 shot attempts. From them, nine goals have been scored.

It’s not good enough for a side of City’s attacking quality and if you delve deeper into the match statistics, it’s easier to understand why they have lost recently – failing to take their chances when on top in games.

#4 Southampton’s attacking struggles comes back to haunt them 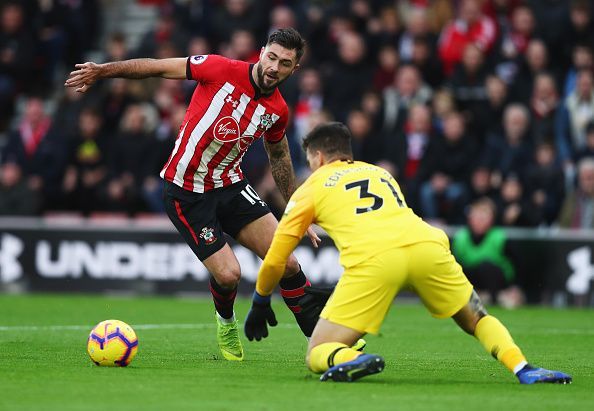 Austin made his second start of December, but crucially struggled to take advantage of promising chances

Southampton have scored a lowly 21 goals in their 20 Premier League games this season. Despite netting 12 of them during the relentless month of December, Ralph Hassenhuttl’s side have struggled for creative consistency.

Constant changing of formation and personnel isn’t bound to help either, though it’s clear the new boss hasn’t yet figured out his strongest eleven. Norwegian forward Mohamed Elyounoussi was granted his first start since late October, while Mario Lemina played in an advanced role and Charlie Austin featured as the hosts’ lone striker.

Danny Ings and Nathan Redmond – two of the Saints’ better attackers – were named among the substitutes. Although the latter was introduced at half-time, he struggled to impose much impact on the game as City were comfortable in possession and rarely allowed their hosts any chances as time wore on in the second half.

Shane Long too was introduced late on, but unsurprisingly was unable to create any chances of note. He hustled and harried City’s backline as he typically does out of possession, though there’s a reason he has only netted five goals in 74 Premier League appearances over the past three seasons – he’s just not a reliable goalscoring outlet. 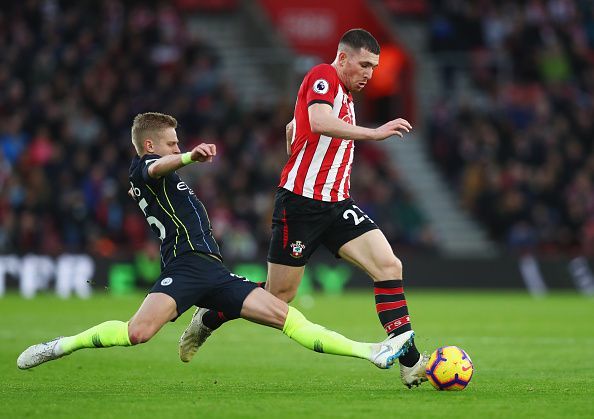 Oleksandr Zinchenko endured a difficult afternoon’s work in his unfamiliar role at left-back once again, deputising with both Benjamin Mendy and Fabian Delph sidelined.

It was his mistake in possession which provided Hojbjerg an opportunity to smash home with aplomb after 37 minutes, while he was fortunate not to have been penalized after his challenge on a marauding Ward-Prowse.

Just moments later at the other end, City retook their slender lead – but it highlighted just how quickly the complexity of the game could’ve worsened for the visitors. Then, it was his delightful delivery fizzed into the box which Aguero met with a well-taken header to double their lead in stoppage-time.

Unsurprisingly, Pep Guardiola was full of praise for the 22-year-old post-match. After all, he didn’t let his mistake faze him, instead insisting that he keep going – regular touches and getting forward where possible, it was an admirable display from a creative midfielder playing out of position.

The Ukrainian rejected Wolves’ advances on deadline day, where they would’ve offered him more first-team action, but performances and experiences like these will stand him in good stead for the future. 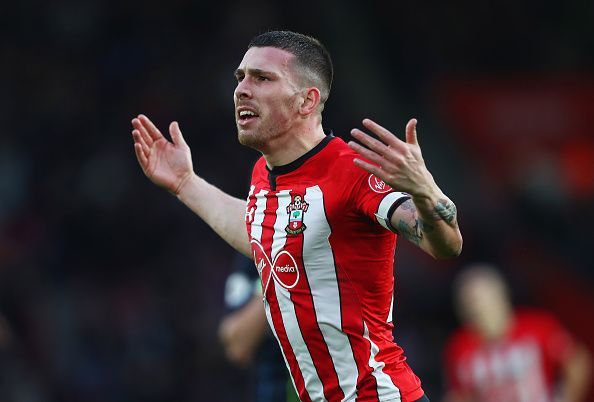 Despite a late sending off, Hojbjerg enjoyed a captain’s performance against his former boss

Despite being sent off for an overzealous challenge on Fernandinho late on, Pierre-Emile Hojbjerg delivered a real captain’s performance for Southampton against his former boss Pep – the pair were together at Bayern.

A tireless display, as usual, he worked hard out of possession and was comfortable with the ball, looking to lead the press and force City players into mistakes. He dispossessed Zinchenko and slam home with aplomb late in the first half and led by example while Lemina – clearly not 100% and Oriol Romeu both struggled to live up to their high standards.

Ward-Prowse meanwhile, was making only his fifth league start of the campaign. He’s regularly either been an unused substitute or making cameos for the Saints this term, but his display on this occasion will surely give Hassenhuttl some selection headaches in midfield going forward.

He was refreshingly versatile and energetic throughout, filling in as a sort of right wing-back – which allowed debutant Ramsay an opportunity to tuck into the center and play as Southampton’s third central defender.

Should’ve had a penalty after Zinchenko’s challenge above and although he was credited with an own goal, it was incredibly unfortunate that Raheem Sterling’s cross took a wicked ricochet off him towards McCarthy’s near post.

His set-piece deliveries were either teasing crosses towards teammates or inaccurate, but his display here is a sign of things to come from a player eager to progress in 2019 after some stagnation in recent seasons. 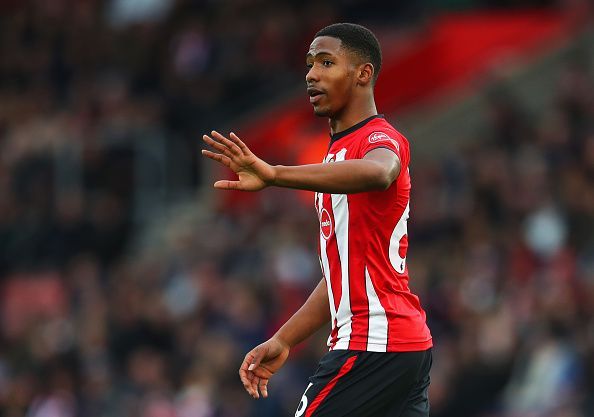 Kayne Ramsay became the youngest player across the division to make a Premier League start at 18 years and 81 days old. Despite City’s 3-1 win here, the former Chelsea academy graduate was the Saints’ best defender and it speaks volumes for the future, which is certainly bright.

He was originally playing at right-back but Ward-Prowse’s versatility allowed him to tuck in as a third central defender. Crucially, he relished the challenge that Raheem Sterling and co posed, so impressively looked settled at the back. Made some good tackles and interceptions against the defending champions, which will only stand him in good stead for the year of 2019.

Vincent Kompany made his second league start since City’s 5-0 win over Burnley in October, which speaks volumes for the Belgian’s persistent injury struggles.

Even still, the captain’s return provided more solidity and composure at the back – which is rarely seen when Nicolas Otamendi partners either Aymeric Laporte or John Stones at centre-back. He partnered Laporte and despite showing initial signs of lacking match sharpness, did well to isolate Austin among Southampton’s attacking options.

Fernandinho was excellent too on his return, showcasing precisely how City have missed him acting as the backline’s shield in defensive midfield. They would’ve been disappointed to see Hojbjerg’s strike fly beyond Ederson to equalize, but Zinchenko’s mistake left him little time to react and he either had to approach for a tackle or back off and let the Danish international strike.

A cynical foul earned him a customary booking midway through the second half, but the 32-year-old wasn’t fazed. Comfortable in possession, as usual, he partners Laporte well as the pair are both composed and help build attacks quickly.