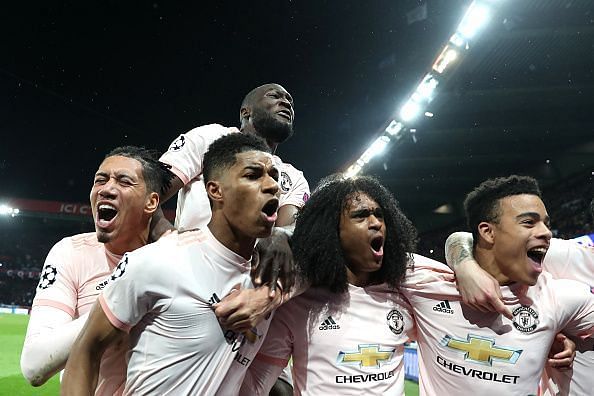 Manchester United’s dramatic 3-1 away win vs. PSG sees them progress into the Champions League quarter-finals, but which players struggled while others excelled on a remarkable night in Paris?

Against all odds, Manchester United did the unthinkable: making history to overturn a 2-0 first leg deficit and beat PSG 3-1 away from home, progressing into the Champions League quarter-finals.

It was not without controversy nor late drama at the Parc des Princes, as Presnel Kimpembe was adjudged to have handled Diogo Dalot’s long-range effort inside the box – after VAR review – and Marcus Rashford showed nerves of steel to emphatically smash home from twelve yards in second-half stoppage time.

Romelu Lukaku’s well-taken brace set the visitors up nicely and despite Juan Bernat’s equaliser, United only needed another unanswered goal to qualify for the last-eight.

Multiple replays and various camera angles showed the decision was at the very least, a debatable one, but United snatching the vital third strike they needed to progress on away goal rules means it mattered little to them. With all of that in mind, here’s a look at five hits and flops from another memorable Champions League night in Paris: Kehrer endured a tough time in defence, gifting Lukaku’s first and struggling to impose himself

This is precisely the type of display that will either make or break Thilo Kehrer at the highest level, in terms of his development going forward.

The 22-year-old German was dispossessed twice and crucially gifted United their early goal with a poor, lazy backpass which Lukaku gratefully pounced upon. Failing to complete any tackles, interceptions, clearances or blocks, he won one aerial duel and committed a foul before unsurprisingly being replaced midway through the second-half.

Those statistics are not good enough, particularly in a must-win match like this – even with United’s limited attacks. Having endured a tough start to his stint in Paris after a £40m move from Bundesliga side Schalke last January, this negative experience and nervy defensive display is one he’ll look to never repeat again. 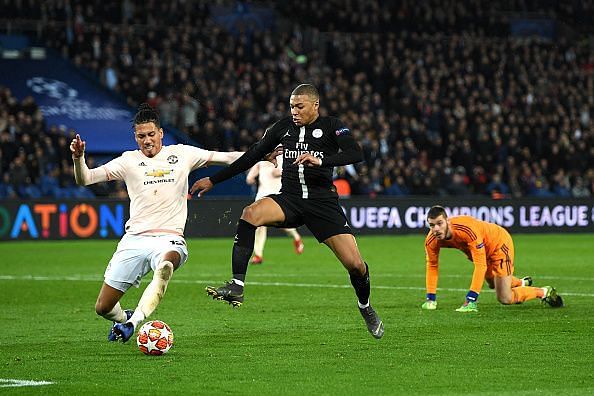 Smalling was excellent and needed to be, against an ever-present PSG side able to score at any moment

Despite the Englishman’s inconsistent form, Chris Smalling shone to deliver arguably his best performance of the campaign. It was certainly one of the 29-year-old’s best against top opposition and needed to be, too.

With a two-goal deficit to overturn, away from home, United had it all to do and even in Neymar’s absence again PSG’s ever-present frontline were not going to make it plain sailing either – this was evident by their early success down the right-hand side, exposing Eric Bailly, playing in an unfamiliar role at right-back.

Smalling completed one tackle, three interceptions, seven clearances, two blocks and committed no fouls on a memorable evening for the visitors. The timing of his defensive interventions had to be inch-perfect and they were, particularly to thwart Kylian Mbappe as the 20-year-old dangerously lurked near goal on a number of occasions. 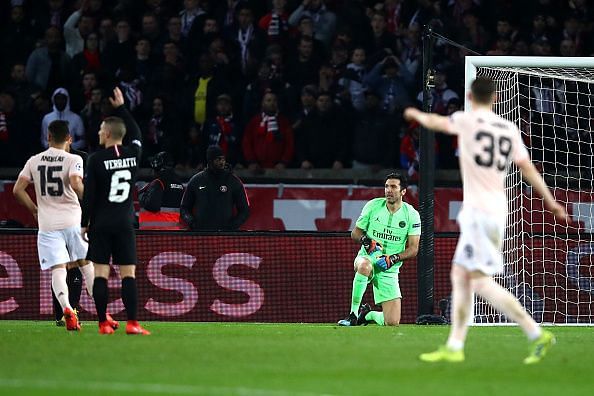 Buffon had an evening to forget, crashing out of the Champions League once again

Much had been said about Buffon’s decision to remain among Europe’s elite when joining PSG on a one-year deal last summer. After all, the Italian legend turned 41 back in January and is clearly beyond his peak years now. If ever there was a game to reiterate that, it was this one.

Although Lukaku’s first strike wasn’t solely his fault, he could and should have at least done more to make it more difficult for the Belgian to score. Instead, he just fell over and it was a futile attempt – rather than to close down his scoring angles or delay him further, giving teammates a chance to scurry back quickly.

As for the second goal, the blame is rightly on his shoulders. Marcus Rashford’s ability to strike a ball with varying degrees of power, swerve and accuracy have been applauded by critics in recent years but even still, Buffon shouldn’t have struggled as much as he did with the 21-year-old’s effort from range.

It’s not the fact he fumbled the strike, but rather the slow reactions which led to that action to begin with – as well as afterwards, allowing Lukaku to follow up with the rebound, which compounded it.

For all his leadership qualities, he didn’t exude much confidence onto the PSG backline. Instead, he struggled even more so than Kehrer and others did. There was nothing he could do to stop Rashford’s well-taken penalty strike, but at this point, the damage had already been done. 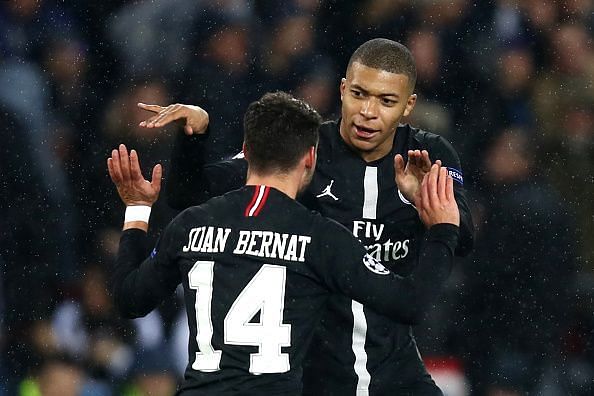 Bernat celebrates his equaliser with Mbappe, on an evening where the Spaniard didn’t deserve to lose

Football is a cruel game and it’ll be tough for PSG players to sleep after relinquishing another promising advantage among Europe’s elite. Attack-minded fullback Juan Bernat was one of few players who deserved to be on the winning side, though was unfortunate in defeat on this occasion.

His match statistics speak for themselves. 91.8% pass accuracy, four aerial duels won, three tackles, two interceptions and clearances completed, no fouls committed. An important equaliser and hit the post too? Frustrating isn’t the right word to describe how the left-back will be feeling, though his presence – both in attack and defensively – were important as PSG probed and picked their moments to accelerate forward in numbers.

He enjoyed a good battle with substitute Diogo Dalot when the teenager drove forward and pounced on Eric Bailly’s costly error to sneak in unmarked and slot home from Kylian Mbappe’s clever pass across the box in the first-half. Despite the hosts’ attacking potential and talent in abundance, that was ultimately as good as it got for them. Matchwinner. Much has been said about the Belgian’s poor conversion rate and plethora of big chances he misses – but Romelu displayed the goalscoring instinct and attacking intelligence which prompted United to splash £75m for his services two years ago and made no mistake in the biggest game of their season to date.

Neither goal was pretty by any means, but they didn’t need to be. He showed excellent attacking positioning to race ahead of Buffon and slot home the rebound after Rashford’s effort was parried. His first meanwhile, set the tone on a night where United needed forward momentum in a difficult away fixture and got exactly that from minute one, as the 26-year-old pounced on Kehrer’s mistake before leaving the hosts simply stunned.

You could tell it had stifled Les Parisiens‘ defensive plans and although Bernat’s equaliser suggested their swift response was a sign of things to come, they remained nervy at the back particularly following the manner in which Lukaku’s first goal had been conceded from seemingly nothing. A game-high five aerial duels won, three completed dribbles, two shots and two pivotal goals. What more can you ask for?