Mikel Arteta’s Arsenal side claimed the first piece of silverware in what promises to be a compelling 2020-21 campaign, with Pierre Emerick-Aubameyang’s strike sealing a 5-4 penalty shootout victory over Premier League champions Liverpool at Wembley – immediately following an entertaining 1-1 draw in north London. 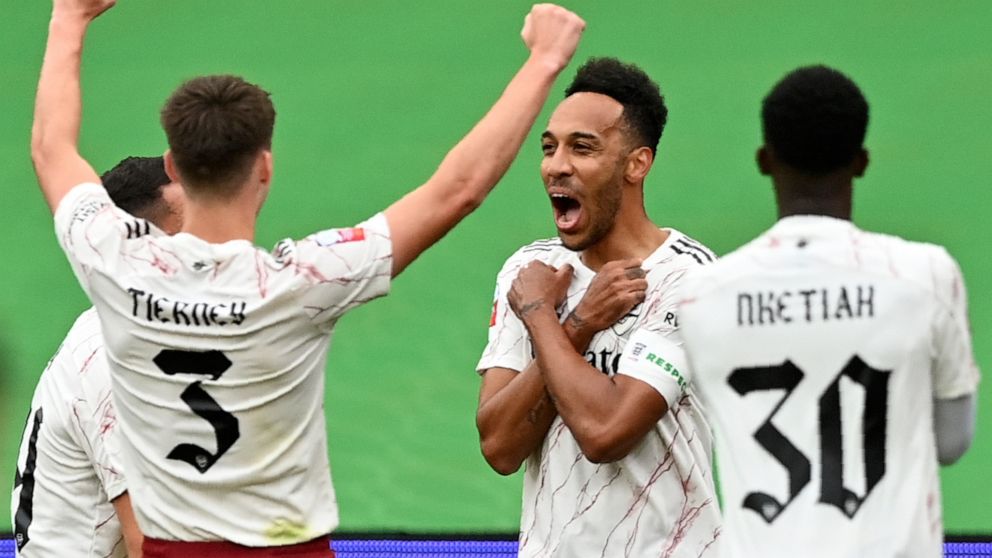 He scored twice against Manchester City in the semis, had a brace to help sink Chelsea in last month’s FA Cup Final and again, Arsenal’s captain led from the front at Wembley.

In a curtain-raiser where both sides missed key players, Arteta’s men refused to make excuses for their absences and proved the better team – despite absorbing pressure.

Andy Robertson’s persistence to constantly deliver dangerous crosses was an ever-present threat the Gunners needed to defend against, though they did well enough.

Virgil van Dijk – who had a header correctly disallowed for offside – was inches away from equalising at the far post, while Sadio Mane and James Milner threatened too.

In Trent Alexander-Arnold’s absence through injury, Neco Williams was given a difficult afternoon against the Ainsley Maitland-Niles – Auba combo down the left-hand side.

Gunners’ persistence with distribution from defence pays off

Arsenal showcased the double-edged sword to playing out from the back, as Emiliano Martinez’s distribution was iffy while his defensive teammates – besides Rob Holding – weren’t much better either.

However, an intricate move – started by Martinez – helped them split a lax Liverpool backline and break the deadlock with aplomb.

Mohamed Elneny, Holding and Hector Bellerin exchanged passes inside their own half from Martinez before the latter fed Bukayo Saka forward past the halfway line.

Saka’s crossfield pass was perfectly-weighted for the Gabon international, who had an overlapping Kieran Tierney for support as Liverpool players scurried backwards.

In truth though, he was always going to shoot from such an inviting position.

He made no mistake, watching it fly past Alisson Becker into the bottom corner with aplomb – adding another goal to his Wembley collection for 2020.

Even after scoring first, you could sense this would be a good test of Arsenal’s defensive capabilities against the champions.

They can be relentless when they want to be and were comfortable with sustained periods of attacking intensity on this occasion, albeit without the final product.

Edward Nketiah had two promising sights of goal in the first-half to add to Arsenal’s lead though, both from counter-attacking opportunities.

The first produced a comfortable low save by Alisson, but his second was skewed well over the crossbar as he attempted to replicate Aubameyang’s earlier finish to no avail.

That was as close as Arsenal got to adding to their slender advantage for a while, as Jurgen Klopp’s side went about business trying to unlock a stubborn backline. 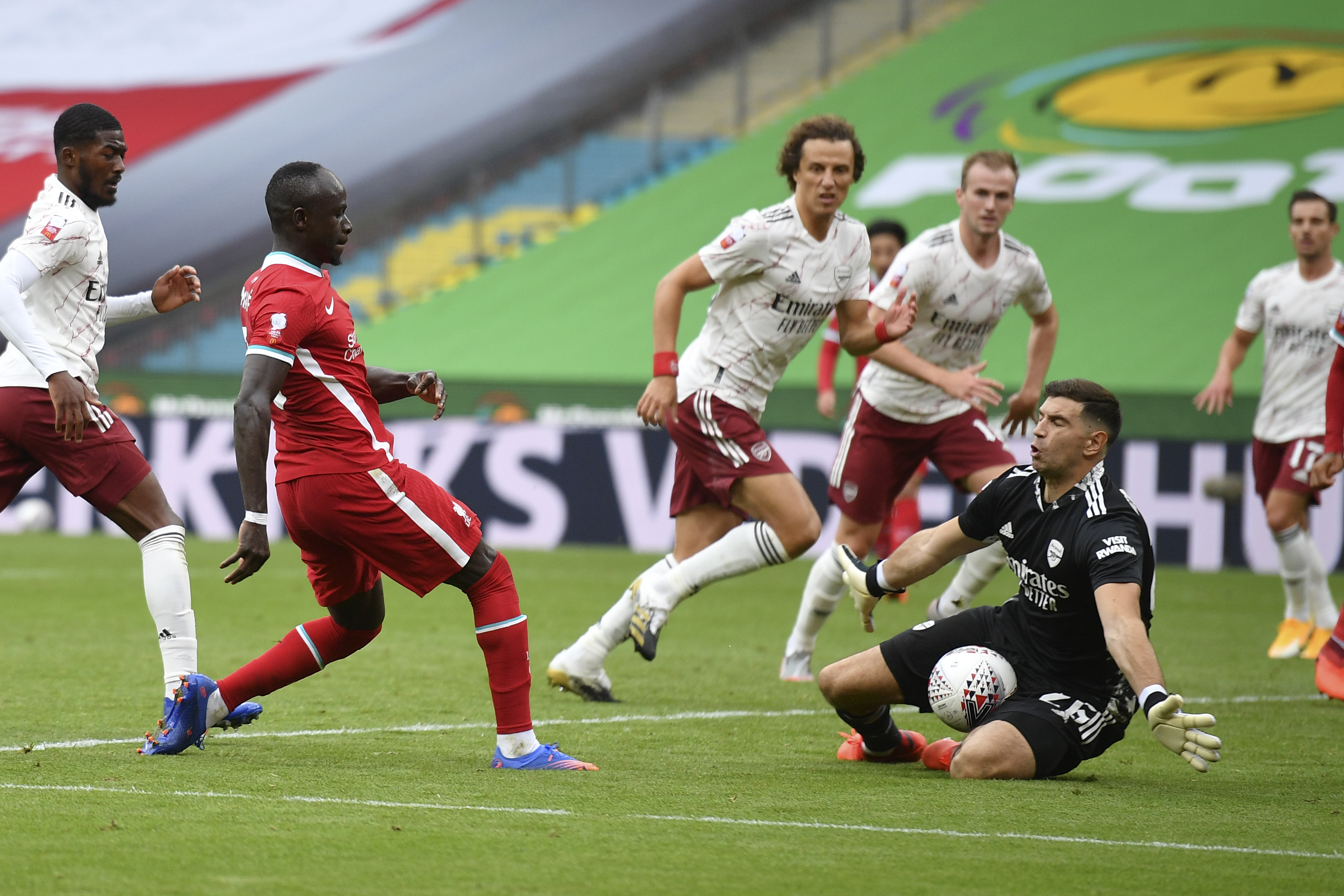 In the second-half, Martinez was forced into making two important saves to thwart Sadio Mane as the Reds looked to punish a high defensive line with their blistering speed.

Robertson’s defence-splitting pass into the Senegal forward was on a plate for Mane, whose angles were suddenly made narrow by an onrushing goalkeeper swarming him.

As both sides made changes just before the hour mark, Mane was again threatening – this time his piercing run into the box was effectively marshalled by an alert Maitland-Niles.

Minamino, off the bench, makes his mark

Two minutes later, Kieran Tierney made an important headed interception as van Dijk lurked behind him from Robertson’s inswinging cross.

Minamino, who won a cheap free-kick for the aforementioned chance, made no mistake from close-range to equalise three minutes afterwards and punish Arsenal’s defence.

The goal won’t win any awards for attractiveness, but was precisely the breakthrough Klopp’s men needed after persistent pressure was continually being repelled.

Mohamed Salah – very quiet here – weaved his way through with a mazy dribble from the edge of the area.

Helped by Saka’s deflected interception attempt and a fortuitous bounce which narrowly evaded Holding, Cedric and David Luiz, he exchanged a one-two with Minamino.

The ball sat nicely for the Japan international, who couldn’t miss and left a sea of Arsenal players looking bemused, expecting VAR’s intervention to keep their clean sheet intact.

It didn’t, the goal stood, and Martinez’s second big stop came to again deny Mane – this time as Tierney misjudged the flight of an aerial challenge and was almost punished.

Arteta made a triple substitution – Tierney, Saka and Nketiah off, as Sead Kolasinac, Joe Willock and Reiss Nelson were introduced.

The latter two were involved as Arsenal could have retaken their lead before full-time.

Cedric’s cross was met by Willock, who wriggled himself between Fabinho and Joe Gomez in the box.

Crucially though, the England under-21 midfielder headed wide from an opportunity that, at the very least, he should have steered on target. He knew just as well.

Rhian Brewster, who came on in stoppage-time, was the cruel loser in the shootout.

He fired his spot-kick onto the crossbar and was left watching with frustration as the rest of the penalties were dispatched with composure by both sides.

Although there are questions over why Klopp took so long to bring him on in the first place, he’ll be hoping for better luck this term.

“This will not harm Rhian. If anyone is to blame, it is me.

I wanted him in the position because he is a real finisher and confident. Today, not. That happens in life and in football.” – Klopp post-match about Brewster.

After all, he’s expected to join Sheffield United on a loan deal after a successful spell with Championship side Swansea last season – he netted 11 goals in 22 appearances.

The Maitland-Niles conundrum, that shouldn’t really be one 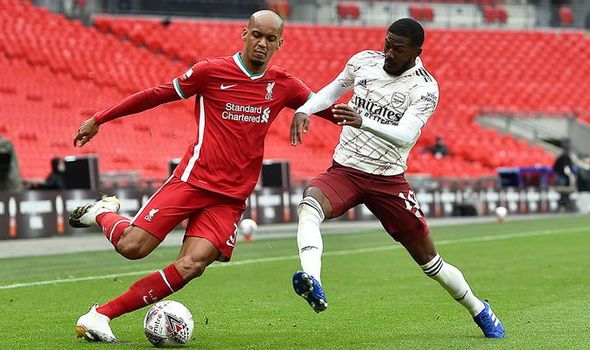 Maitland-Niles in action against Fabinho, during another impressive outing at Wembley

As Maitland-Niles was announced as the Man of the Match winner over the tannoy, you couldn’t really argue with that selection – on his 23rd birthday, no less.

A persistent nuisance and energetic throughout, even when his teammates were visibly tiring, he didn’t relent: instead providing width, marshalling Mane well on a handful of precarious situations, doing so nonchalantly.

Although there were many encouraging displays, this was another showing reinforcing the point that Arsenal would be making a mistake by selling him this summer.

Wolves are reportedly frontrunners for his signature and had a £15m bid rejected this week, with their first-choice right-back Matt Doherty set to join Tottenham imminently.

He’s stressed on a number of occasions that his preferred role isn’t as a wing-back, yet hasn’t been afforded those opportunities to prove himself in central midfield.

He received his first England senior call-up this weekend, already stressed his heart is at Arsenal until told otherwise and there’s no reason why that shouldn’t continue to be the case.