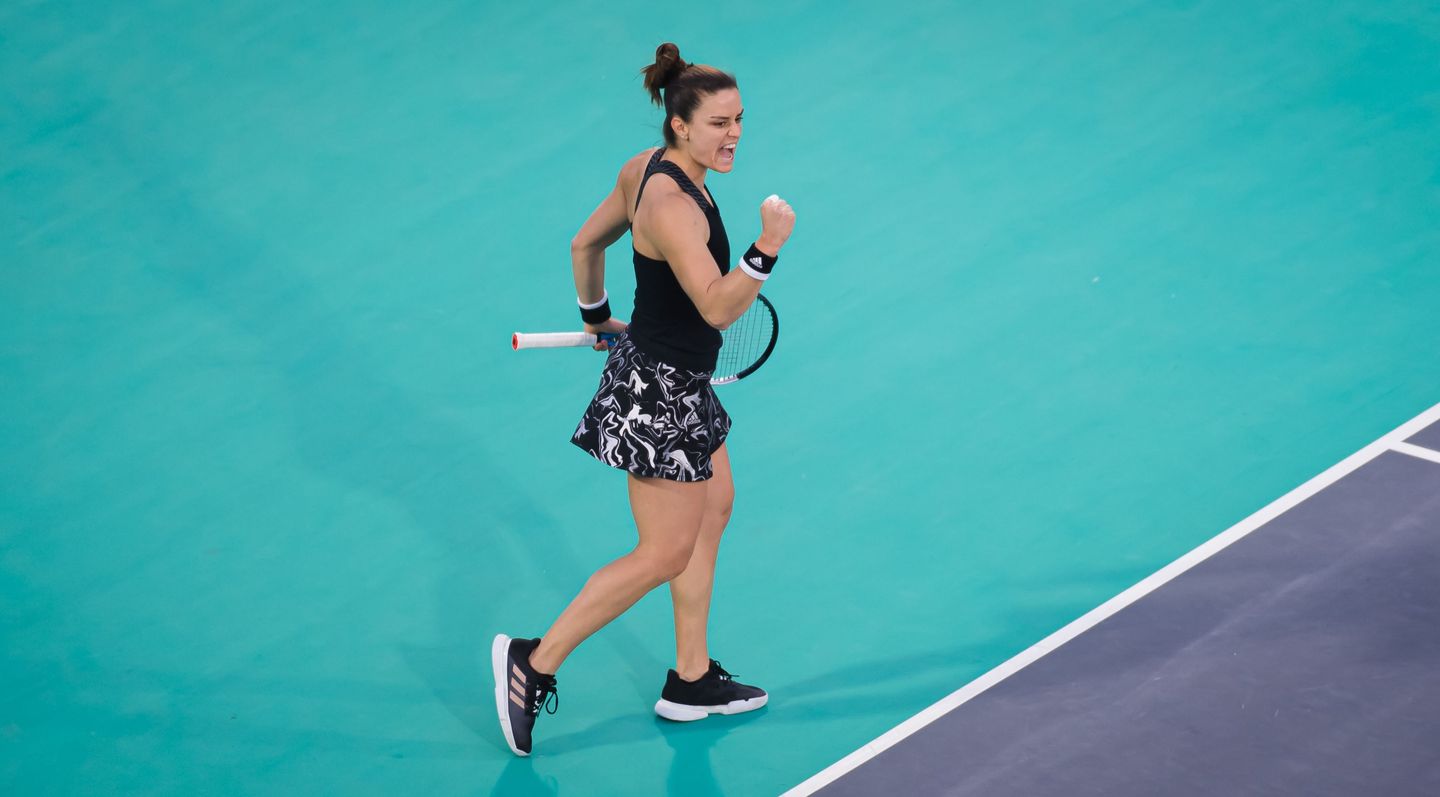 Despite troublesome serving and a sluggish start, Maria Sakkari (#9) recovered from 3-0 down early in the first set to emphatically overcome American teenager Cori Gauff in straight sets: 7-5, 6-2 – setting up a third-round WTA Abu Dhabi encounter vs. Garbine Muguruza (#5) tomorrow. Gauff raced into a three-game lead and was a point away from making it 4-0, but squandered that chance after a poor choice of shot. That indecisiveness ultimately came back to haunt her.

There for the taking

Sakkari’s serve began shakily but defiantly won a second break point opportunity before winning her first game on serve to continue cutting away at an early deficit. Suddenly things had changed: it was soon 3-3 as Gauff missed a volley approach shot and double-faulted on serve.

Quality ball-striking by the Greek manoevured the teenager from left-to-right, forcing her into uncomfortable situations for which she had no adequate answer. It just typified how quickly a game and match’s momentum can shift so drastically, from one point to the next.

New balls arrived and it was initially more of the same. Gauff made four successive unforced errors into the net, providing Sakkari a chance to serve for the first set.

That proved a false dawn. Sakkari’s aggressiveness was channelled the right way after she looked visibly in disbelief that she lost a rally at the net. Two winners – forehand crosscourt and a two-handed backhand – followed two Gauff errors to give Sakkari a 6-5 advantage.

She continued in that vein, taking the first set emphatically with a furious forehand winner that just kissed the far line as Gauff could only watch helplessly. This set was there for the taking and suddenly she had plenty of catch-up to do, against a player she’d lost to at Cincinnati last year.

Sakkari piles on the pressure in set two

After more troublesome serving, Gauff was gifted three break points at 1-1 in the second set. She failed to take any, with another missed forehand typifying her struggles before watching another gritty service game evade her grasp as Sakkari’s passing shot at the net helped her to a 3-1 lead.

You could audibly hear clapping and cheers of encouragement from Gauff’s parents, Candi and Corey, but even they could sense this match had quickly evaded their daughter’s clutches.

Sakkari continued to open up the court, showcasing her ball-striking capabilities while pushing Gauff behind the baseline. It was a perfectly-placed volley at the net which opened up a 5-2 lead, forcing her teenage adversary to serve to stay in the match.

Serving has often proved the 16-year-old’s Achilles heel in her early pro career and today was no exception: successive double-faults and a wayward forehand gifted Sakkari two match points.

After firing a return wide with the first opportunity, she made no mistake with the second: an excellent forehand to fire herself into R3 – where she’ll play Spain’s Garbine Muguruza tomorrow.

In a match that had 15 double-faults and a stop-start pace, the 25-year-old knows she can play much better. She’ll have to, against an unpredictable two-time Slam champion in Muguruza.

Gauff matched her for power but shot selection and serving ultimately let her down on a day where inconsistency proved decisive against one of the tour’s seasoned, ever-improving players.