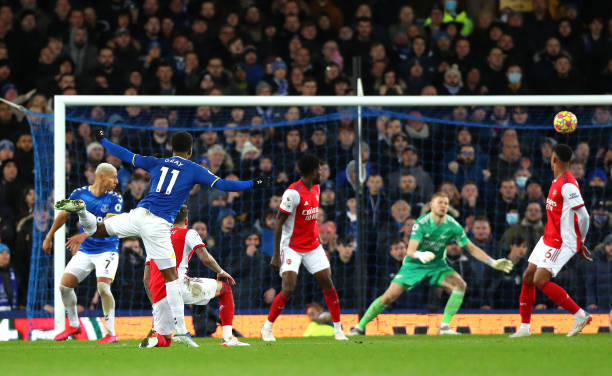 Demarai Gray’s 20-yard screamer ensured Rafa Benitez’s Everton rallied from a goal down late to snatch all three points against a passive Arsenal side – snapping an unwanted eight-match winless streak in the process. Richarlison had two strikes disallowed for marginal offsides after VAR review, but eventually netted their equaliser on an evening packed with twists and turns. 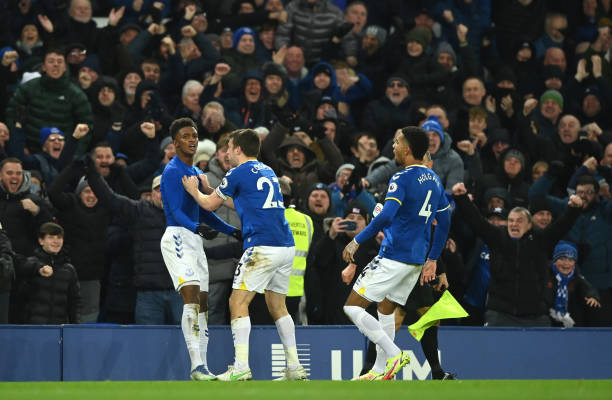 Everton were blown to bits in a 4-1 home thrashing by Merseyside rivals Liverpool, while Arsenal predictably wilted under pressure away against Manchester United 3-2 just 24 hours later.

The hosts have historically proven themselves as one of the Gunners‘ bogey teams, especially on their own patch.

But with a 27th-minute protest seeing dozens of fans leave their seats – referring to their 27-year wait for a trophy – the players produced a resilient display in the face of such hostile frustration.

Richarlison’s season so far, not made any easier than his Olympic adventures in Tokyo finishing just days beforehand, was rather effectively summarised in a 10-second sequence early on.

However, it was also fitting the Brazilian never lost hope here. Those frustrated sighs turned to delirious delight by full-time, which no-one could’ve expected after the half-hour mark.

Ben Godfrey, fortunate not to be booked after leaving Bukayo Saka screaming in agony for a clumsy knee-on-knee foul near the touchline, should’ve been sent off ten minutes later. 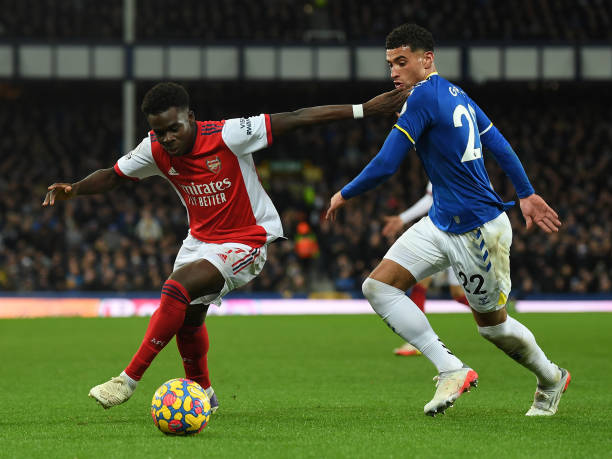 Godfrey (right) was fortunate to still be on the pitch, and made a vital defensive action late on

Yet, after several replays, they concluded no further action was warranted. Whether deliberate or not, only the 23-year-old knows. But intent isn’t foolproof, especially not for serious foul play.

Richarlison set about changing that. First, he won a free-kick in a dangerous position after compatriot Gabriel Magalhaes was overtly physical in a tussle for possession.

Then, he headed Andros Townsend’s delivery into the far corner to briefly break the deadlock. Until VAR intervened, replays showed he was marginally offside and his head was in his hands.

To make matters worse, Arsenal playmaker Martin Odegaard caressed a half-volley from Kieran Tierney’s cross up the other end in stoppage-time to score his second goal in successive games. 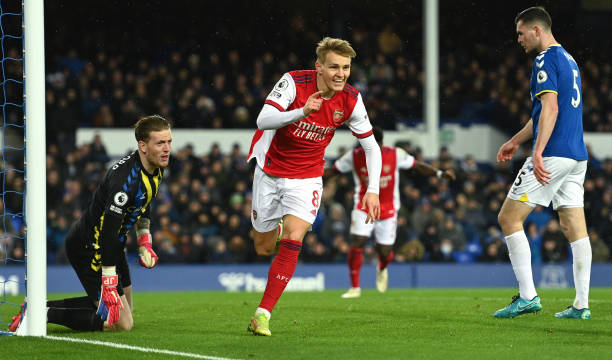 Richarlison was again denied by VAR, this time just before the hour mark after good work by Allan and Abdoulaye Doucoure saw the ball fed into his path, before outfoxing Aaron Ramsdale with a composed finish at his near post. Not once but twice, Mikel Arteta’s men had a reprieve.

Granit Xhaka, making his first appearance since sustaining knee ligament damage in September, got his customary yellow card for a cynical challenge to stop a free-flowing Anthony Gordon run, as Everton probed in search of a long overdue breakthrough.

Both sides made changes, with Nuno Tavares and Edward Nketiah coming on for the visitors while Andre Gomes replaced Townsend. You could sense the tension rising, as Everton were frequently hustling Arsenal into mistakes. Xhaka was walking a tightrope with his booking.

£45m midfield partner Thomas Partey was sloppy in possession while second-half sub Tavares looked a sheepish alternative to Tierney after being roughed up. So unsurprisingly, the latter two played a pivotal role in gifting the Toffees their deserved equaliser after 79 minutes.

Tavares and Partey made a mess of a throw-in in their own half, with Gray’s curling effort hitting the crossbar thanks to Ramsdale’s fingertip save. Such was the England goalkeeper’s acrobatic dive that he couldn’t respond quickly enough as Richarlison headed home the rebound.

As far as Arsenal were concerned, it only got worse. Odegaard had a goalbound effort blocked by Godfrey, who shouldn’t even have been on the pitch to make such a fine defensive intervention.

Then, contract rebel Nketiah could only rattle the post minutes later after good work down the right-hand flank from Saka. On came Pierre-Emerick Aubameyang, ready to save the day.

But there was a reason why Arteta dropped his captain: his form has been tough to watch – and his stoppage-time shank wide spoke volumes. Seamus Coleman made a big block to stop another Odegaard strike in the box, before Gray unleashed a stunner to seal a comeback win. 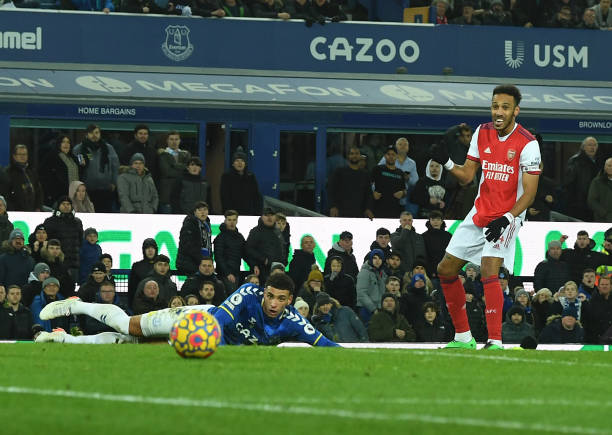 Gomes beat Xhaka to the ball, fed the summer signing to his left and watched as the 24-year-old darted beyond Tomiyasu and Ben White before firing in off the far post from distance.