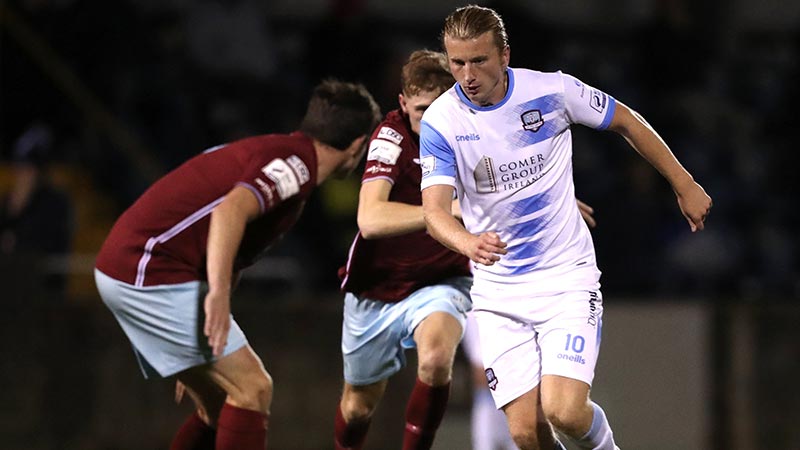 Galway United huffed and puffed their way through proceedings at times, but importantly didn’t lose ground on leaders Cork City in the First Division, as Killian Brouder’s second-half strike settled a hard-fought clash with Cobh Ramblers at Eamonn Deacy Park on Friday night.

Buoyed by a purposeful start, Wilson Waweru could’ve had a hat-trick but lacked the finishing touch and composure in the final third. He forced goalkeeper Andy O’Donoghue into an important stop from close-range on the half-hour mark, but should’ve scored.

Having had a genuine penalty appeal waved away by referee Alan Patchell early on, he fluffed his lines just before half-time after Conor Kearns’ delightful distribution fed him another promising chance.

As the match commentators wondered whether they’d be punished for such wastefulness, Darren Murphy’s men defended astutely without much in the way of respite further forward.

Breandan Frahill and in particular, Harlaib Mbayo, were making multiple key interventions as Galway forced the issue. The latter’s showing was so impressive the home supporters applauded him off the pitch, limping off late on after sustaining a knock he couldn’t continue with.

Beforehand, he was indirectly involved in Galway’s scrappy opener.

It was his block from a powerful strike subsequently leaving him worse for wear, though the hosts broke the deadlock from the resulting corner.

Stephen Walsh, who’d just come off the bench, headed a deep cross into the path of Killian Brouder. After firing a free header over the bar three minutes prior, he simply couldn’t miss again.

There was still time for an equaliser as a frantic few minutes saw action aplenty, with Ireland U19 fullback Alex Murphy and Brouder making emphatic interventions to thwart Cobh on the break.

As time ticked by, another penalty shout – this time for the visitors – was ignored late on. A last-gasp equaliser remained in the offing, but Cobh crumbled with the game’s final kick: a wasted corner helping their hosts breathe a sigh of relief.

They struggled for sustained periods but the ability to win ugly when not at your best will encourage head coach John Caulfield. If they are to win the league this term though, they can’t afford many more outings like this.